Ten years after the release of its first iPhone, Apple executives took the stage Tuesday morning at the brand new Steve Jobs Theater — at the spaceship-like headquarters in its new Apple Park — to unveil the latest updates to the tech giant’s line of signature products.

After a series of recent leaks which seemed to signal much of what Apple had intended to reveal, the company got down to business with its latest high-profile event from Cupertino, Calif., announcing three new iPhones, Apple Watch and Apple TV.

It's a big day at Apple! We are honored and thrilled to host our first keynote at the Steve Jobs Theater this morning. pic.twitter.com/gyiqPJB46y

“One of the ways that I believe that people express their appreciation to the rest of humanity is to make something great, and to put it out,” said Steve Jobs in a voiceover to open the event.

“It was only fitting that Steve should open his theater,” Apple CEO Tim Cook said as he took the stage. “There’s not a day that goes by that we don’t think of him. It has taken some time, but we can now reflect on him with joy instead of sadness.”

Cook called the Jobs Theater the most state-of-the-art, purpose-built theater ever. He said Apple Park was converted from a “sea of asphalt” and now features over 9,000 trees, powered by 100 percent renewable energy.

Before anyone could discuss physical products, where to get your hands on them seemed like a fitting introduction. Angela Ahrendts, Apple SVP of Retail, showed off concepts for Apple Town Square, the company’s reimagining for how Apple Stores will be designed. Among other things, Ahrendts discussed changes coming to the Apple flagship in Manhattan as well as a new store on Chicago’s Magnificent Mile.

Now check out the products:

Cook called the iconic smartphone so “magical” a device that its users forget that it’s a piece of hardware. The iPhone is “far more intelligent and far more personal than ever before,” he said.

Apple’s Phil Schiller discussed the iPhone 8 and iPhone 8 plus:

Cook said the premium iPhone X — not the letter but the number 10 — “will set the path for technology for the next decade.”

“If you were wondering what humanity would do when given access to the most advanced facial recognition ever, you now have your answer,” said Craig Federichi, Apple’s senior vice president of software engineering, as he animated a poop emoji.

An optional new wireless charging mat called AirPower, coming next year, will allow users to charge an iPhone, Watch and AirPods all at the same time from the same device.

Cook called Apple Watch the No. 1 watch in the world before pressing play on a video montage than showcased testimonials from Watch wearers.

Apple’s Jeff Williams ran through a series of improvements from Watch OS 4, including app enhancements for fitness and health monitoring. It will be available to all users on Sept. 19.

“Apple was the last vendor to add 4K to their streamer and the company says it was waiting for the intersection of 4K, HDR10 and Dolby Vision content,” Patrick Moorhead, a Principal Analyst at boutique tech analyst firm Moor Insights & Strategy, told GeekWire. “This is fair, as the new Apple TV is the only streamer that will ship with this capability which supports both standards now. I believe this new Apple TV will result in the biggest Apple TV upgrade cycle the company has ever had as it removed the objection of not having 4K.”

It has been 10 years since Apple released the original iPhone, upending the smartphone industry with its iconic design and usability. The company continues to sell tens of millions of iPhones each quarter, but the growth has been tapering off in recent years. In the most recent quarter, iPhone sales were up 2 percent to 41 million units. 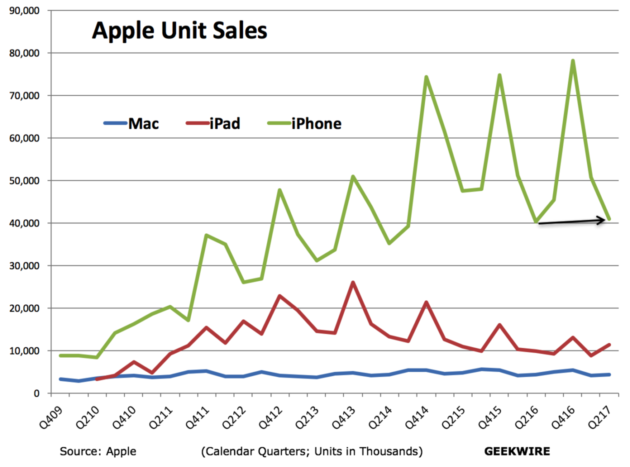