Technology workers have flocked to Silicon Valley for decades, but the Bay Area is facing new competition as a destination for skilled tech workers. Seattle and other cities are becoming increasingly attractive to engineers and scientists, according to a new report from jobs marketplace Hired.

As the Bay Area’s cost of living continues to rise, other cities have been able to capitalize on the situation. In fact, if you account for San Francisco’s cost of living when looking at salaries, Austin, Denver and Seattle all promise a better quality of life.

Seattle, particularly, has seen this growth.

Of the candidates flooding to the city, 24 percent are from Silicon Valley, according to the report, followed by New York, Los Angeles and Boston. Data from Seattle-based real-estate company Redfin corroborates the shift. The company said last February that the amount of people moving to Seattle from San Francisco due to home prices has doubled.

The boom will likely continue. Seattle tech companies offer more jobs to candidates outside the city than to local candidates, and the average salary for candidates who relocate is $2,000 higher than for those from the regional market.

When you look at incentive for people to leave San Francisco and go other places, because their salary will go farther there, it’s just become really dramatic.

While that difference is relatively low compared to other cities — in Chicago, for example, there’s an average $9,000 difference for those who relocate — Dr. Jessica Kirkpatrick, Hired’s data scientist, said it still encourages people to move away from San Francisco.

“When you look at incentive for people to leave San Francisco and go other places, because their salary will go farther there, it’s just become really dramatic,” she said. 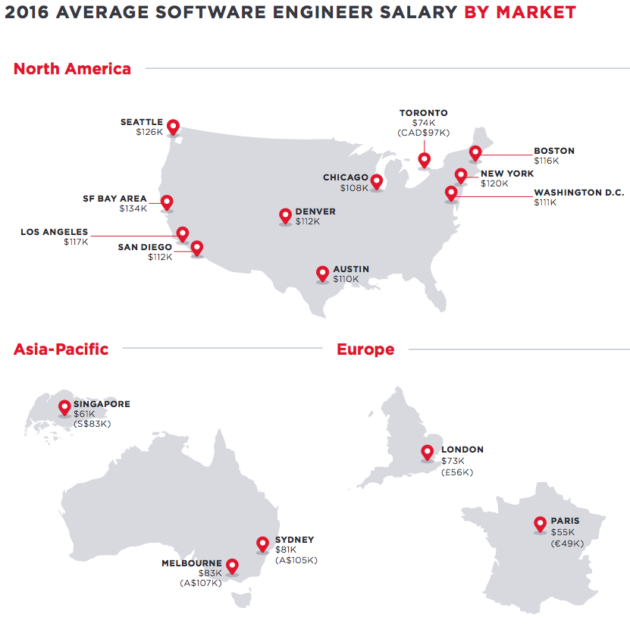 With tech giants such as Amazon, Microsoft and Expedia headquartered in Seattle, plus a growing number of technology startups, the region already has a strong base of tech companies. On top of that, there has been a major influx of Silicon Valley tech titans — such as Google, Facebook and Twitter — setting up engineering centers in the region. GeekWire’s list of engineering outposts operated by companies not headquartered in Seattle now tops more than 80.

Hired’s Kirkpatrick believes Seattle is likely more appealing because it’s on the West Coast and the cost of living is still relatively low. Tech industry salaries in Seattle are also rising. In 2016, salaries rose 2.14 percent, only behind the Bay Area’s 3.28 percent rise.

It’s not just software engineers who are benefiting. According to Hired’s data, product managers and data scientists are also seeing healthy growth, with product managers holding the highest average salary of all three positions.

The tech boom doesn’t benefit everyone equally though. This year, Hired studied the impact of bias on the tech industry’s hiring practices and found discrepancies in salaries when it came to race and age. Although African American candidates are 49 percent more likely to get hired than the average white person, they suffer the most when it comes to salaries. On average, they ask for and are given lower salaries for software engineering jobs in San Francisco and New York.

The report on bias only focuses on the San Francisco and New York markets, because that’s where Hired had enough data to reach conclusions, Kirkpatrick said. However, there wasn’t any discrepancy when it came to other markets.

“We didn’t see any city where there was not a trend of white people being paid more than people of color, and we didn’t see a city that was particularly better or worse,” she said.

While the trend is troubling, Kirkpatrick said it’s not necessarily surprising. Minority candidates tend to ask for a lower salary because their previous salaries have been artificially lowered due to discrimination and bias, she said. Hired hopes this report will give such candidates a better idea of their worth.

“One thing we’re hoping to do, by releasing this data, is have transparency into the problems that are going on in hiring in the tech industry,” Kirkpatrick said. “Hopefully our clients will start looking at their practices and try to understand if they’re having biases in their hiring, and the candidates can understand their market worth.”

The company didn’t include gender bias in its report, but rather will release a separate report in April to coincide with Equal Pay Day, which seeks to raise awareness about the gender gap in salaries.