The region where Amazon established its first headquarters just unveiled a pitch to host its second headquarters, as well.

“Amazon was born here, grew up here, and we believe the company’s future growth should be here,” write King County Executive Dow Constantine and Snohomish County Executive Dave Somers in the 522-page proposal for Amazon’s second headquarters. “By building HQ2 in the Puget Sound region, Amazon will once again challenge conventional wisdom and re-affirm its unique path to success.”

The proposal lists 10 potential sites, five in each county, where Amazon could build the $5 billion, 8-million-square-foot second headquarters. The proposed sites are in Arlington/Marysville, Auburn, Bellevue, Bothell, Everett, Kenmore, Lynnwood, Renton, Tukwila, and the Tulalip Tribes.

“These sites can accommodate Amazon’s second headquarters, or should Amazon decide on a satellite approach, they could be knitted together by our growing and innovative transportation network of light rail, heavy rail, bus rapid transit, and interstates,” the proposal says.

The proposal highlights the Seattle-area’s tech talent pool, startup ecosystem, research universities, and growing public transportation infrastructure. It also focuses on other benefits of the Northwest, like access to outdoor recreation and, yes, even the weather — citing a temperate climate that “allows anyone to take advantage of outdoor recreation year-round.”

In addition, the state submitted a letter to Amazon CEO Jeff Bezos, signed by more than two dozen legislators. “We are proud to have helped Amazon grow from a small tech startup to an international powerhouse. Let’s build on this historic partnership and continue to grow together,” they write.

Cities participating in the King and Snohomish county bid are offering a variety of tax credits and grants for the company, but those incentives are already available under existing state and municipal programs, not created specifically for the Amazon HQ2 proposal.

Speaking at a media briefing earlier this month, Constantine said that each city will have a chance to provide its own “package of opportunities and incentives.” However, he pointed to a prohibition on “gifted public funds” in Washington state. “Unlike some other states, we cannot simply provide cash subsidies to companies in order to come here,” he explained. 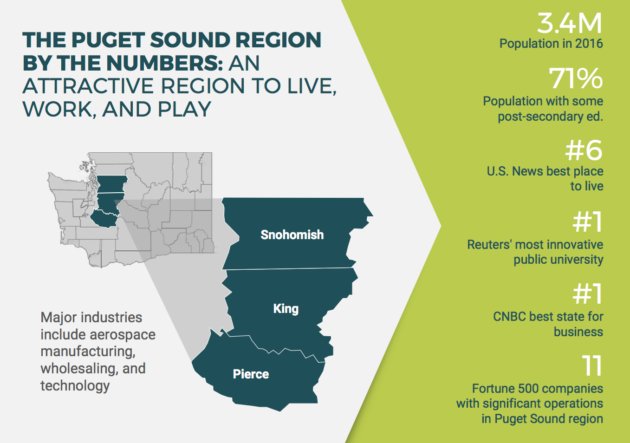 “Specifically, we can work on a statewide push to improve workforce development, especially in computer science and STEM programs at our state universities and technical colleges,” the proposal says. “We have a proven record of streamlining funding and permitting for critical statewide transportation and infrastructure projects. We can do the same for projects targeted at improving traffic and infrastructure in the areas around both your existing campus in Seattle and at any future Amazon locations.”

Bellevue, for example, is prepared to offer 770,000 square feet of office space by 2019 and 3.3 million square feet by 2027. Some of that would come from the Expedia building when the travel giant relocates to Seattle. Bothell is proposing its Canyon Park Business Center. Kenmore is offering 53 acres of underdeveloped land on Lake Washington, called Lakepointe.

None of those sites are in Seattle proper, Amazon’s hometown, where accommodating Amazon’s planned expansion would require zoning changes that could squeeze out industrial businesses. However, the city’s government helped craft the regional proposal.

Last month Amazon shocked Seattle and Washington state officials with the announcement that it would establish a second corporate headquarters in another North American city. The surprise news left the offices of the mayor and governor scrambling to respond. But in the weeks that followed, Washington lawmakers caught their breath and got organized, pledging to come up with a coordinated, regional response to the RFP. 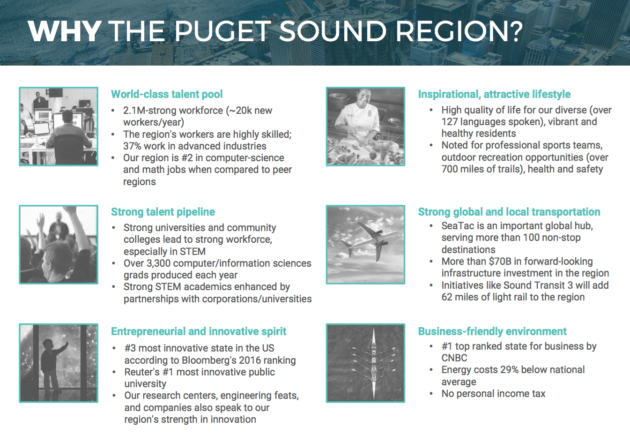 Amazon’s deadline for proposals was midnight Thursday. The King/Snohomish county pitch will be up against submissions from across the country, hoping to lure the 50,000 jobs that HQ2 will bring. It’s a heated competition and the Seattle regional bid looks like a longshot, especially considering comments from Amazon exec Jeff Wilke at the GeekWire Summit last week.

“Not everybody wants to live in the Northwest,” Wilke said. “It’s been terrific for me and my family, but I think we may find another location allows us to recruit a different collection of employees.”

Still, Amazon is continuing to grow and invest in its hometown. This week, the company confirmed plans to lease at least six floors of office space above the downtown Seattle Macy’s store. Earlier this month, Amazon announced plans to take all the 722,000 square feet of office space in the Rainier Square redevelopment project.

With that in mind, the King-Snohomish County proposal could be viewed as a reminder to Amazon of the benefits of continuing to develop HQ1. It has hundreds of slides highlighting the benefits of locating in the Pacific Northwest and includes quotes from business leaders, educators, and other members of the community.