Amazon plans to build a second headquarters in a North American city to be determined, saying the new $5 billion campus will be a “full equal” to the company’s existing operations in its longtime home of Seattle, accommodating up to 50,000 high-paying jobs.

Amazon just announced the plan for what it’s calling “HQ2” — inviting states and local governments to pitch the company on bringing the new headquarters to their community.

Related: Six cities Amazon should consider for its second headquarters

“Amazon HQ2 will be a complete headquarters for Amazon – not a satellite office,” the company says in a news release. “Amazon expects to hire new teams and executives in HQ2, and will also let existing senior leaders across the company decide whether to locate their teams in HQ1, HQ2 or both. The company expects that employees who are currently working in HQ1 can choose to continue working there, or they could have an opportunity to move if they would prefer to be located in HQ2.”

Amazon’s boom has transformed a large chunk of Seattle, with more than 8 million square feet of space across 33 buildings, primarily in the Denny Triangle and South Lake Union neighborhoods north of downtown. The company said previously that it planned to expand its footprint in Seattle to 12 million square feet by 2022. It has been continuing to lease office space at a rapid pace in Seattle.

Listen to GeekWire co-founder John Cook’s analysis of the news and where the new headquarters could go below:

Amazon declined to comment beyond its news release, but a person familiar with the company’s plans said it currently has more than 6,000 open positions in Seattle and expects to open 2 million more square feet of office space in the city, describing the second headquarters as part of its ongoing job creation. The company employs more than 380,000 people worldwide. 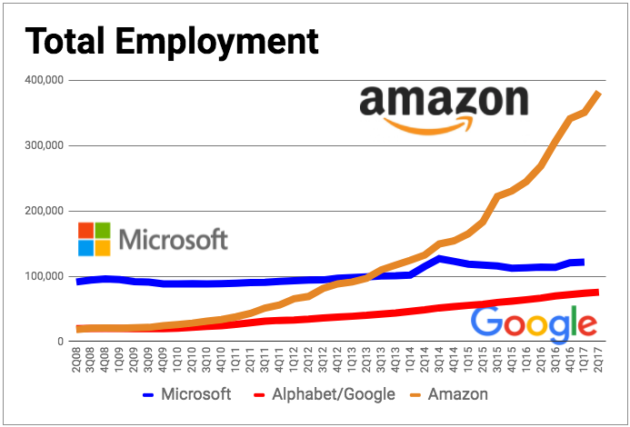 On a website detailing its plans, the company says, “We are looking for a location with strong local and regional talent—particularly in software development and related fields—as well as a stable and business-friendly environment to continue hiring and innovating on behalf of our customers.”

Amazon’s request for proposals gives a deadline of Oct. 17, with a site selection and announcement slated for 2018.

Follow up: From Philly to Tulsa, job-hungry cities line up to convince Amazon they’re the best spot for 2nd HQ

The move signals a shift in Amazon’s often complex relationship with its hometown of Seattle, where some civic leaders and citizens have grown wary of the company’s growth and its impact on the rapidly-changing city. Amazon’s expansion has been both a boon and a challenge in Seattle, fueling an economic boom and job growth but also contributing to the region’s rising housing prices and traffic problems. Jeff Bezos started the company in 1994 in nearby Bellevue, Wash., and the company has grown to more than 40,000 employees in the state currently, many of them based in Amazon’s urban campus.

Amazon didn’t provide a specific reason for deciding to establish a second headquarters, but the initiative suggests the company has outgrown Seattle. It’s an unprecedented move for a corporation of Amazon’s size to split its HQ operations, allowing managers, engineers and executives to choose where they live. That speaks to Amazon’s insatiable appetite for talent, and its need to establish a second outpost as a competitive advantage to continue growing its base of talent.

Given that Amazon plans to maintain its Seattle headquarters, the announcement isn’t as big a blow to the regional psyche as Boeing’s decision to move its headquarters to Chicago in 2001. However, it’s a sign that there’s a limit to the Seattle’s boom, for better or worse.

New headquarters will be a full equal to Amazon’s headquarters in Seattle, and is expected to grow to 50,000 employees as part of the company’s ongoing job creation

SEATTLE–(BUSINESS WIRE)–(NASDAQ: AMZN)—Amazon today announced plans to open Amazon HQ2, a second company headquarters in North America. Amazon expects to invest over $5 billion in construction and grow this second headquarters to include as many as 50,000 high-paying jobs. In addition to Amazon’s direct hiring and investment, construction and ongoing operation of Amazon HQ2 is expected to create tens of thousands of additional jobs and tens of billions of dollars in additional investment in the surrounding community. Amazon is opening the Amazon HQ2 Request for Proposal (“RFP”) now, and local and state government leaders interested in learning more about how they can bring Amazon to their community can visit www.amazon.com/amazonHQ2.

With more than 380,000 employees worldwide, Amazon ranks #1 on Fast Company’s Most Innovative Companies, #2 on Fortune’s World’s Most Admired Companies, #1 on The Harris Poll’s Corporate Reputation survey, and #2 on LinkedIn’s U.S. most desirable companies list. Amazon was also recently included in the Military Times’ Best for Vets list of companies committed to providing opportunities for military veterans.

“We expect HQ2 to be a full equal to our Seattle headquarters,” said Jeff Bezos, Amazon founder and CEO. “Amazon HQ2 will bring billions of dollars in up-front and ongoing investments, and tens of thousands of high-paying jobs. We’re excited to find a second home.”

In choosing the location for HQ2, Amazon has a preference for:

HQ2 could be, but does not have to be:

Amazon HQ2 will be a complete headquarters for Amazon – not a satellite office. Amazon expects to hire new teams and executives in HQ2, and will also let existing senior leaders across the company decide whether to locate their teams in HQ1, HQ2 or both. The company expects that employees who are currently working in HQ1 can choose to continue working there, or they could have an opportunity to move if they would prefer to be located in HQ2.

To learn more about Amazon’s current Seattle headquarters, plans for Amazon HQ2, and to submit a proposal, visit www.amazon.com/amazonHQ2.