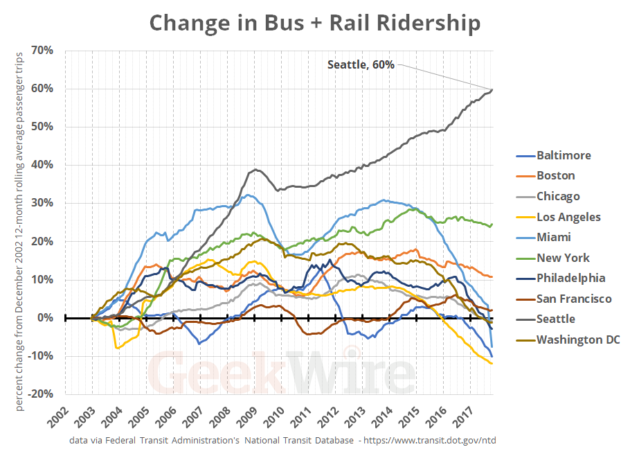 Seattle’s bus and rail system is growing faster than its counterpart in several major U.S. cities, with more light rail lines set to open in a few years.

Ridership for bus and rail has risen close to 60 percent since the end of 2002, according to monthly statistics from the Federal Transit Administration. That is more than double the next closest city tracked by FTA: New York City at 24.6 percent.

The other cities tracked are Baltimore, Boston, Chicago, Los Angeles, Miami, New York, Philadelphia, San Francisco and Washington D.C. Most of these cities have older, more established transit systems, so it’s not surprising that they would be growing at a slower rate.

Seattle, by contrast, has been expanding its transit system rapidly in recent years. The region saw the opening of its first light rail line in 2009, and a major extension north debuted in March 2016. Further northward expansions as well as a line to the east stopping near Microsoft’s Redmond, Wash. headquarters are scheduled to be completed in 2024.

Seattle traffic engineer Dongho Chang, tweeted about the numbers over the weekend. He noted that traffic volumes have actually declined, as population has risen, partially thanks to Seattle’s surging transit system.

And even more rail is on the way. Voters last year approved the third light rail package for Sound Transit, also known as “ST3” that would add 37 stations and 62 miles of light rail across Puget Sound by 2041.

The stats show that while Seattle’s transit system is growing faster than others, it lags behind some of the larger legacy systems in terms of the number of people served. In the most recent month tracked, October, a combined 15.6 million people took a variety of forms of transit including, buses, light rail, commuter trains, trolley buses and more. Boston — the metro area closest in population to Seattle among those tracked, with about 500,000 more people — moved twice as many people in October using transit.

Seattle is among the most gridlocked areas in the nation when it comes to traffic. According to a study from Kirkland, Wash.-based traffic technology and data firm INRIX earlier this year, Seattleites spent 13 percent of their driving time in traffic in 2016, amounting to 54.8 hours.

But it could be a lot worse, however, as Seattle ranked 23rd globally and 10th in the U.S. for the most jam-packed cities. L.A. topped INRIX’s list, with 104.1 hours spent in traffic.