It’s hard to imagine Seattle’s sports scene over the past two decades without the Seahawks in town, but that could have been a reality without Paul Allen.

The NFL franchise paid tribute to the Microsoft co-founder before Sunday’s home opener against San Francisco to honor his 20 years of owning the Seahawks franchise.

The team played a short video thanking Allen before he stepped on the field inside a stadium that wouldn’t exist without him. The 64-year-old got a standing ovation from the roaring crowd as he lifted his hat and saluted the fans just before the game kicked off. 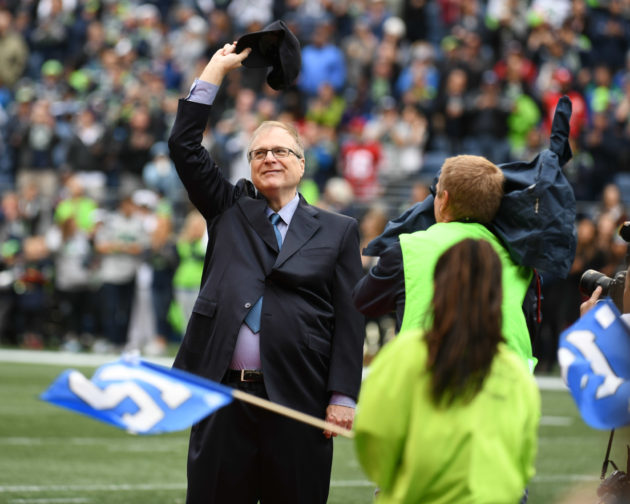 Allen, sporting a navy suit and a cap with the new Seahawks logo, didn’t make any announcements but he shouted “Go Seahawks” and “thank you” to the sellout crowd.

“Mr. Allen, on behalf of 12s everywhere, thank you,” the PA announcer said over the loudspeaker.

Paul Allen honored pregame for his 20 years as owner. Saving the #Seahawks when the moving vans were packed & leaving town #K5Sports #SFvSEA pic.twitter.com/1GTTl482qM

#ThanksPaul for everything you've done for Seattle, and the world. pic.twitter.com/howWIvSYHM 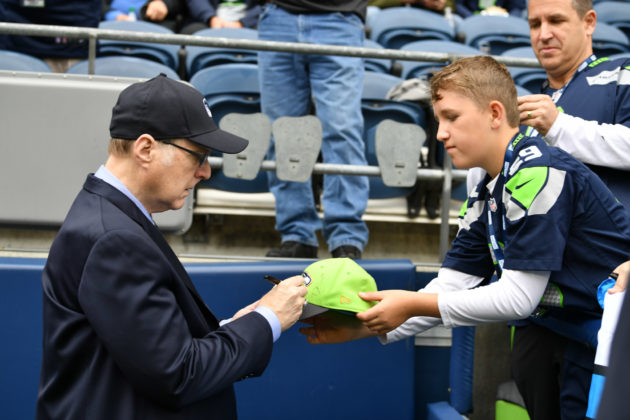 Allen even spent time with Taima, the real-life hawk that flies out of the tunnels at CenturyLink Field before each home game. 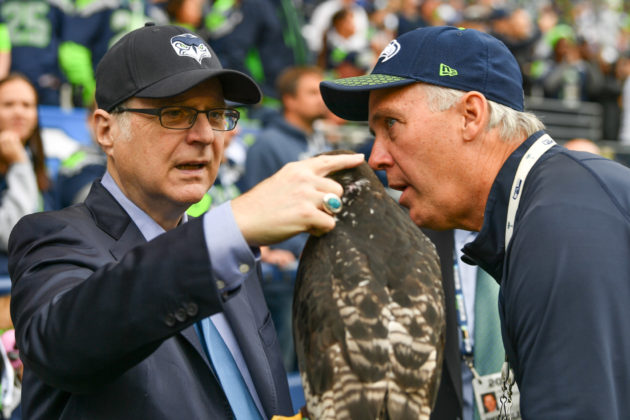 Seahawks head coach Pete Carroll called Sunday a “big celebration for the whole area for all the unbelievably supportive things Paul Allen has done for so many years around here.”

Seahawks cornerback Richard Sherman, drafted by the team in 2011, was quick with his response to our question about Allen in the postgame press conference following Seattle’s 12-9 win over the 49ers.

“I love Paul Allen,” he said. “My kids love him; my family loves him; my Mom and Dad. Paul is a great guy. He’s a really great owner of a team because he spares no expense.”

Allen, who attends most Seahawks games both home and away, bought the team for $200 million in 1996. As he writes his autobiography Idea Man, Allen purchased the Seahawks less so as a way to make money and more out of “allegiance to the city,” Q13 reported.

Allen, a Seattle native who helped launch Microsoft in 1975 with fellow Lakeside School graduate Bill Gates, wasn’t actively looking to purchase the team from disgruntled owner Ken Behring, who had temporarily moved the Seahawks to Southern California. But Allen said he’d commit to buying the franchise in 1996 if voters passed a measure to help fund the construction of CenturyLink Field.

The measure barely passed, and the rest is history.

Since Allen bought the team, the Seahawks have gone on their most successful stretch in franchise history, winning three NFC championship trophies and bringing home the Lombardi Trophy as Super Bowl champs in 2013.

Allen also owns the Portland Trail Blazers; he purchased the NBA team in 1988 and watches every home game from his courtside seat under the basket. He is also a co-owner of the Seattle Sounders, which play at CenturyLink Field.

Though he’s more involved with the day-to-day activity of the Blazers, Allen still helps make crucial and important decisions for the Seahawks both on and off the field. He also “sets the tone” for the franchise, as defensive end Michael Bennett told Q13.

“In terms of our football team, he really allows Coach Carroll, [General Manager] John Schneider, and the coaches and players to be passionate about what we’re doing,” Seahawks quarterback Russell Wilson said this week. “That’s why our culture is about winning.”

In 2015, Schneider told 710 ESPN that he compiles a report after each game for Allen. Schneider evaluates each player and notes the important aspects of a given game.

Q13 and Allen-owned Vulcan Productions put together four documentary-style segments about Allen’s ownership over the past 20 years — you can watch it below:

The Seahawks also published a four-part series on its website that details how Allen’s leadership style helped create a winning culture within the franchise and have a positive impact on Seattle itself.

Allen, who was front-and-center on Sunday’s gameday program, also bought a full-page ad in the Seattle Times thanking fans.

“The community, the 12s, the coaches, the players — when we win, we win together,” his letter reads. “It’s been a great honor to be associated with the Seahawks and every one of you 12s over the last twenty years.” 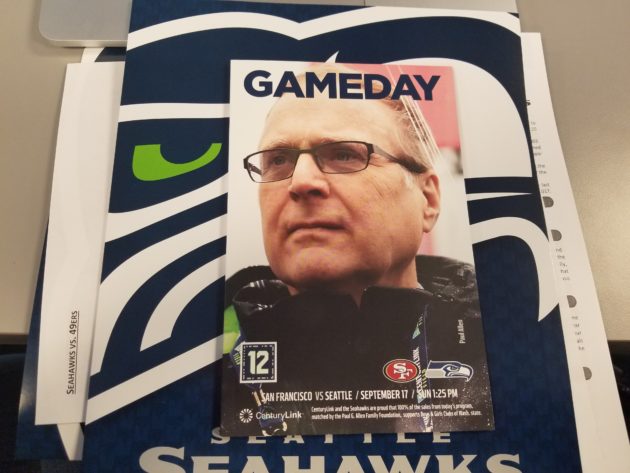 While his decision to buy the Seahawks wasn’t totally money-drive, Allen’s investment in the Seahawks is turning out to be more profitable than his ownership of Microsoft. Plus, he’s been able to enjoy a Super Bowl win — his band played at the Seahawks Super Bowl celebration party — and be involved with a team now valued at $2.2 billion. He’s frequently seen in the locker room after games.

Allen, who left Microsoft in 1982 and resigned from its board in 2000, also has an investment firm with Vulcan, is helping find lost World War II wreckage underneath the deep seas, gives millions to charity, and funds research in bioscience, brain science, cell science, and artificial intelligence.

Editor’s note: This story was updated with photos and details from the pre-game ceremony