That’s what one venture capitalist said on stage at the inaugural GeekWire Cloud Tech Summit, and it’s a reminder of why it was so exciting to welcome more than 600 folks to our first technical event ever on Wednesday in Bellevue, Wash.

It was an action-packed day that showcased the cutting-edge cloud-related trends and ideas that are transforming the technology world. You can see a recap video of the action here:

Speakers represented some of the biggest companies in cloud computing today, from Amazon to Google to Microsoft to Docker. 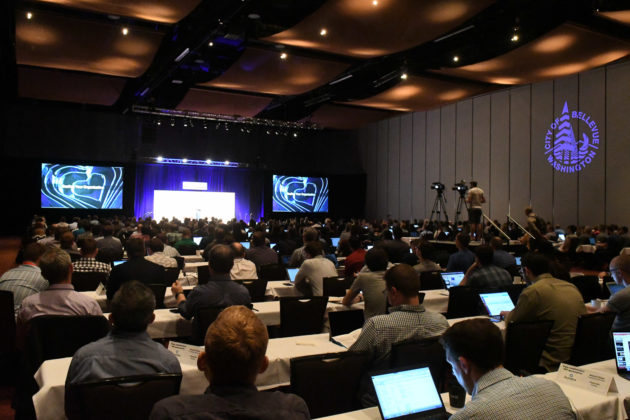 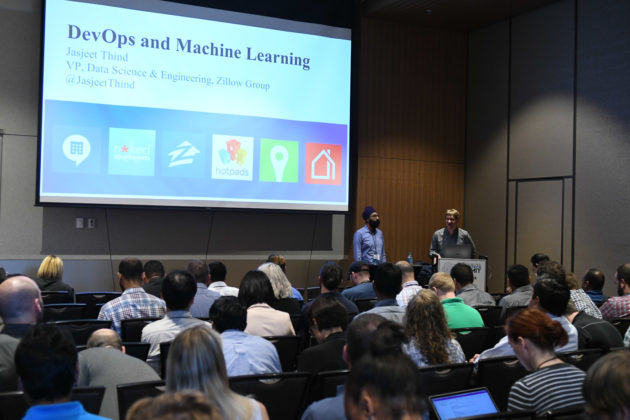 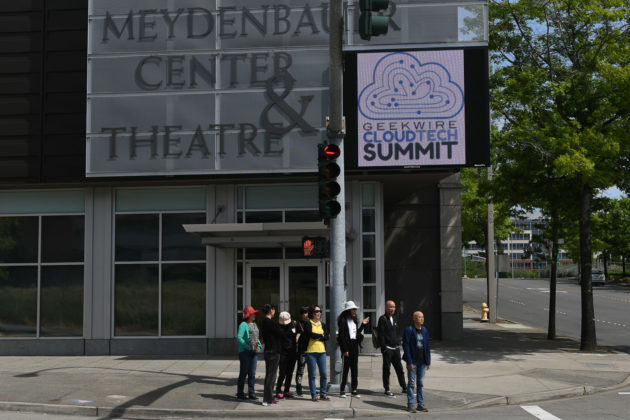 We had a great lineup of speakers and presenters — folks like Microsoft Azure chief Scott Guthrie; Docker CEO Steve Singh; Cloud Foundry Foundation Executive Director Abby Kearns; and others — who shared insight about the world of cloud computing and addressed pressing technical questions to our attendees about everything from DevOps to serverless computing.

“It is no understatement to say that public cloud computing is revolutionizing how technology is used,” wrote Fortune reporter Barb Darrow, who attended the event.

We loved hosting a world-class conference of this kind in the Seattle area, which many consider the epicenter of the cloud industry with companies like Amazon and Microsoft, in addition to countless startups that are all building cloud-related technologies.

“This is an incredible community with incredible technology talent,” said Singh, who announced that Docker is opening an office in the area, yet another Bay Area company planting its flag up north. “Obviously, it’s cloud city as well.”

Excited that the @geekwire cloudtech summit is getting started. Seattle is ground zero for cloud. #GWCloudTech pic.twitter.com/cKKWXt3cuO

"It's cool to see #Seattle becoming the cloud capitol of the world," @scottgu says about cross-pollination among area tech co. #GWCloudTech

Thanks @geekwire for a great #gwcloudtech summit! Discovered new tools, met new people, & have some ideas on to empower my team & clients!

Having a fun afternoon at #gwcloudtech, meeting the Seattle tech community, and talking about @intentionet.

The day kicked off with a fireside chat featuring Guthrie, executive vice president of Microsoft’s Cloud and Enterprise Group.

Microsoft Azure chief Scott Guthrie on competing with Amazon, and standing out in the cloud

“Microsoft is learning from Amazon.com, borrowing some of the company’s guiding principles in a competition to provide web-based technology services,” Seattle Times tech journalist Matt Day reported from the event.

Model of the new Google Seattle office now under construction. Slightly bothered by lack of “not to scale” warning. pic.twitter.com/ayq3rMeSDg

A break for lunch allowed attendees to network with each other and check out sponsor booths with cool giveaways like free airline tickets and e-readers; VIP attendees and speakers were able to connect at a special VIP meal. 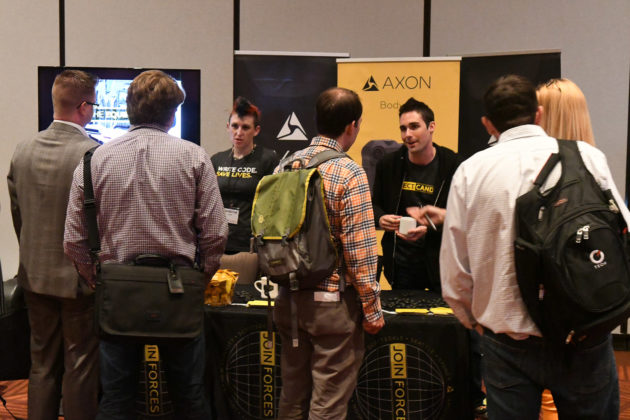 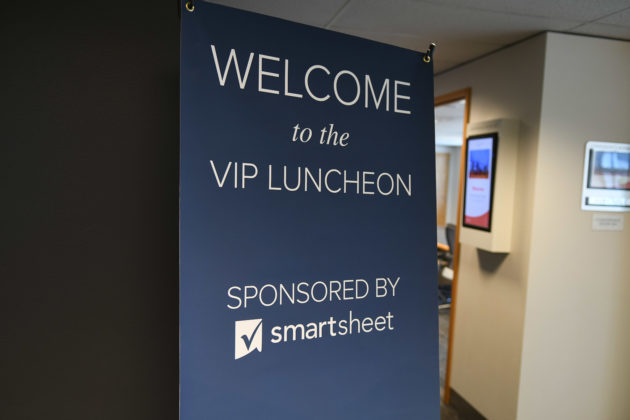 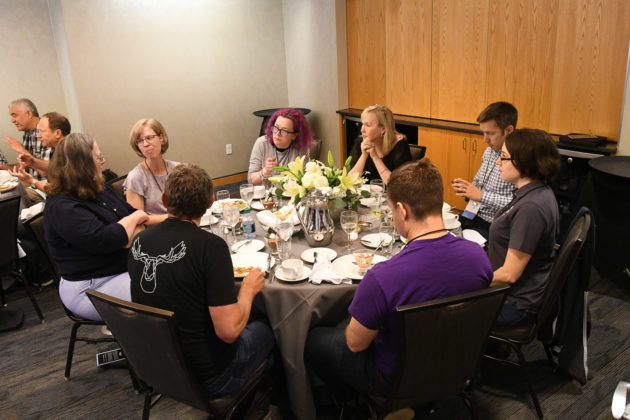 Attendees spent the afternoon soaking up knowledge at three separate technical tracks — DevOps, Microservices/Serverless and Artificial Intelligence — as well as a business track that featured a venture capital panel, a media panel and a startup showcase.

Cloudy with a chance of profit: Cloud drives value for tech giants like Amazon and Microsoft

We ended the day with a fun party at Salesforce’s new Bellevue office, which won the “Geekiest Office Space” award at our GeekWire Awards event in May.

It was also fun welcoming back Guillaume Wiatr, who sketched drawings inspired by on-stage interviews and presentations. 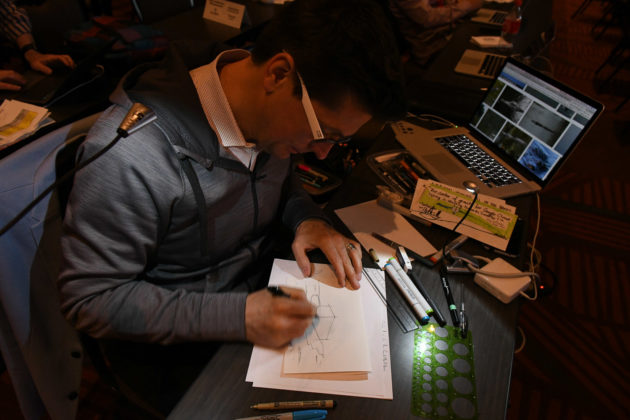 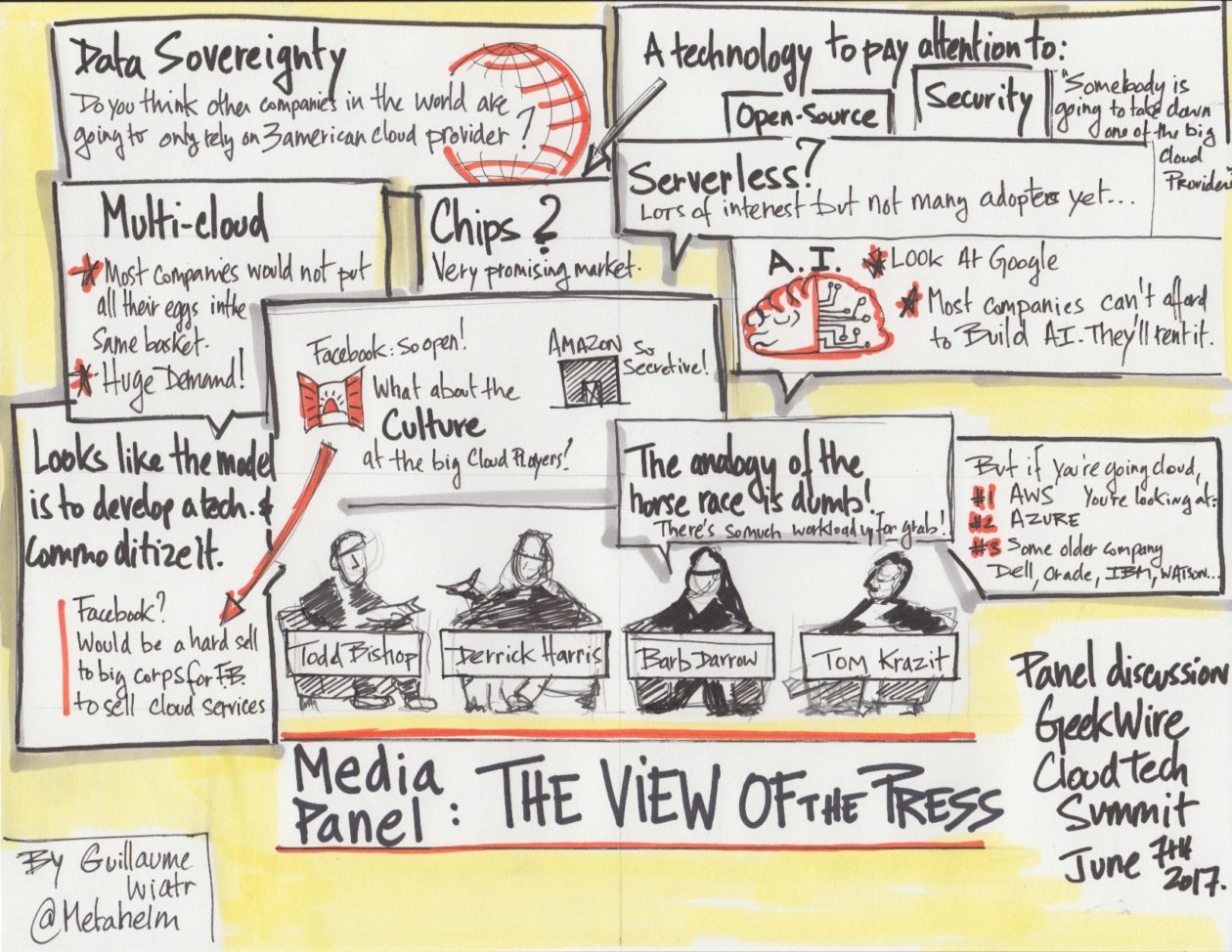 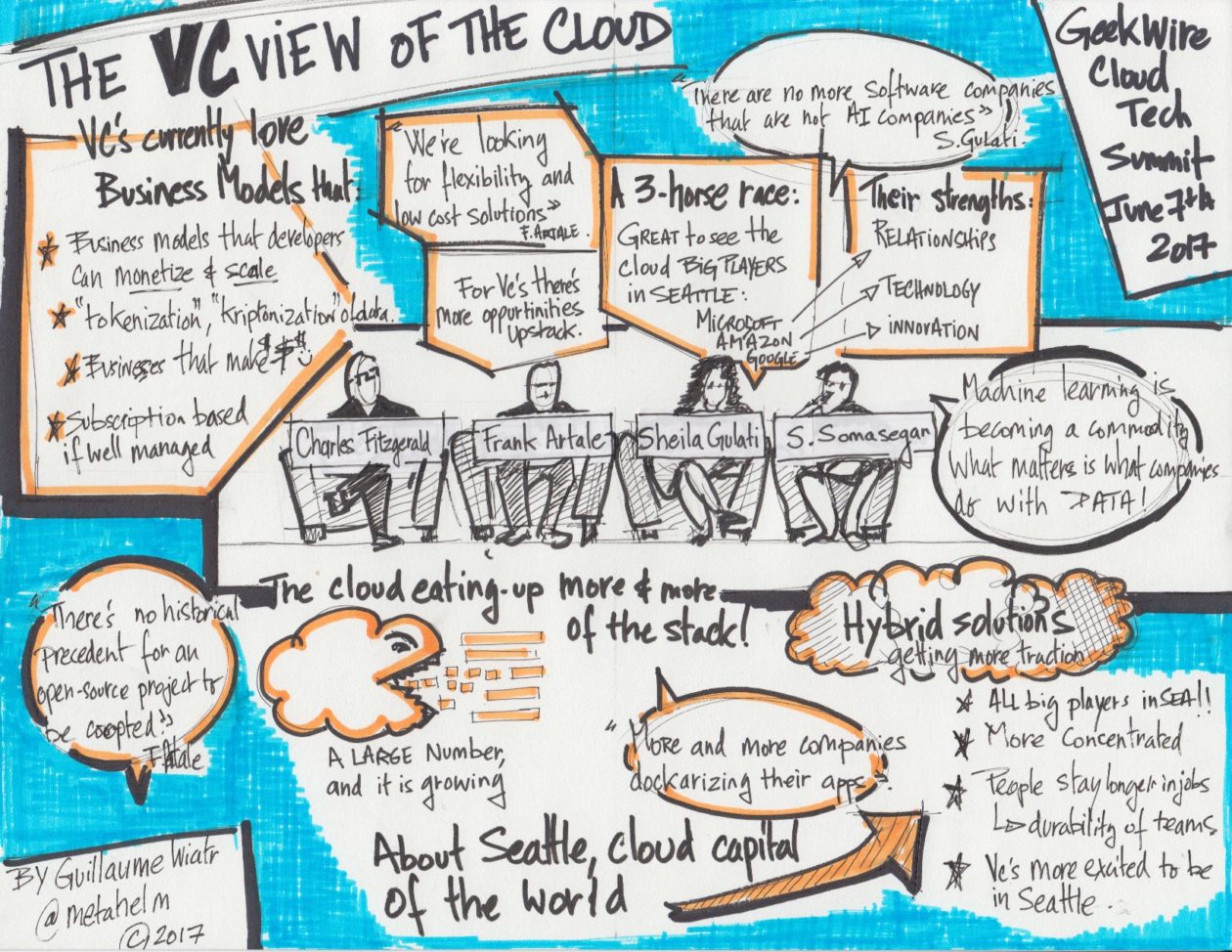 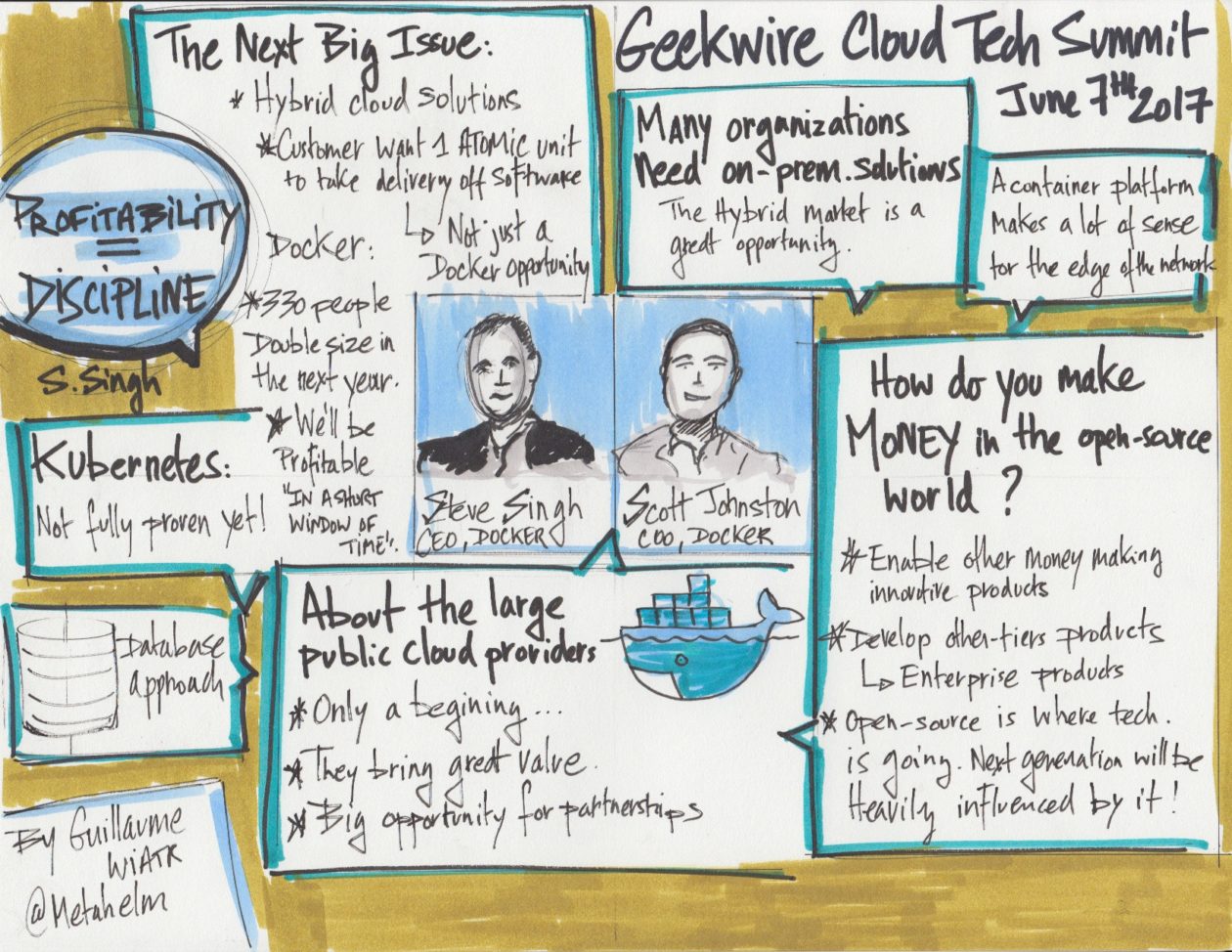 Check out photos from the photo booth here:

You can read all our coverage from the Cloud Tech Summit here. We’ll be posting videos from the on-stage discussions soon, so stay tuned for that.

Thanks to Kevin Lisota for snapping photos of the event, and to all of our attendees for being apart of it all. And of course, a big thanks to title sponsor, Salesforce, and all our other GeekWire Cloud Tech Summit sponsors for helping to make this event happen:

We’ll see you at our next event — the second annual GeekWire Sports Tech Summit later this month on June 21-22 in Seattle.