Amazon wants to make money when people use its devices, Jeff Bezos says, not when people buy them. In other words, he cares less about which Kindle you’ve got, and more about whether you buy and read books on whichever Kindle you own.

In his 2013 letter to shareholders, the Amazon CEO explained the philosophy with this anecdote: “[T]hough the research was taxing, I struggled through and am happy to report that I recently saw many Kindles in use at a Florida beach. There are five generations of Kindle, and I believe I saw every generation in use except for the first.”

This means “we don’t need our customers to be on the upgrade treadmill,” Bezos wrote. “We can be very happy to see people still using four-year-old Kindles!”

So what about 10-year-old Kindles? Believe it or not, this month marks the tenth anniversary of Amazon’s original e-reader. Yes, it has been a decade since the November 2007 release of this bulky white beast. 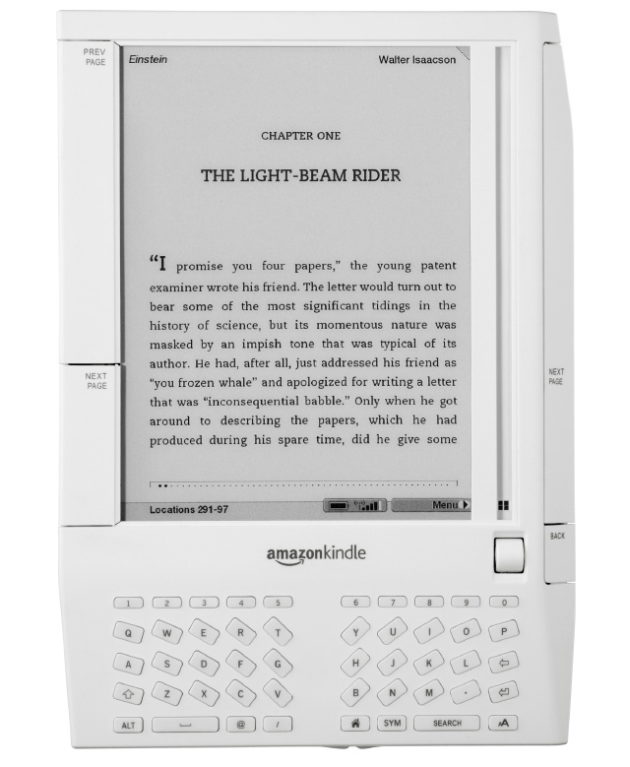 A lot has changed in the last 10 years, inside Amazon and across the tech industry. The company, which employed 17,000 people in 2007, now employs more than 540,000. The newly released, second-generation Kindle Oasis might just be the best e-reader ever made. Amazon has branched out well beyond e-readers to tablets, set-top boxes, smart speakers, smart home cameras, and who knows what’s next.

But the original Kindle is where the company started in devices. It wasn’t the first e-reader on the market, but it was historic in another way, as the first e-reader to download e-books directly to the device, over a wireless connection.

To mark the 10-year anniversary, GeekWire decided to put Bezos’ mantra to the ultimate test. Could we revive our original Kindle? And what would it be like to use if we did? Here’s what happened when we tried.

First, a note on our Kindle. I acquired this used device on eBay several years ago. I had read that line by Bezos in the 2013 shareholders letter and thought it might make a good experiment, to see what it was like to use the original Kindle. I never got around to trying it back then, but I did my best to make sure it stayed on the shelf and didn’t get taken to Goodwill or thrown out along the way.

Of course, these days, Bezos would be even less likely to spot anyone using the original Kindle e-reader on a Florida beach. But we’ve got one, in the original box, no less.

And what a box it is. Clearly designed for people transitioning from print books to e-books, the original Kindle box actually replicated a book — or, more precisely, an encyclopedia volume, with a spine measuring a whopping 3-1/2 inches wide. 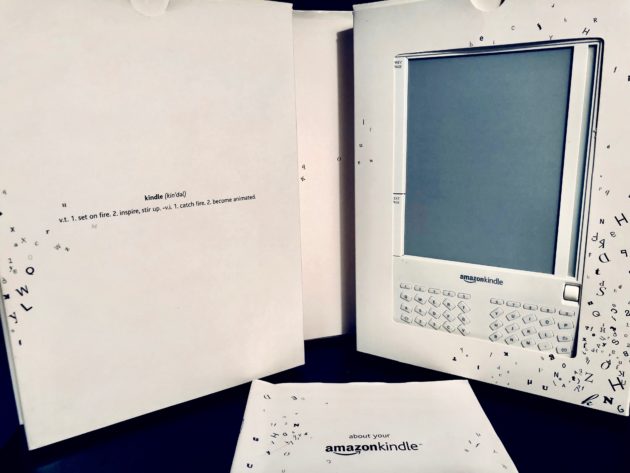 Cracking the box open reveals two compartments, one holding a power cord and USB cable, and the other displaying the Kindle.

Look at that: we’ve even got the original user manual. What could possibly go wrong? 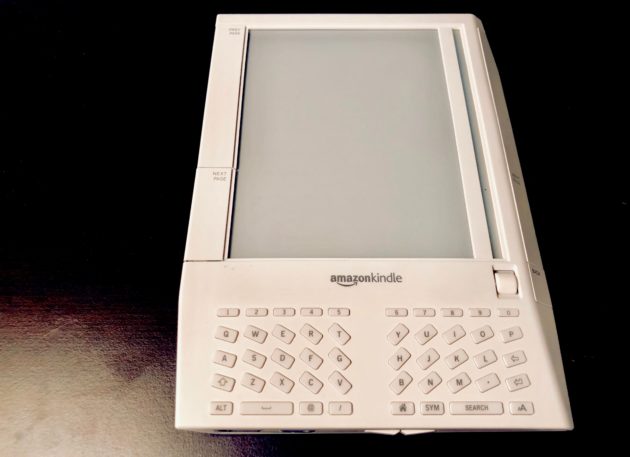 Keep in mind, this was a very hot item in its day, selling out in less than six hours, even at $399.

But looking at the original Kindle today, it’s hard to imagine this was ever a cutting-edge device. It’s misshapen on the front and back, with a big clunky button for going to the next page, a keyboard with keys at odd angles, and a scroll wheel that moves a metallic cursor up and down a narrow gutter to the right of the early E Ink display for navigating the Kindle interface. 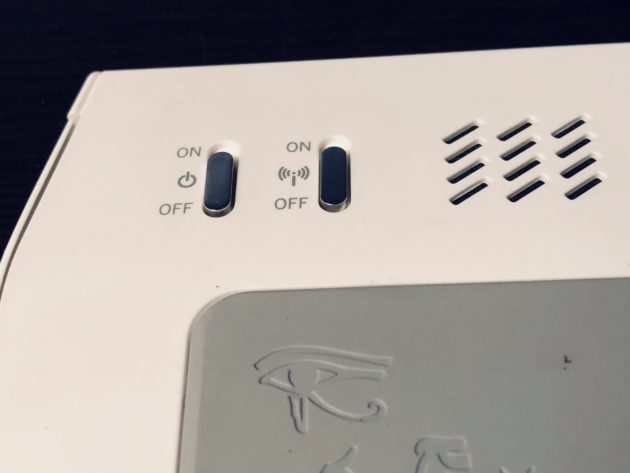 On the back is a removable rubber backing, providing access to the removable battery — what a concept! — and an SD card slot for expandable storage. Also on the back are two on-off switches: one for the device itself, and one for its wireless connection.

The original Kindle’s direct download worked via Amazon’s Whispernet wireless technology, enabled not by WiFi but by a free EVDO cellular connection. And that would be our first stumbling block in trying to bring this behemoth back to life. 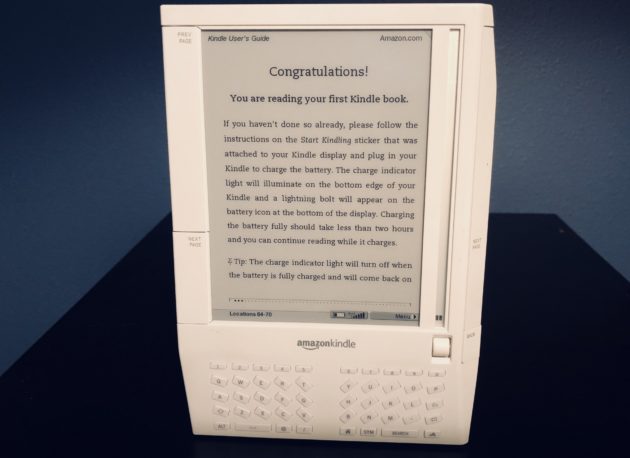 Things looked very promising at the start. When I plugged the original Kindle in and switched it on, it powered on almost immediately, taking me to the home screen, with a digital version of the original Kindle User’s Guide. I was encouraged to see full bars in the wireless antenna.

But whenever I tried to do anything that required connecting to the network — registering the device, buying books, etc. — I received an error message, saying my Kindle was unable to establish a secure connection, and telling me to call Amazon Customer Service if “this condition persists.” 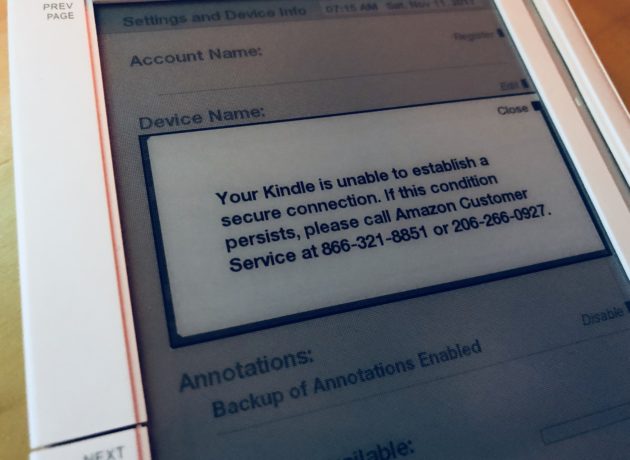 OK, will do! Amazon Customer Service, get ready to be put to the test.

I called the toll-free number listed on the screen, and was connected to an Amazon customer service agent — a cheerful guy who sounded like he might have still been in high school when this thing was released. He is no doubt much more accustomed to helping Amazon customers figure out their new Echos, Fire TVs and Cloud Cams, not their 10-year-old Kindles.

But I explained my problem, and he quickly came up with the solution. My Kindle was running an old version of the software. He directed me to an Amazon page for downloading and manually updating the Kindle software via the USB connection to the computer, I went through the update process on the device — and just like that, our original Kindle was back in business. 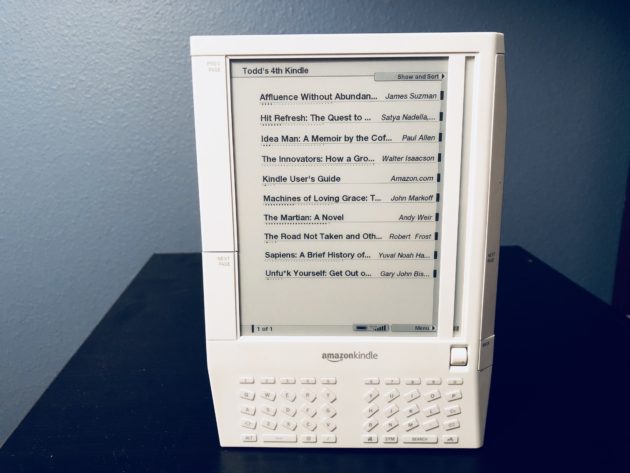 First, I was able to register the device using my Amazon account. From there, I was able to buy books via the Kindle Store on the device. I was also able to send books I’d purchased previously to the original Kindle from the web the using the Manage Content and Devices section of the Amazon website.

I’ve been using it for a couple days now, and everything works smoothly.

Still using an original Kindle? Tell us your story for possible publication in GeekWire. (Be sure to send a pic!)

Let me rephrase that. Everything works as intended. Smooth it is not. By 2017 standards, the user experience is comical. Scrolling the silver cursor up and down and pressing the scroll wheel to select something is clunky, at best.

Apart from that, it’s extremely easy to inadvertently press the “Next Page” hardware button when reading a book. The way Amazon labeled the buttons is confusing. The “Back” button under the “Next Page” button doesn’t take you to the previous page when reading a book, as you might expect, but rather jumps back to the menu. The “Prev Page” button is on the upper left side of the device. 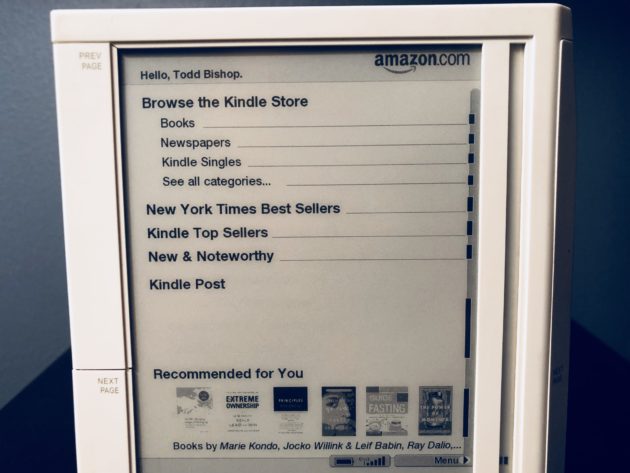 Walt Mossberg’s take is still on the mark. “I love the shopping and downloading experience,” he wrote in his Nov. 29, 2007, Wall Street Journal review. “But the Kindle device itself is just mediocre. While it has good readability, battery life and storage capacity, both its hardware design and its software user interface are marred by annoying flaws. It is bigger and clunkier to use than the Sony Reader, whose second version has just come out at $300.”

But this was Kindle 1.0, and the original experience shows just how far the company has come. Amazon is now on its ninth generation of Kindle, with sleek hardware and touch-enabled, front-lit displays making the entire experience of buying and reading books much more seamless. 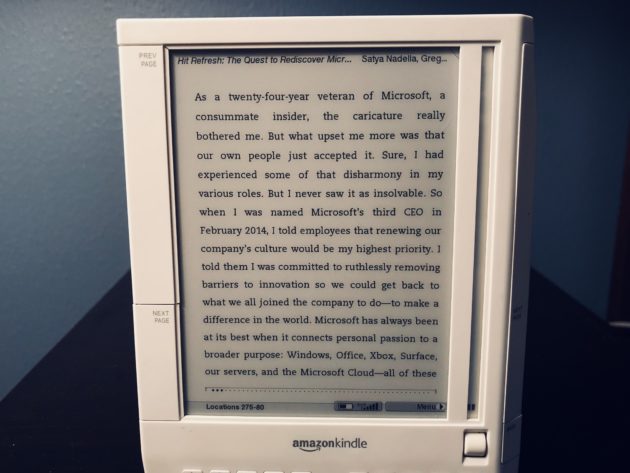 And here’s the amazing thing: This device is still perfectly usable. Sure, after 10 years, the battery only lasts a few hours. And the pages sometimes take a few seconds to turn. But I’m buying and reading books published in 2017 on something made a decade ago. It’s a pretty impressive accomplishment for Amazon. With the original Kindle, at least, the company is living up to Bezos’ mantra.

Now I just need to find a Florida beach to give this thing a proper test. 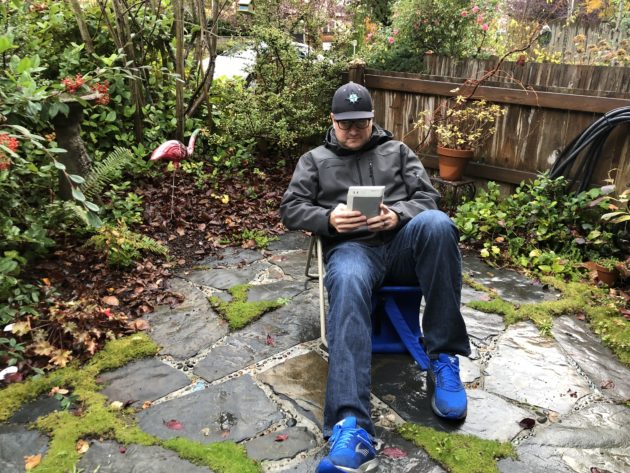