Funko, the Everett, Wash. maker of the popular Pop! figures, set the stock price for its initial public offering Wednesday at $12 per share, lower than its estimated range of $14 to $16.

Funko is expected to begin trading Thursday morning on the Nasdaq Global Select Market under the ticker symbol FNKO. Funko is selling 10,416,666 shares and offering an option for underwriters to purchase an additional 1,562,499 shares.

Funko is looking to raise $125 million from the IPO, and the underwriter options push the total up to $143.7 million. Funko appears to have downsized its IPO, as previous filings with the U.S. Securities and Exchange Commission show that Funko eyed raising up to $245 million by selling 13.3 million shares, with 2 million more in underwriter options, at $14 to $16 a piece.

Funko becomes the second Seattle-area company to go public this year, joining technology-powered real estate brokerage Redfin. Funko is not a tech company, however. It is a top seller of geeky merchandise, and its products are sold through more than 2,000 U.S. retailers. It works with traditional brick-and-mortar sellers like Walmart and Target as well as Amazon. 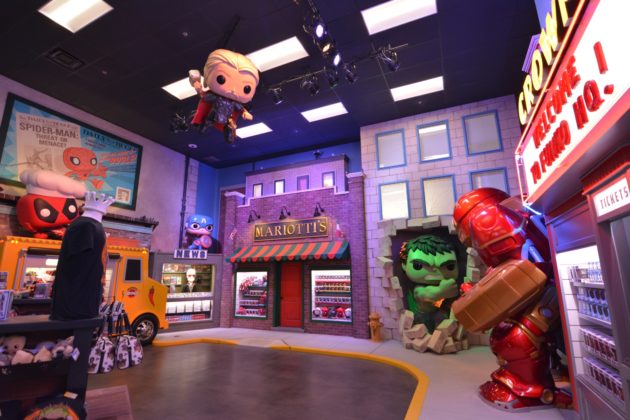 The 19-year-old Funko calls itself a “leading pop culture products company,” and its most recognizable products are the Pop! figures, which encompass everything from star athletes to iconic film and literary characters.

Funko did $426.7 million in net sales in 2016, bringing in a profit of $26.88 million, according to financial records within the IPO documentation. Though the company also revealed that it is carrying $319.1 million in debt, and it needs to continue generating cash flow to make payments. The company has said it will use some of the proceeds from the IPO to pay off debt.

The pop culture heavyweight has been growing extensively in recent years, and it just opened a brand new headquarters in its hometown of Everett. Earlier this year, it acquired London-based Underground Toys Limited, which develops and manufactures merchandise from geeky brands like Star Wars, Marvel, DC Comics, and Doctor Who.

“Our business is built on the principle that almost everyone is a fan of something and the evolution of pop culture is leading to increasing opportunities for fan loyalty,” the company wrote in its IPO documents. “We create whimsical, fun and unique products that enable fans to express their affinity for their favorite “something” — whether it is a movie, TV show, video game, musician or sports team. We infuse our distinct designs and aesthetic sensibility into one of the industry’s largest portfolios of licensed content over a wide variety of product categories, including figures, plush, accessories, apparel and homewares.”