That’s one more not-so-small step for Stratolaunch’s giant airplane: The space venture’s founder, software billionaire Paul Allen, is showing off a 34-second video of the twin-fuselage aircraft as it aced its first taxi test on the runway at the Mojave Air and Space Port in California.

Allen said the test was conducted Saturday, marking a rare outing for the plane that’s destined to serve as a flying platform for launching rockets into space. In a Sunday night tweet, he promised that there’d be “more to share soon”:

Allen, one of Microsoft’s co-founders, created Stratolaunch six years ago as a follow-up to the SpaceShipOne private spaceflight venture he backed in Mojave. The program has gone through a series of strategic twists and turns, but the fact that the plane has begun rolling down the runway suggests it could start flight tests in earnest next year.

Stratolaunch’s plane, nicknamed Roc, has the widest wingspan in the aviation world at 385 feet. That’s 50 percent wider than the wings of a Boeing 747 — which probably shouldn’t be surprising, considering that parts from two 747s went into building the plane. Mojave-based Scaled Composites aided in the fabrication of the plane’s carbon composite components.

The plane is designed to carry one or more rockets to high altitude, then drop them in midflight for launch. The benefit of air launch is that satellite payloads could be sent into any orbital inclination from a wide range of locations. Orbital ATK is one of Stratolaunch’s partners, and U.S. governmental and military officials have sent signals that they might be interested in what Stratolaunch has to offer. 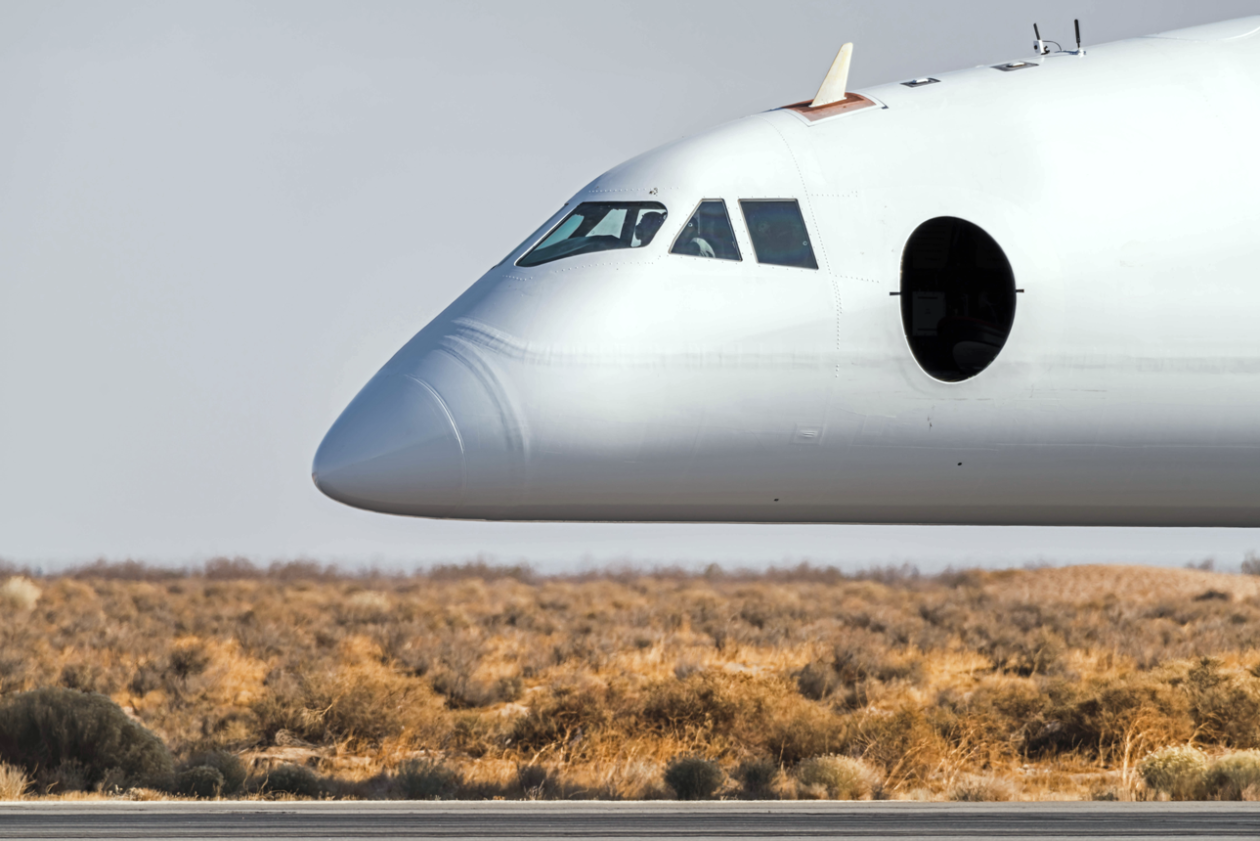 The nose of Stratolaunch’s airplane juts out during a runway taxi test. (Stratolaunch Photo) 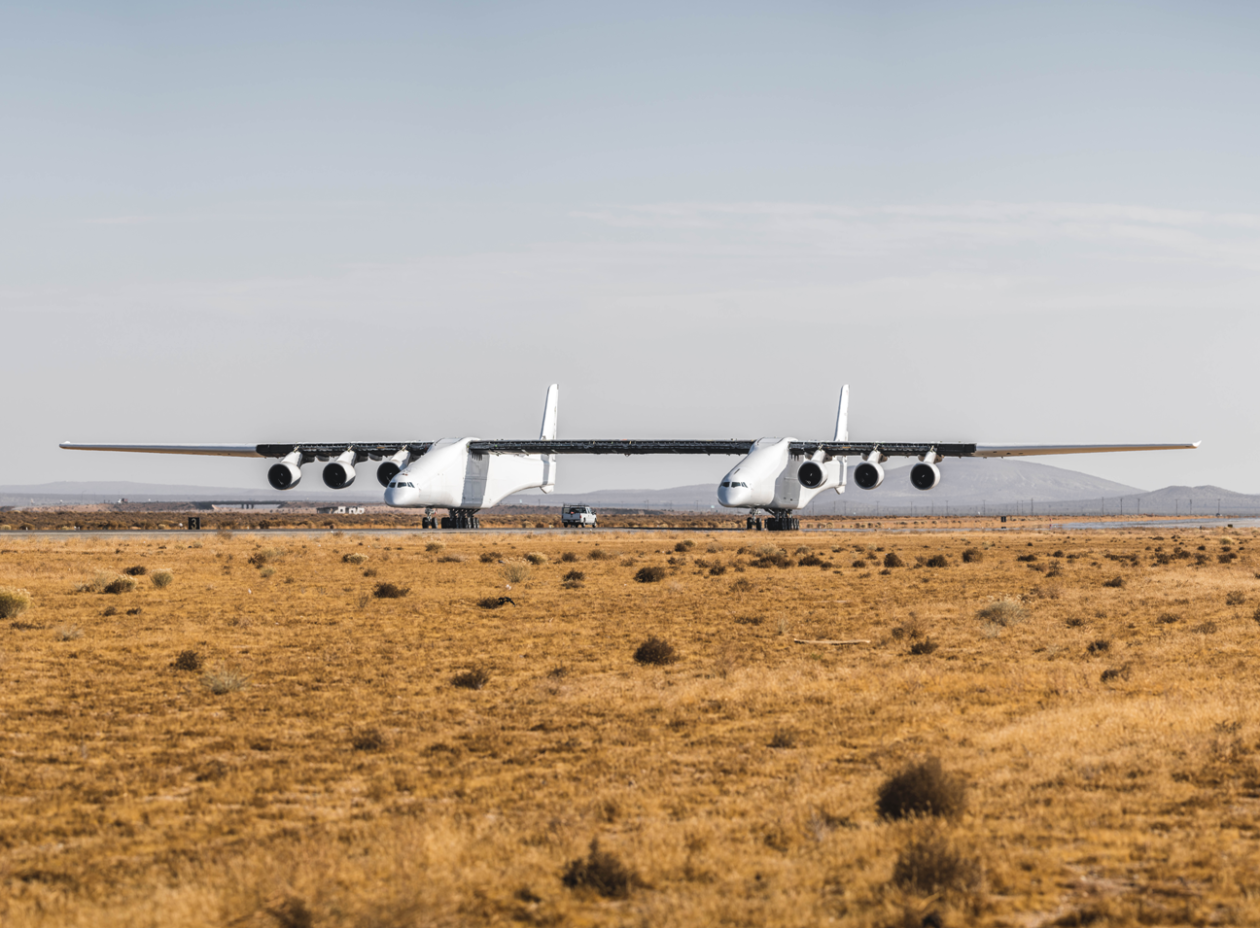 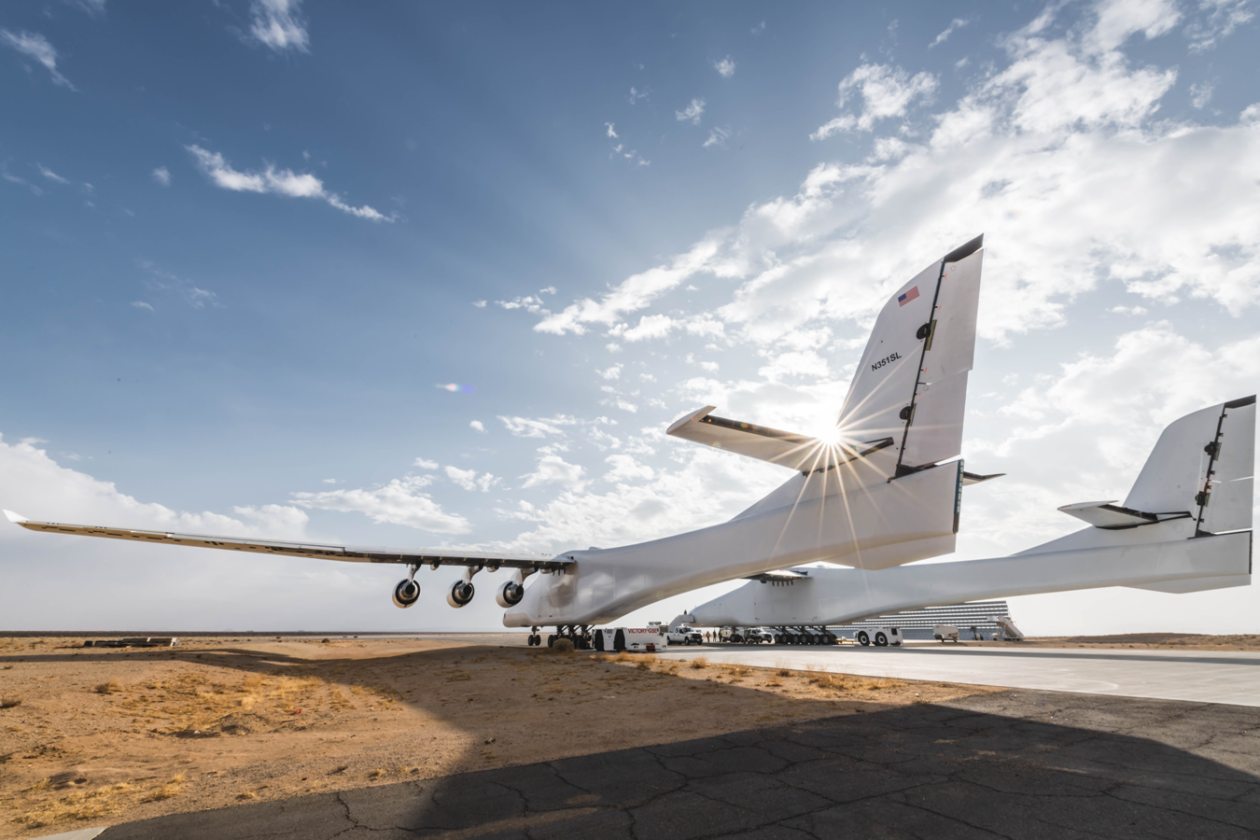 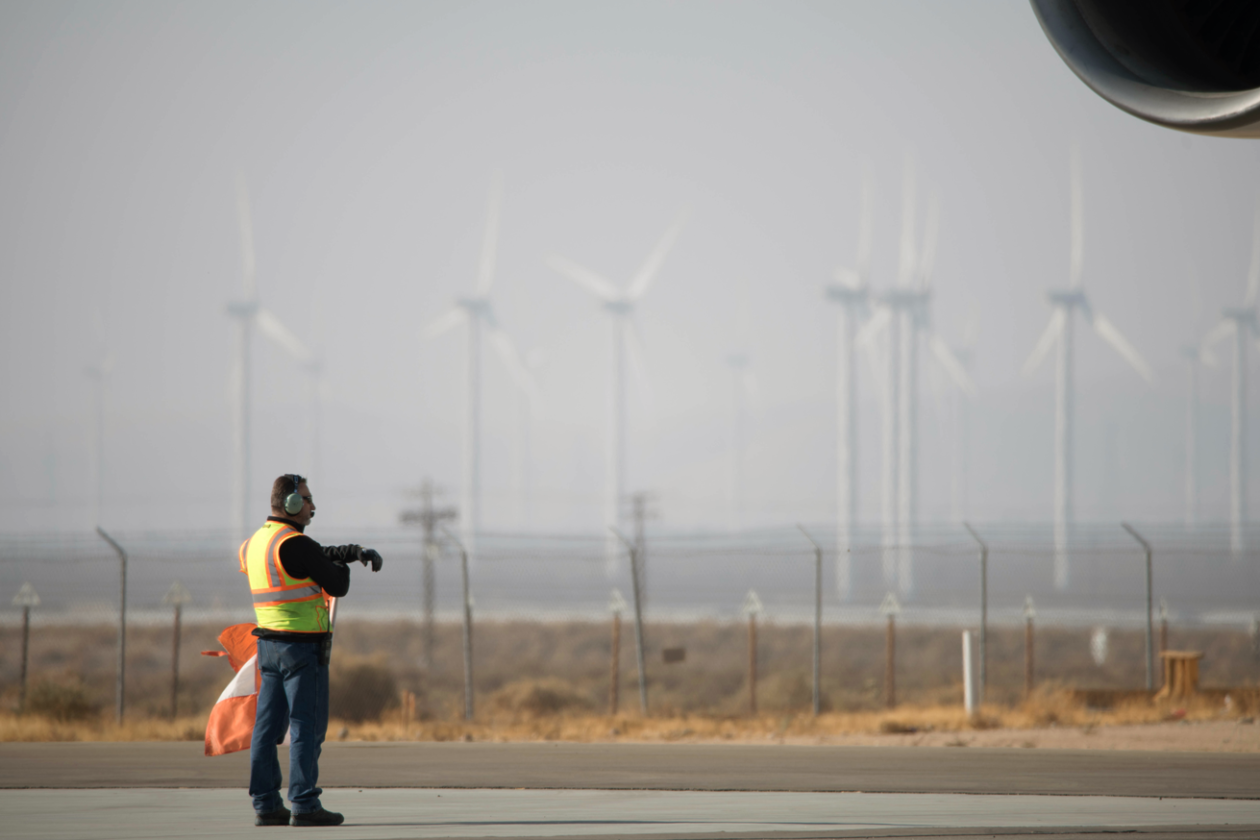 One of the plane’s engines looms high above a worker on the runway. (Stratolaunch Photo) 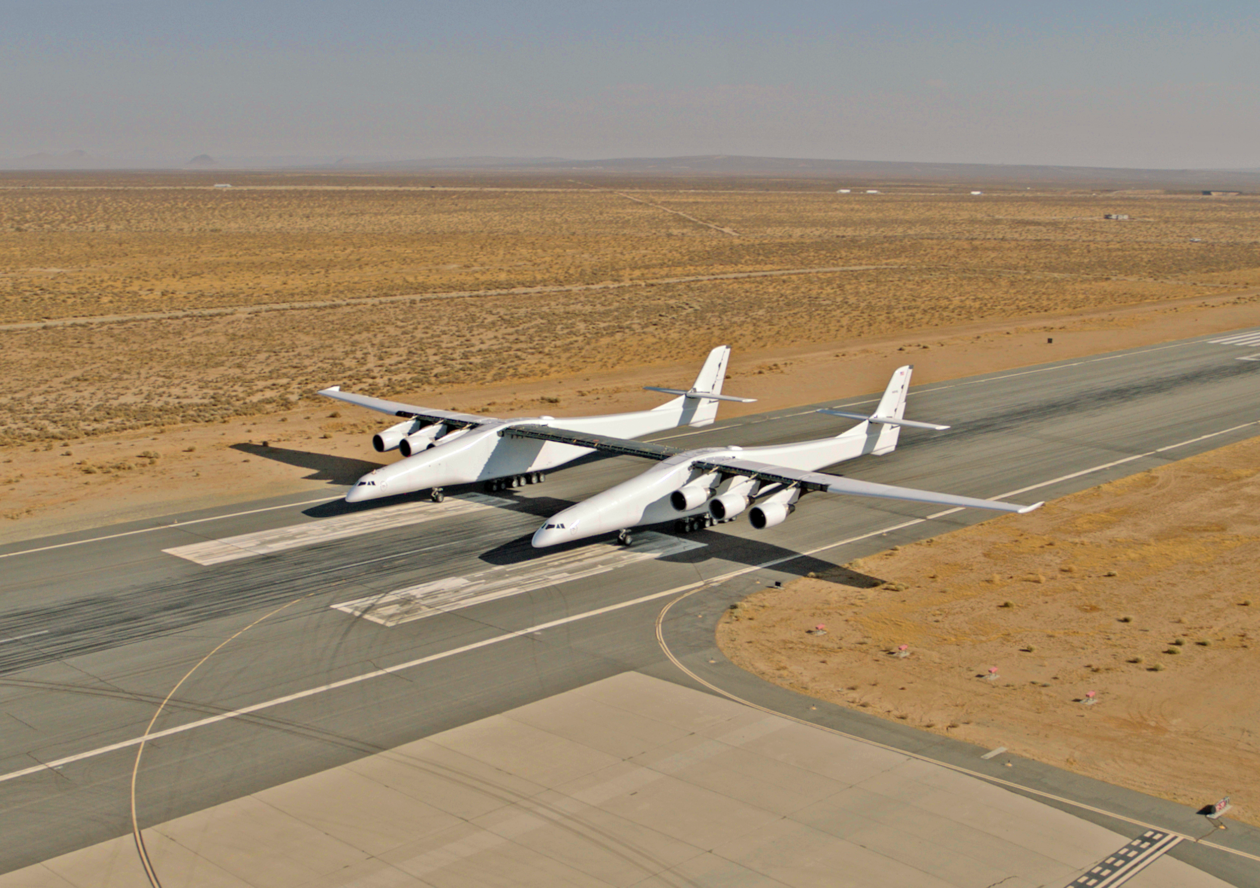 Much of the Stratolaunch plane consists of carbon composite,but it also incorporates parts from two Boeing 747s. (Stratolaunch Photo) 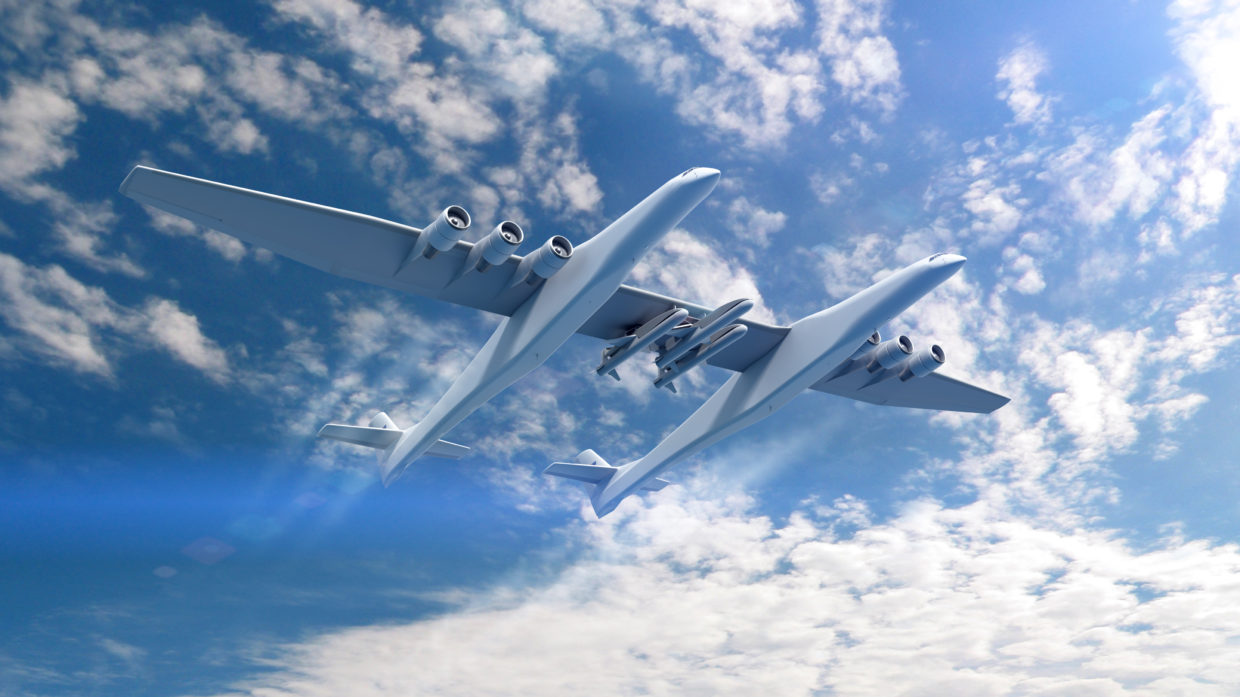 In a statement released today, Stratolaunch CEO Jean Floyd said “the primary purpose of this activity was to test the aircraft’s ability to steer and stop.”

“Our ground team monitored a number of systems, including steering, braking, anti-skid and telemetry. We are excited to report these systems operated as anticipated,” Floyd said.

“This was another exciting milestone for our team and the program. Our crew was able to demonstrate ground directional control with nose gear steering, and our brake systems were exercised successfully on the runway. Our first low speed taxi test is a very important step toward first flight. We are all proud and excited.”

As taxi tests continue, the airplane will go down the runway at increase speeds, leading up to the day when it takes off for the first time. If all goes according to plan, Stratolaunch could start launching by as early as 2019.