As he began speaking at the news conference for Paul Allen’s Stratolaunch space project today, renowned aerospace engineer Burt Rutan pointed out a “large mistake” in a video simulation and model of the aircraft that the venture will use to launch rockets into space from 30,000 feet in the air.

“You should never show this airplane or a model of it without, right next to it, an airplane that we know how big it is, like a little 747,” Rutan said — making the point that the Stratolaunch plane, with a wingspan wider than the length of a football field, will dwarf the giant of Boeing’s fleet. 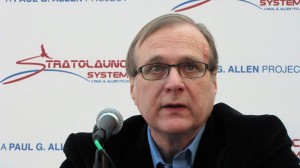 That’s just one measure of the bet that Allen is making on the project. In addition to following through on his childhood dreams about space, Allen will be attempting to improve an investment track record that has been decidedly mixed since he left Microsoft.

Answering questions at the news conference, the billionaire declined to say how much he’s spending on the Stratolaunch project, but indicated that he’s the sole financier, with the other companies involved in the project serving as subcontractors.

“Obviously this is not inexpensive,” Allen said, adding that it will the investment will total “at least an order of magnitude” more than he put into SpaceShipOne project. The total cost of that project was $28 million, Allen revealed in his recent memoir.

During the Stratolaunch news conference, a reporter told Allen about the old saying that the quickest way to become a millionaire in the airline business is to start off as a billionaire. Allen joked that the same could be said of yachts, another of his passions.

“This is obviously a big initial investment that we wouldn’t be making if we didn’t think there were going to be a lot of customers out there, both for cargo and for manned missions in the future,” he said. “It is a big initial fixed investment to get this going. But you have a certain number of dreams in your life that you want to fulfill, and this is a dream that I’m very excited about seeing come to fruition.”

One advantage, Allen said, is that Stratolaunch is taking advantage of established systems such as 747 engines, six of which will be used in the launch vehicle.

But there will also be plenty of competition to ferry passengers and cargo into space, as companies rush to fill the void left by the discontinuation of the U.S. Space Shuttle program.

Stratolaunch is aiming for a first flight within five years, starting with cargo missions.

One thing is clear: Allen won’t be the first passenger when the manned spaceflights start.

“I think I’m going to wait for a large number of those flights to happen before I’ll be on one,” he said. “I’m actually a fairly conservative guy in some aspects.”

Here’s the video depicting the Stratolaunch vision (without a 747 for comparison, for now).