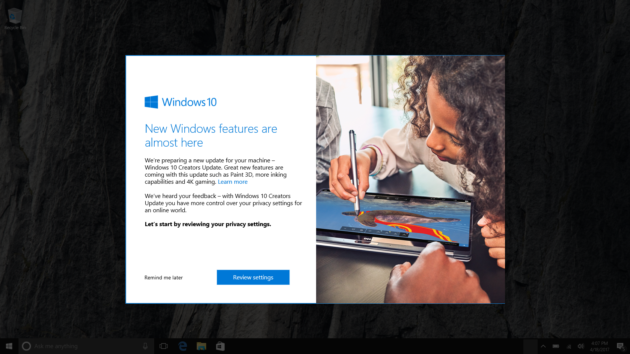 As Microsoft unveils the release date and final features of the Windows 10 Creators Update, the company is also offering a peek behind-the-scenes at the process of developing the latest version of its operating system.

One key element was feedback from customers participating in the Windows Insider Program, which encompasses more than 10 million members. According to Dona Sarkar, the software engineer who runs the program in Microsoft’s Windows and Devices Group, Windows Insider participants played a huge role in the development of this latest Windows update.

“When we, as Microsoft, are building a product for billions of people out there — billions of Windows users — and millions of Windows 10 users, we need to co-create this product with people who are representative of our overall audience,” Sarkar says of the program. “The Windows Insiders are the millions who represent the billions.”

Sarkar said the impact of Windows on the lives of customers, and the importance of their feedback, was brought home to her last year after a meeting in Toronto with a Windows Insider participant named Jason, who is blind.

She said that Jason uses the Cortana speech recognition and voice assistant technology on his Windows phone to help him with practical issues like ordering a car from Uber to pick him up when he needs to go somewhere.

“He relies on technology for his life,” said Sarkar. “Without Cortana and Uber, Jason would be stranded at the restaurant where we had just finished having dinner. So what became super obvious to me at that moment was that Jason’s feedback on Cortana was so much more relevant than my feedback, for that particular use case. If Cortana doesn’t work for me, I can just take care of it at the keyboard — but if it doesn’t work for Jason, he can’t get home.”

One of the big new additions in the Windows 10 Creators Update is the inclusion of a book reading experience in the Microsoft Edge browser, and the addition of digital books as an offering to the Microsoft Store. Sarkar said that feature actually grew directly from feedback from Windows Insiders.

“We got feedback galore from Insiders saying ‘you know what, I love to read on my Windows tablet or my Windows Surface device and I would love to be able to actually read books in Edge,’ ” she explained. “We said ‘huh, this is interesting, Windows Insiders really, really want this.’ And the entire Edge book reading experience — including reading out loud — was all based on feedback from Insiders.”

Sarkar said one of the keys has been “community champions” within Microsoft who work closely with participants in the Windows Insider program. “These community champions are engineers within the Windows team — so they are not off in some other organization in support or sales or anything like that,” she explained. “They are people who check-in code to the build all the time.”

“One thing to note is that the Surface team is treated as equal as we do any of our third party hardware partners – such as Dell or HP,” she said. “We’ve had these relationships with them for what, 30 years, and they’re really good friends. That is how we have shipped Windows for as long as I have been alive. And with the Surface team we have pretty much the exact same relationship. We have equal numbers of Dell and HP and Asus and Acer machines inside the company as we do Surface devices, because we realize that it’s important to be representative of all the global audience.”

Another important factor is making sure Windows 10 can run smoothly on a broad variety of systems, including older machines.

“Of course, there are Windows Insiders who have Surface devices, but also many, many, many Windows Insiders who also have Dells and HP and Acers,” she said. “I actually run a WIP (Windows Insider Preview) build on a Dell machine from 2006. It’s this ginormous pink Dell machine that weighs like 8 pounds. People laugh and me and are like ‘Dona, why do you have that?’ and I tell them ‘Because many of our customers do.’ I need to be able to make sure that my version of this operating system continues to work after several upgrades.”