Microsoft is launching a new subscription program for buying Surface computers and tablets in much the same way that many people now purchase smartphones, with no-interest financing for two years and the ability to upgrade to a new device before the term is up.

Announced this morning at the launch of back-to-school season, the initiative is part of a broader push by Microsoft to gain new momentum in U.S. schools, where Google Chromebooks have taken the lead vs. Microsoft and Apple.

Microsoft’s new subscription program, called Surface Plus, will be available starting later today through the Microsoft Store in person and online. Microsoft’s Surface Laptop, Surface Pro, Surface Book and Surface Studio are all options under the program. The program lets participants upgrade to a new machine after 18 months when they return their existing hardware in good condition. 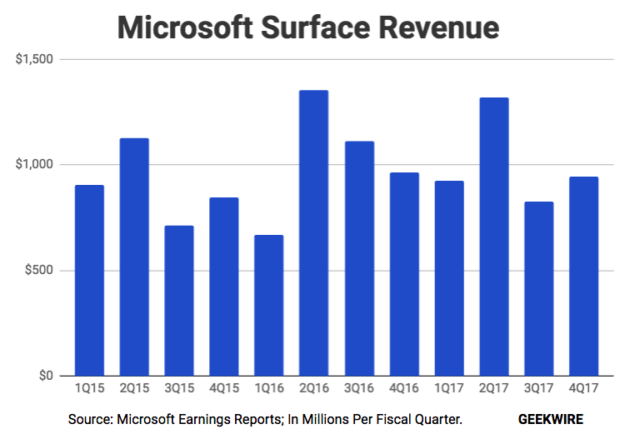 The push to boost Surface adoption comes amid declining sales of Microsoft hardware for the past three quarters. Microsoft Surface revenue fell 2 percent in the latest quarter to $945 million, because of lower volumes sold, according to the company. The Surface Laptop launched two weeks before the quarter ended, minimizing the impact on the company’s quarterly results.

In addition to its own hardware, Microsoft announced several new third-party machines that will be available in the coming months pre-installed with Windows 10 S, the new, streamlined version of Windows for education. Microsoft said schools can begin to order Windows 10 S devices today.

The company also announced a new online series for educators, called Back to School Live, focusing on several Microsoft programs for schools.