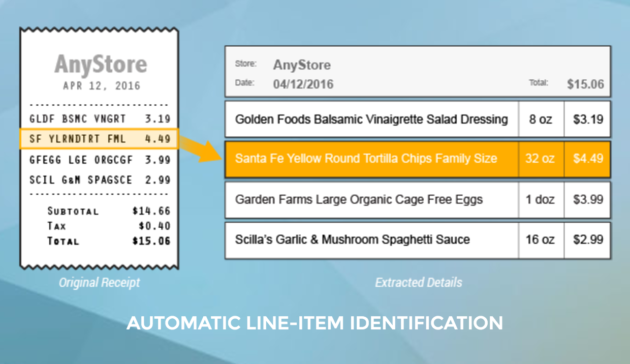 MetaBrite is raising more cash to bolster its receipt-scanning and business intelligence technology.

The Seattle startup just reeled in an additional $3 million from existing investors and Acorn Ventures. Total funding to date is now $16 million.

Docusign co-founder Court Lorenzini heads up MetaBrite as CEO. He originally raised nearly $5 million for CookBrite, which was the name of his company that built a one-stop mobile meal-planning solution, acting as a digital shopping list and recipe book.

But in November 2015, the startup changed its name to MetaBrite, expanding its focus toward a business intelligence platform.

Now the company is committing 100-percent to the new platform and will shut down the existing CookBrite app later this month.

MetaBrite has developed machine learning technology that can scan receipts and automatically extract precise item-level details from any retailer. It licenses its receipt processing SDK into multiple consumer-facing apps.

“Our application partners cover a wide variety of consumer use cases including brand loyalty and reward programs, lifestyle apps, and mobile consumer research to name a few,” Lorenzini told GeekWire.

There are now 30 people working for MetaBrite, up from 18 this time last year. Sam Lucente, who co-founded the company with Lorenzini, is no longer part of the executive team but still sits on the board. The startup also recently hired two new execs: Former Amazon manager Leigh Allen-Arredondo as director of design, and former Blackberry exec Mark Meuleman as vice president of business development.

Other MetaBrite executives include Roy Penn, a former engineer with the Israeli Defense Forces; and Christine McKee, a former RealNetworks and Expedia executive. Other employees have experience at places like Kraft, McDonalds, IBM, and Nielsen.