Buckle up, because a new report from Madrona Venture Group predicts we’re speeding toward a self-driving future faster than you might think.

The report from the Seattle-based venture capital firm foresees Interstate 5 between Seattle and Vancouver, B.C., becoming entirely dedicated to autonomous vehicles (AVs) by 2040. The report, by Madrona managing director Tom Alberg; senior associate Daniel Li; and Craig Mundie, former Microsoft chief research and strategy officer, is an update to a study Madrona released a year ago — and it is even more bullish on the future of AVs.

In the new report, the group says this transformation will occur in three stages. First, AVs will be allowed to share HOV lanes. The study’s authors say that this phase could be implemented today and note that California law already allows self-driving cars to use carpool lanes. Step two would involve creating a lane dedicated to AVs. Step three: converting all I-5 lanes to be used exclusively by self-driving cars.

To get out ahead of this transportation revolution, the study’s authors are calling for the creation of a Cascadia Innovation Corridor I-5 Taskforce. The group would comprise “key transportation decision makers and planners, as well as representatives of businesses involved in autonomous vehicle innovation from both sides of the border” tasked with developing a plan for AV deployment.

This should be a priority, Madrona says, because of the advantages AVs will bring to the region. The report’s authors cite reduced traffic accidents and carbon emissions, increased productivity during commutes, and a more connected innovation corridor between Seattle and Vancouver. 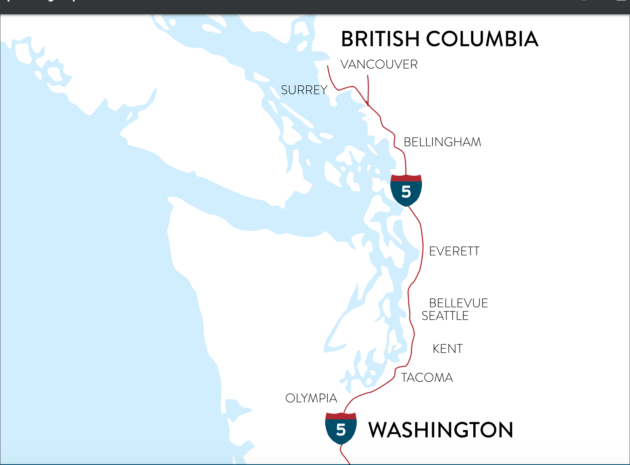 In March, local tech, transportation, and development companies created the ACES Northwest Network to ensure cars that are “automated, connected, electric and shared” are introduced into the Seattle region’s transportation system. Members include INRIX, Nvidia, Uber, Lyft, Amazon, Puget Sound Energy, and others.

The group behind the Madrona study are calling on additional stakeholders, like Challenge Seattle and the University of Washington’s Co-Motion Mobility Innovation Center, to help build a framework that prepares the region for self-driving cars.

“By working together, our region will be well-positioned to take advantage of the upcoming changes to technology and transportation and secure its place as a worldwide leader in innovation where government and private enterprises work in partnership to solve major problems,” Madrona says. “Taking on this ambitious project would set Seattle and Vancouver on the path to becoming the standard for major cities and corridors in North America and elsewhere.”