The congested and time-consuming Interstate-5 route between Seattle and Vancouver, B.C., provided the inspiration for an ambitious new report from Madrona Venture Group that aims to take on the region’s transportation headache with autonomous vehicles.

The Madrona report, released Monday and authored by Tom Alberg, Craig Mundie, Daniel Li and Connor Raikes, calls for the introduction of self-driving cars on the 142 miles known as the Cascadia Corridor. The group says implementing an innovative plan over a 10- to 15-year period would serve as proof to the world of “the region’s status as a leading global center of innovation where governments and private enterprises can work in partnership to solve human problems.”

The initial idea would be to allow autonomous vehicles to share I-5’s HOV lanes and over time those lanes would become exclusive to driverless vehicles. Eventually, non-autonomous vehicles would be excluded from I-5 altogether, except for certain times when the highway is not congested — most weekends and 8 p.m. to 4 a.m. on weekdays, the report says.

Madrona calls the time spent in a car driving from one city to the other a waste and says riders who didn’t have to focus on the road could regain at least 2 1/2 hours and spend it preparing for a business meeting, watching a video or sporting event, working on a novel, etc. The usual points supporting driverless vehicles are also cited, including: reduction in accidents and deaths, less environmental impact, reduction of the need for more freeways and lanes, and lower transportation costs for consumers.

And because the drive south from Seattle to Tacoma to Portland suffers the same congestion issues, Madrona says the plan could be extended to that corridor.

The report goes on to explain the relationship between Seattle — a leading tech hub — and Vancouver — a new and growing tech hub — and how the Canadian city has attracted giant influencers such as Microsoft and Amazon to open offices there.

Seattle’s and Vancouver’s tech and startup companies would benefit greatly from greater ease of intercity transportation. The connectivity of the digital era has not diminished but seemingly has rejuvenated the value of physical location and meeting in person. Improved transportation from Seattle to Vancouver is not merely about leisure and travel; it’s about making sure Seattle and Vancouver maintain and improve their competitive edge in the modern economy. 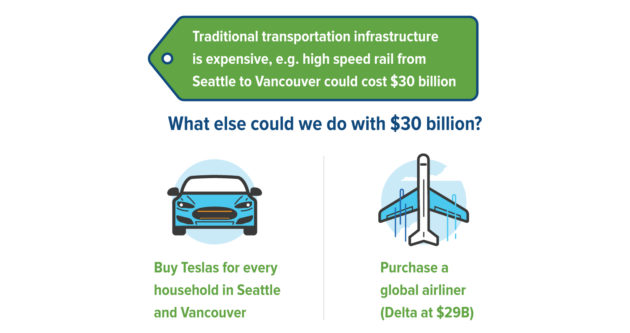 While the authors recognize that proposal could be “highly controversial” because of the public’s “natural concern about the likelihood and timing of autonomous vehicles,” Madrona takes on alternative options such as high-speed rail, saying the the estimated cost is $250 million a mile. That figure nets out to $30 billion for the Seattle to Vancouver corridor, and Madrona says for that cost, every household in Seattle and Vancouver could be given a self-driving Tesla.

Madrona calls on local, state and federal governments to grasp the need for autonomous vehicles and invest accordingly, alongside major transportation and technology companies such as GM, Uber and others. In Pittsburgh last week, Uber started real-world testing of autonomous Fords on the city streets.

The report is expected to be a topic of conversation at the Cascadia Conference, which is taking place in Vancouver on Tuesday. The invite only conference organized by Microsoft aims to bring business, government and academia together to talk about the region.