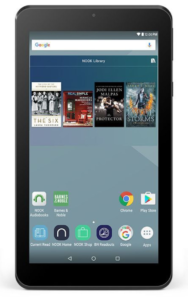 It’s going to take quite the plot twist to save the fate of Barnes & Noble’s Nook e-reader, judging by another year of sharp declines in revenue from the would-be Kindle challenger.

Barnes & Noble reported earnings for its 2017 fiscal year Thursday morning, and they were not good. Nook revenue fell 23 percent during the fiscal year, from $191 million to $146 million, although operating income for the division improved following steep cuts to the “selling and administrative expenses” section of the income statement for Nook.

Amazon barely even mentioned its Kindle e-reader during its last earnings release, but it’s pretty clear who has won the hearts of consumers looking for a dedicated digital reader. Even though Amazon does not provide sales figures for the Kindle, Morgan Stanley estimated the company had sold $5 billion worth of the device back in 2014, and that number has only grown.

Nook once recorded $450 million in revenue during just the holiday shopping season of 2011, which gives you a sense of just how far it has fallen. The latest version of the device, the Nook Tablet 7, was introduced last November for just $49 and doesn’t seem to have stopped the decline in sales of the device. A serious hardware flaw obviously didn’t help.

The picture is a little better for Barnes & Noble as a whole, but Amazon has clearly taken a toll on a company that was once a giant in its market. Sales fell 6.5 percent to $3.9 billion, cash and cash equivalents fell to $12 million, and when this is the quote chosen for your earnings press release — “While fiscal 2017 proved to be a challenging year for the company, we reduced costs by $137 million, enabling us to sustain our profitability level,” said CEO Demos Parneros — you know you’re looking at a company struggling to stay afloat.