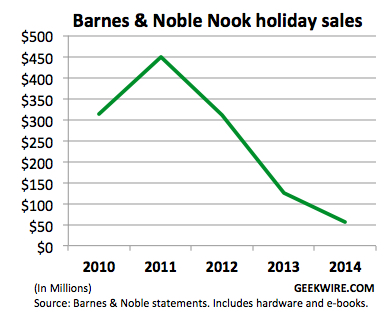 Barnes & Noble this morning reported its 2014 holiday sales numbers, including a decline of more than 55 percent in its Nook e-reader business, spanning digital content, devices and accessories. The overall Nook sales of $56 million represent a new low point for the nine-week holiday period for the bookseller’s e-reader business.

As a component of that number, hardware and accessory sales were down 67.9 percent, to $28.5 million.

The 2014 holiday season included the launch of a new Galaxy Tab 4 Nook tablet, co-branded with Samsung, but that doesn’t appear to have moved the needle for the Nook business, at least not enough to counteract the overall trend.

Amazon doesn’t break out Kindle revenue when it reports earnings, but its devices have emerged as the leader in the e-reader category. Barnes & Noble, which hoped to leverage its physical retail stores to build a viable digital and device business, has struggled to compete with the e-commerce giant.

The book retailer is continuing to explore the separation of its Nook and retail businesses, and said at the time it bought back the Microsoft stake that a spin-off could occur by the end of August of this year.