It’s Day One for Jeff Bezos as the world’s richest person.

A surge in Amazon’s share price this morning, in advance of the company’s earnings report today, has pushed the Amazon CEO past his fellow Seattle-area billionaire Bill Gates with a net worth of more than $90 billion, according to Bloomberg. 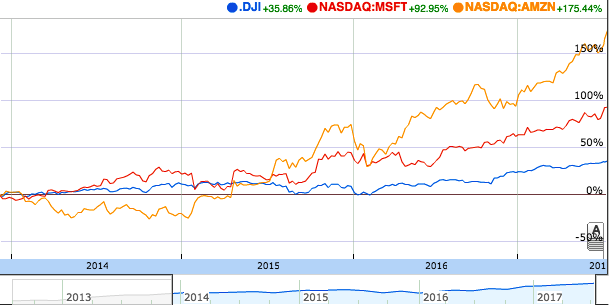 There will be no celebrations and likely not much discussion of Bezos’ new status in Amazon’s executive offices today. However, to the outside world, it’s a symbolic milestone for Bezos and the company he started more than two decades ago in a garage at what was then his rental home in Bellevue, Wash.

Amazon has expanded far beyond online book sales to become one of the world’s most influential companies, in everything from e-commerce and cloud computing to consumer electronics devices and artificial intelligence. In the process, the company has reshaped its hometown of Seattle, from its new headquarters campus north of downtown to the nearby neighborhoods that are home to many of its workers.

Much of Bezos’ wealth comes from his 17 percent stake in Amazon, which has seen a 40 percent surge in its share price this year, adding more than $24 billion to his net worth. Amazon’s market value now tops $500 billion, joining Apple, Microsoft and Google parent Alphabet as the only publicly traded companies above that mark.

Although his philanthropy doesn’t rival Gates, the Amazon founder has become more charitable as his fortunes have risen, making major donations personally and with his family to institutions including the Fred Hutchinson Cancer Research Center and the Museum of History and Industry, among others.

Amazon reports quarterly earnings this afternoon. Analysts expect $37.18 billion in revenue, up more than 22 percent, with earnings of $1.42/share.