MOUNTAIN VIEW, Calif. — Why does the Captain of Moonshots wear roller skates to work?

That may sound like the start of a joke, but Astro Teller provides a mostly serious answer at the complex that houses the think tank for Alphabet, Google’s parent company.

The inline skates help Teller, the captain who’s at the helm of what’s known as “X: The Moonshot Factory,” get between appointments in the 500,000-square-foot complex more quickly.

“This way I’m two minutes late as opposed to four minutes late,” he told GeekWire during a recent tour.

The clock is always ticking for Teller, and for X as well.

It’s not as if the idea of an idea factory was totally new when the Google X lab was founded in 2010. Microsoft Research has served a similar role for more than two decades. Bell Labs and IBM’s research centers go back decades further.

But today’s rapid pace of innovation and competition is increasing the pressure to turn blue-sky ideas into marketable products and services. No company, not even Alphabet, can afford to bet on every hunch. So X’s aim is to systematize the process of picking winning technologies. 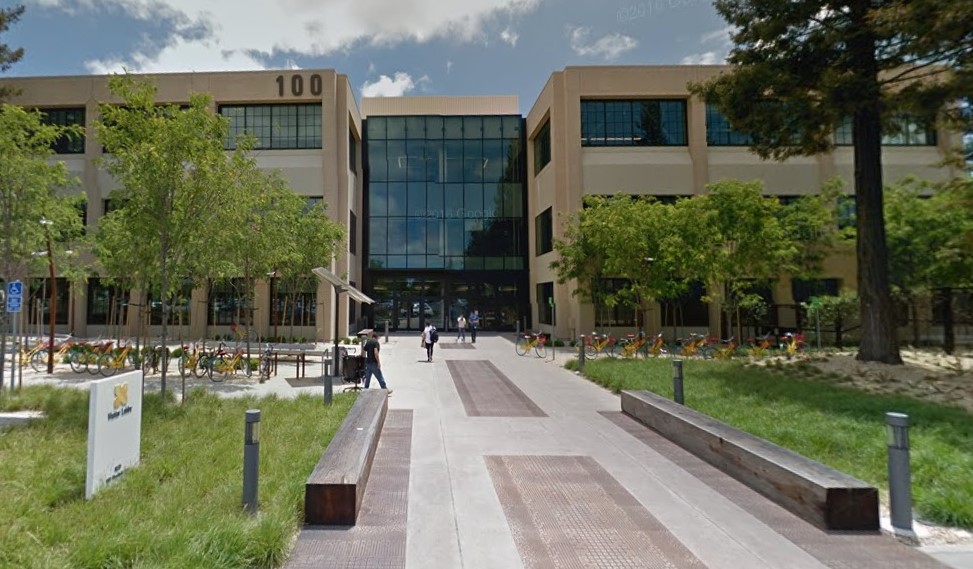 From the outside, Alphabet’s X factory looks like a typical corporate campus. (Google Photo) 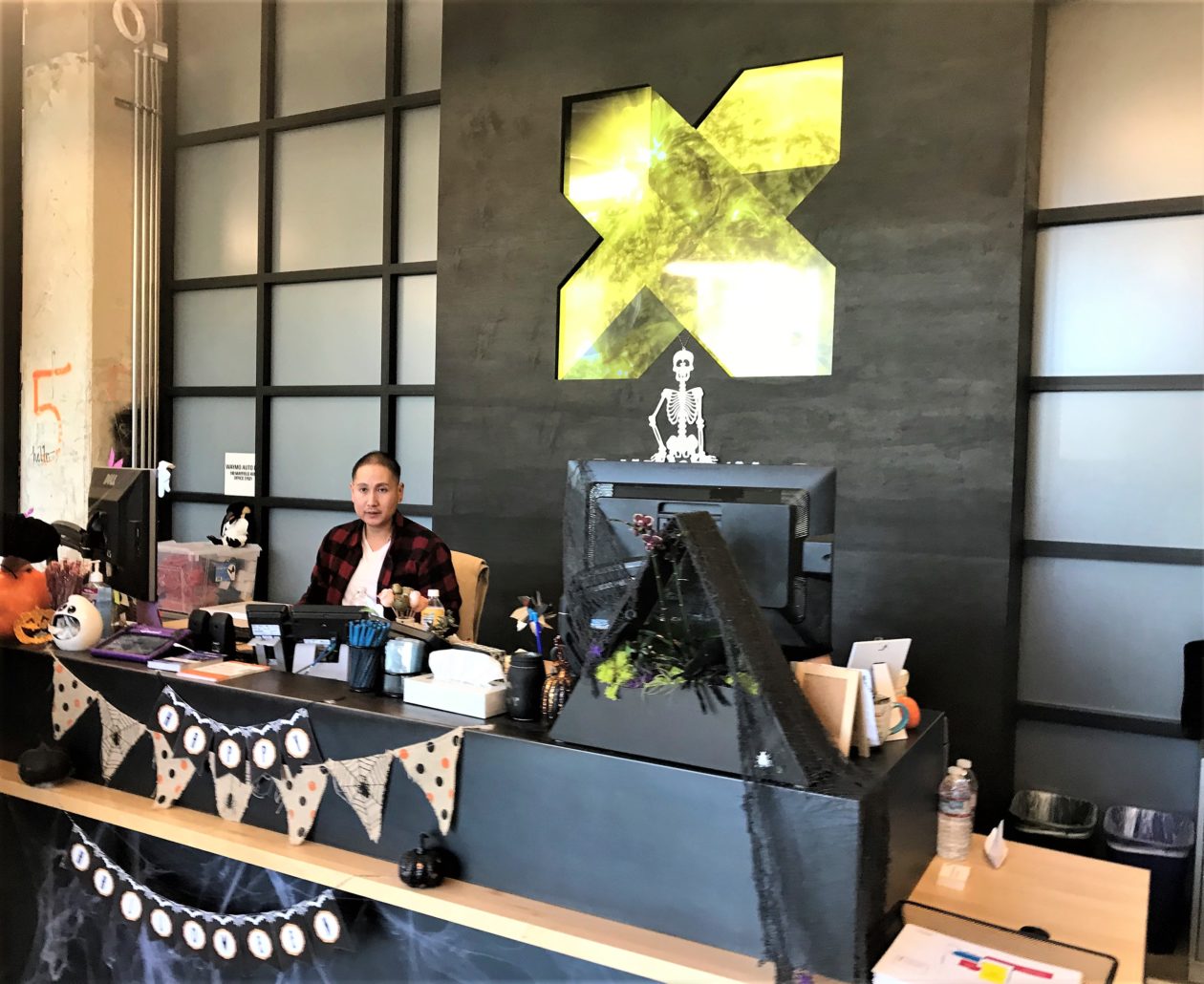 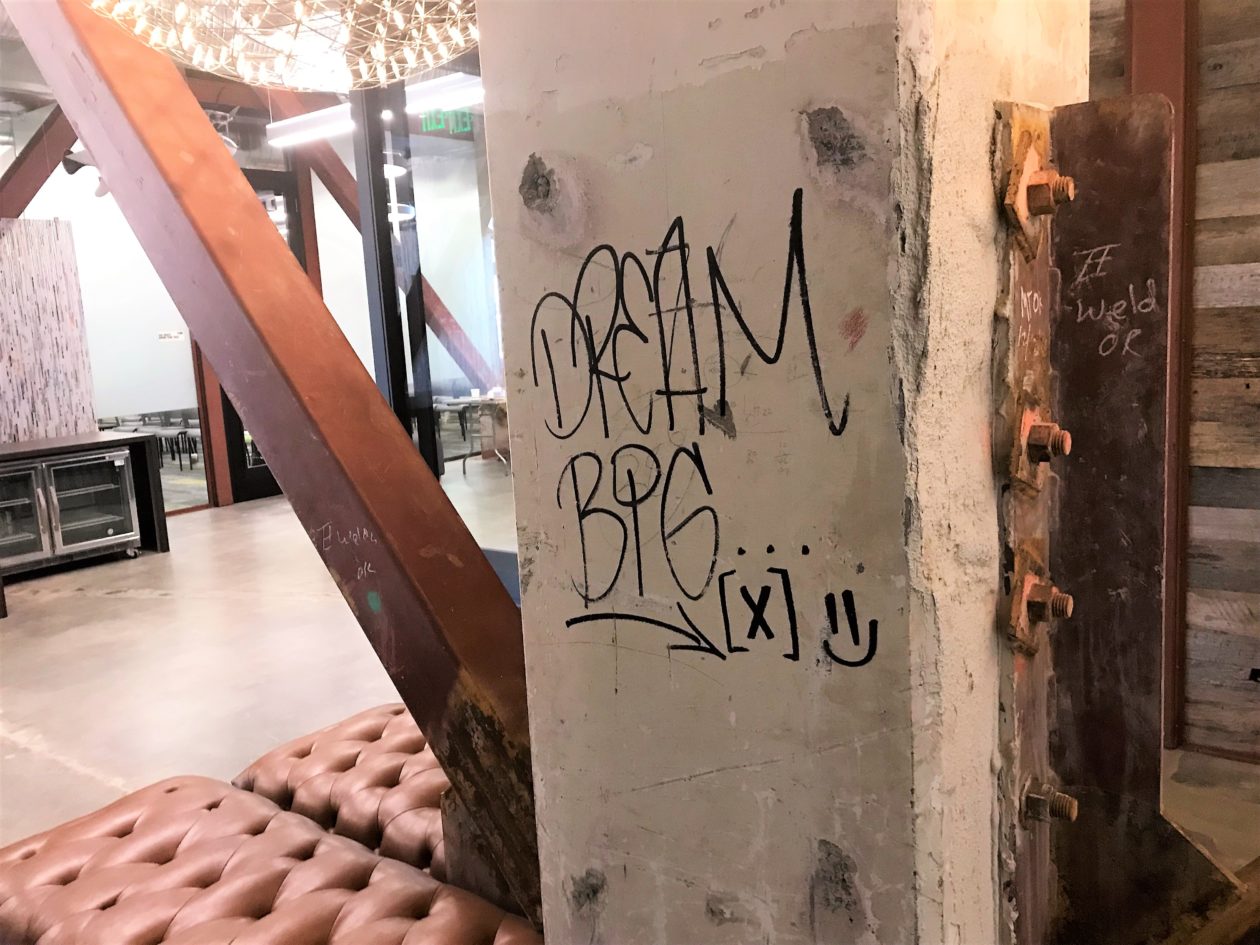 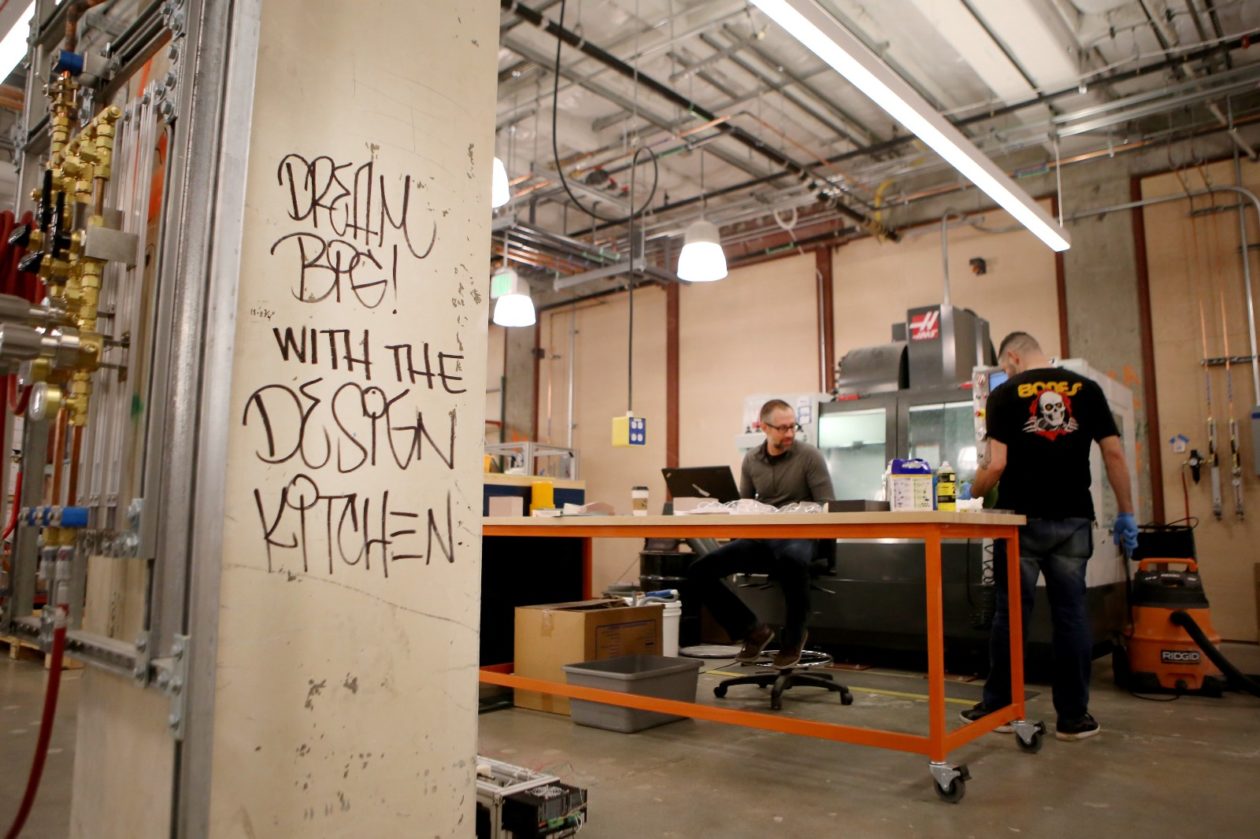 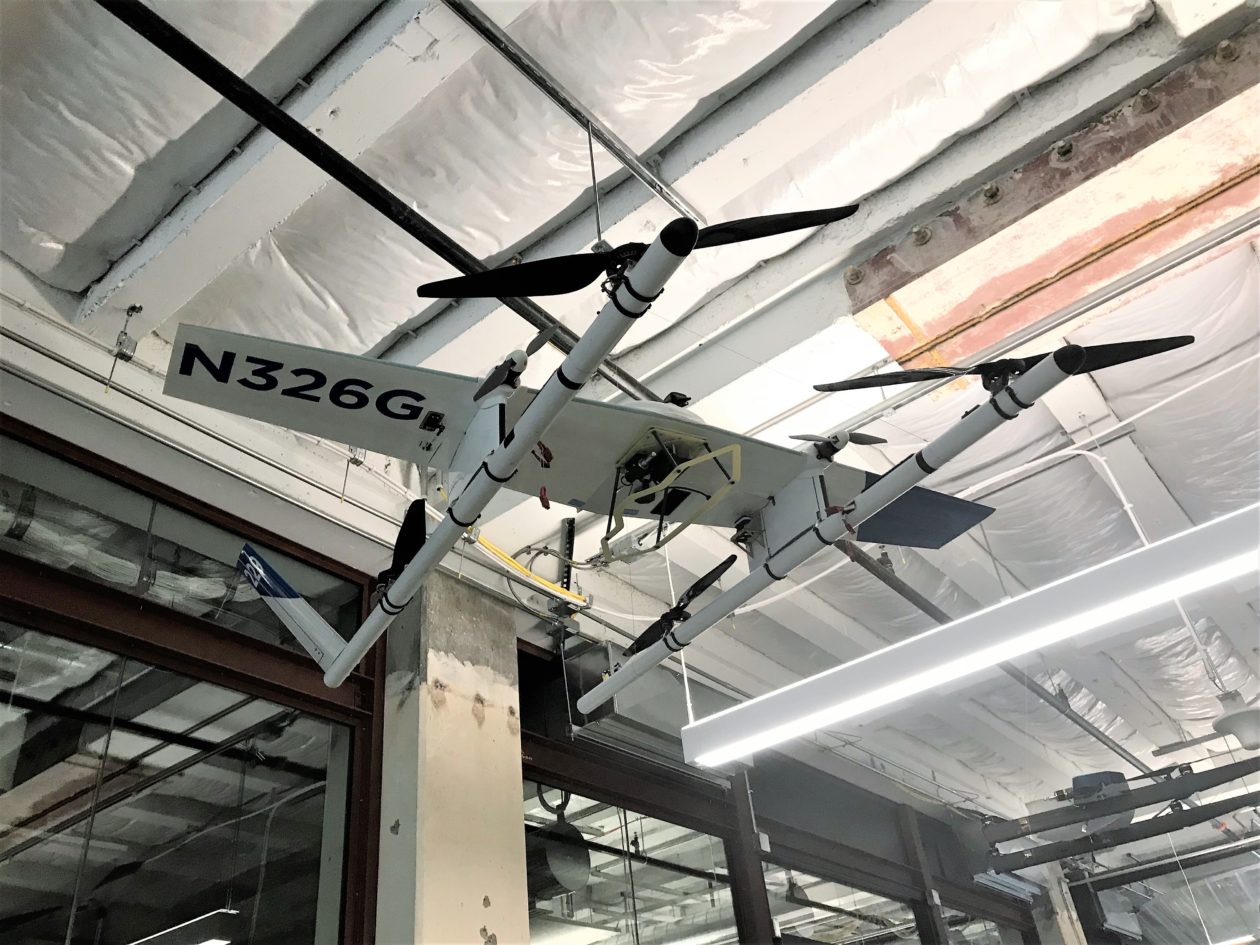 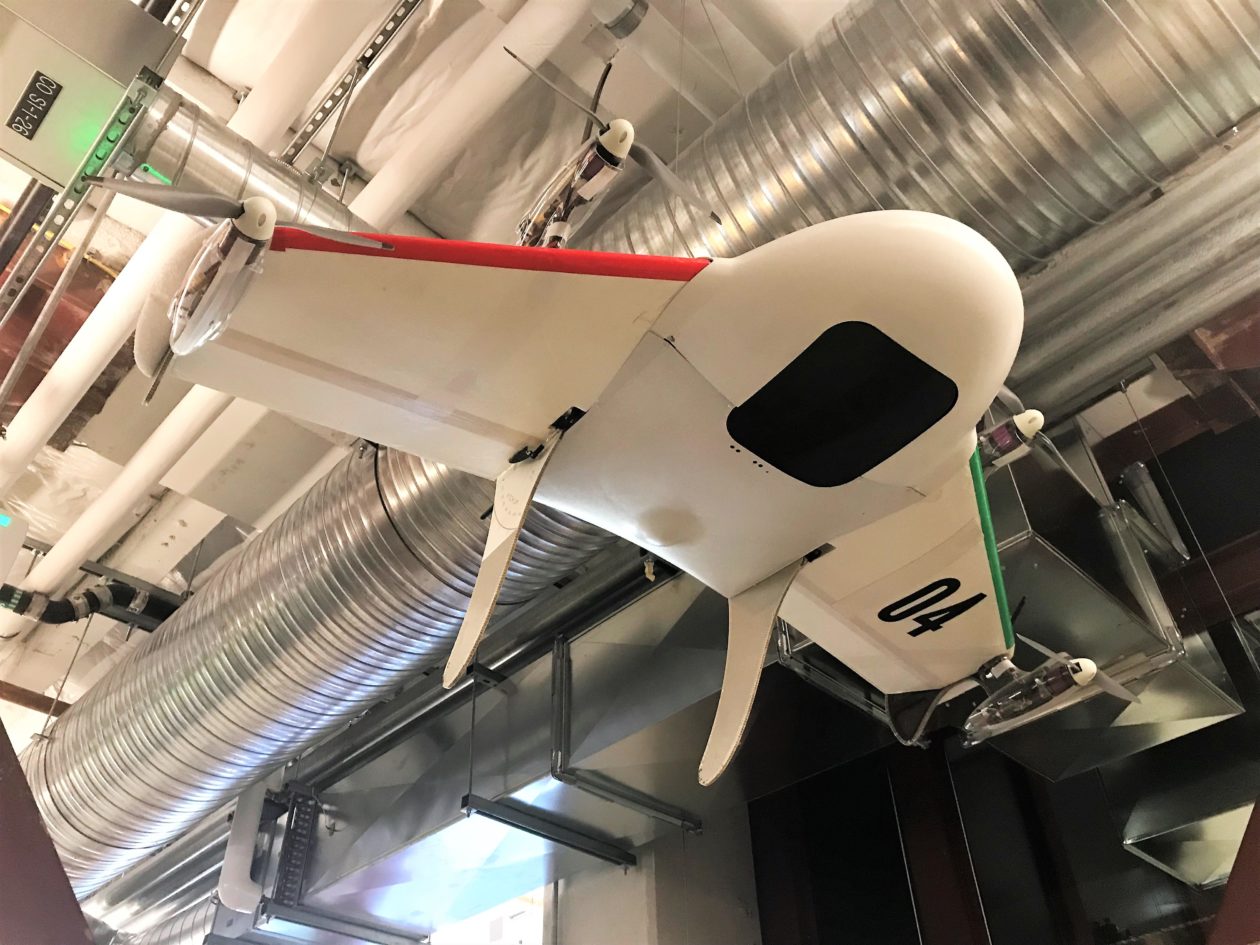 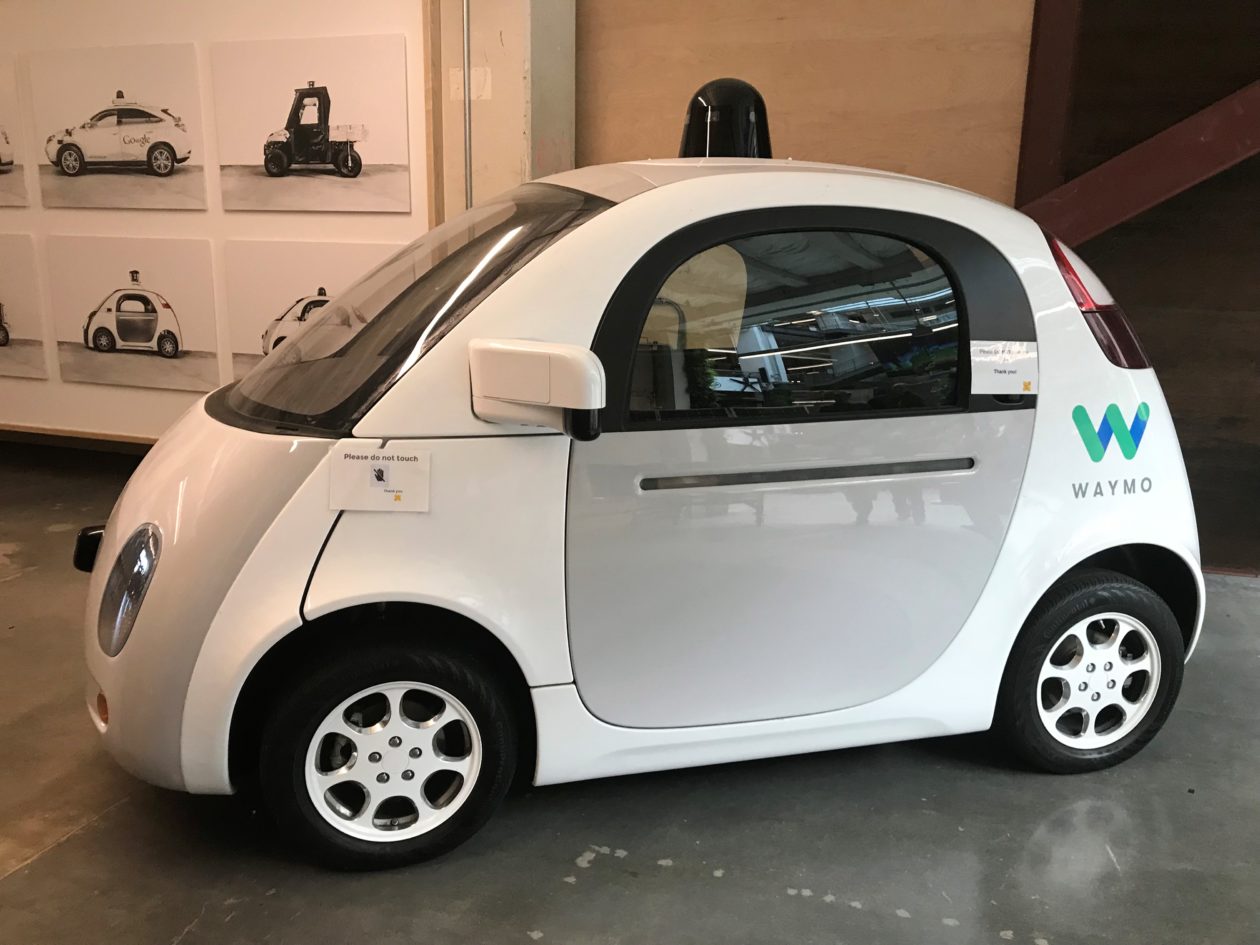 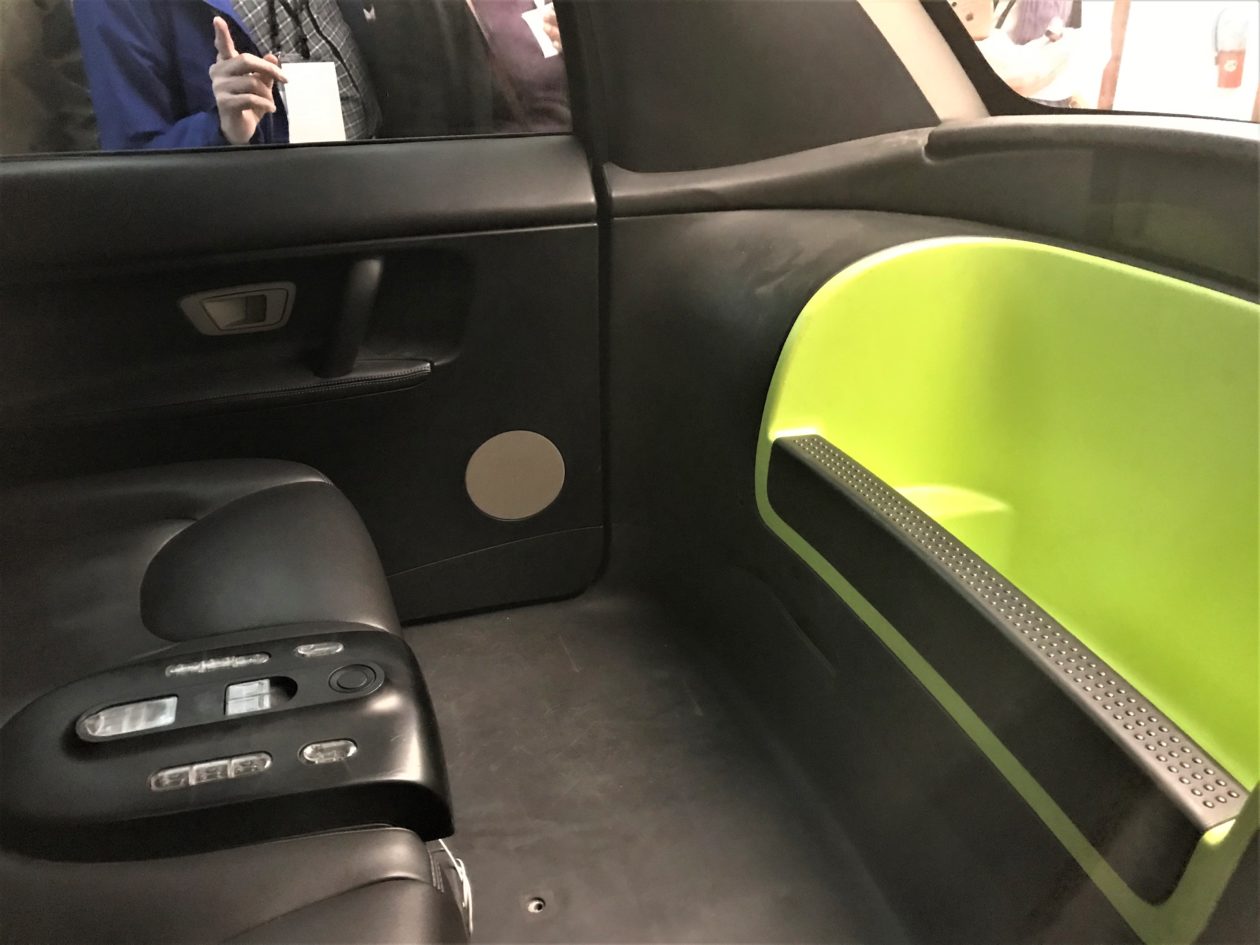 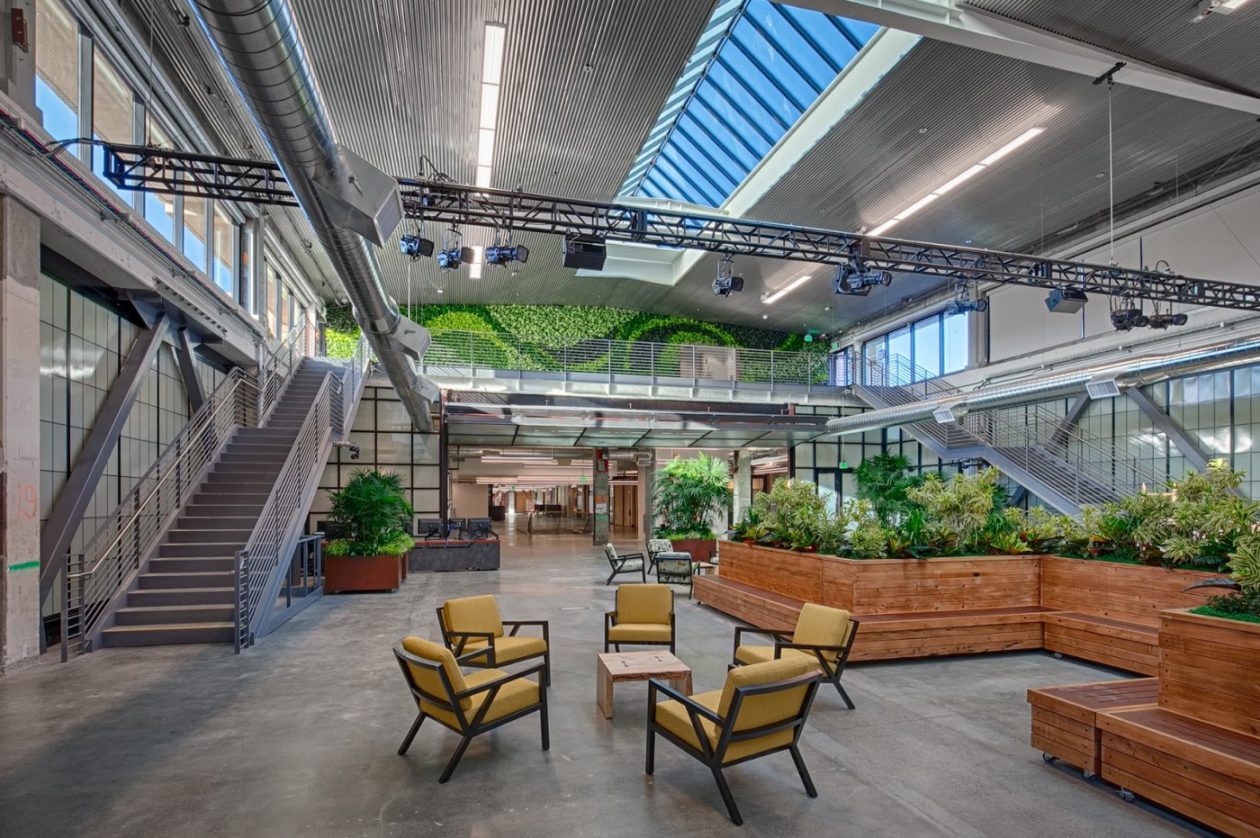 An open atrium provides plenty of space at the center of the X factory. (X Photo) 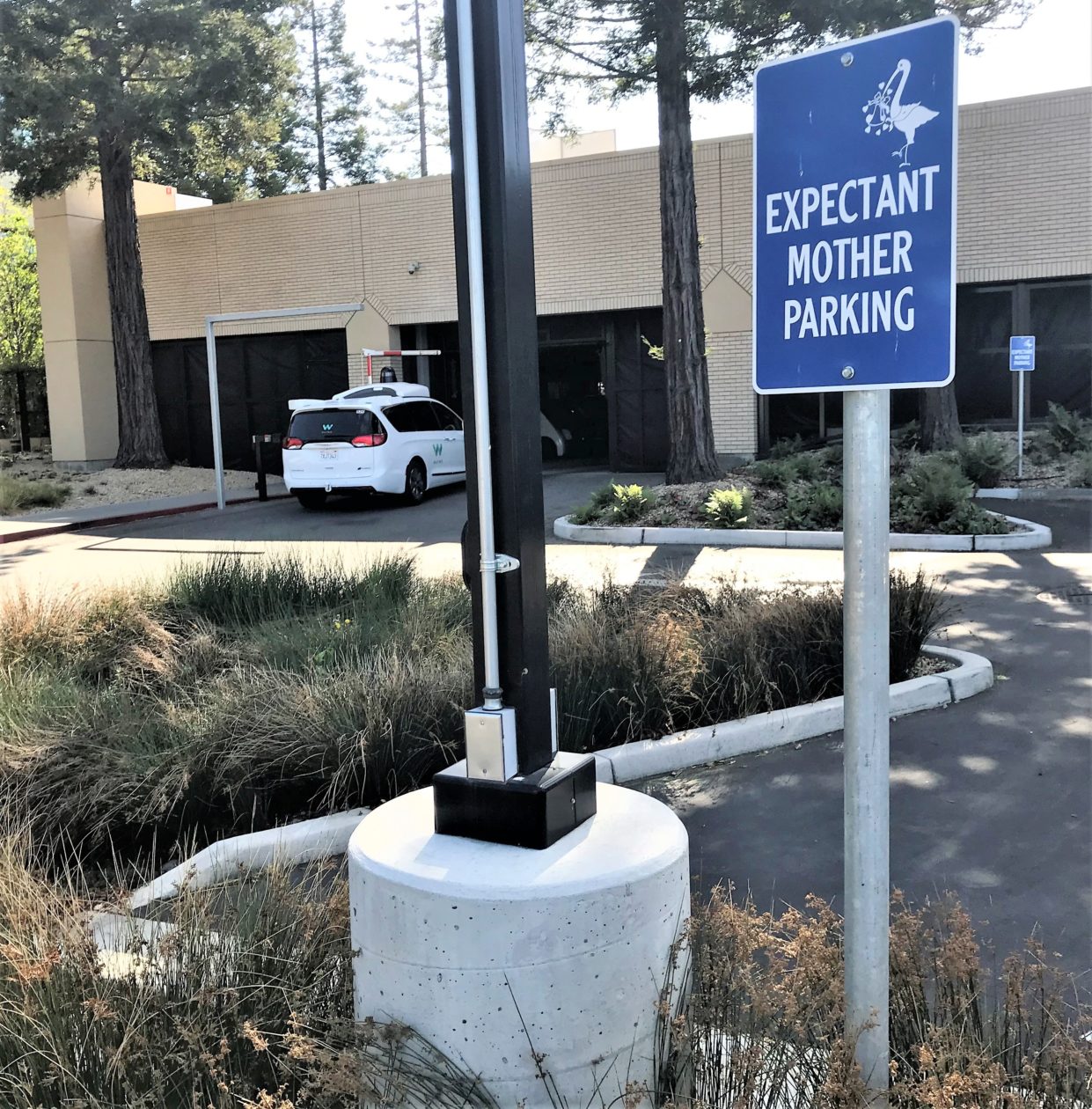 From the outside, X’s spot looks more like your typical suburban corporate campus than a factory in the 20th-century sense of the word. The facility started out in the 1960s as Mountain View’s Mayfield Mall, the first air-conditioned, enclosed shopping center in Northern California. After the mall closed down in the 1980s, the space went through a couple of incarnations as an office complex.

When X took over the property in 2015, it gave the facility an open-girder, high-tech industrial look, including bare concrete floors that are easy for bicycles, scooters and Teller’s rollerblades to navigate. Offices, hardware labs and meeting rooms are interspersed with lounge areas, micro-kitchens and a spacious central atrium.

A rooftop that was once a parking lot for shoppers now serves as a drone testing ground. During our visit in late October, you could hear the buzz of Project Wing’s aerial vehicles up above. A ground-level greensward is surrounded with netting that can be drawn around to provide another secure area for testing drones. And you can occasionally see a Waymo self-driving vehicle with a human behind the wheel, making its rounds through the parking lot.

Waymo is one of the “graduates” of the moonshot factory’s development program. It started out as a Google X project, but was transformed into a stand-alone Alphabet subsidiary last December. This month, Waymo announced that it will soon go public with a ride-sharing service in the Phoenix area that uses fully autonomous vehicles.

X sets a high bar for the projects that get a green light: They have to address a huge problem that affects millions or even billions of people. The project has to propose a radical solution to that problem. And there has to be a breakthrough technology to bring about that solution.

“The requirement that all three of these things be true is enough to cause us to throw out more than 99 percent of our ideas,” Teller said.

Some ideas go through months of investigation before they’re nixed: For example, an automated vertical farming venture was shut down because the project team couldn’t figure out how to use the method to grow staple crops. (Amazon billionaire Jeff Bezos is backing a similar venture called Plenty in Kent, Wash.) A project called Foghorn worked out a way to convert seawater into carbon-neutral methanol fuel, but at an unworkable cost of $15 a gallon.

Other ideas take a while to percolate, such as the power-generating kites of Makani, the delivery drones of Project Wing, and the Google Glass project that caused a huge fuss when it went beta in 2013-2014 and was recently revived as an enterprise product for workplaces.

Then there are the moonshot stars. In addition to Waymo, X’s graduates include Google Watch, a geothermal energy venture called Dandelion, and a healthcare venture called Verily.

X’s latest star hasn’t even graduated yet. It’s Project Loon, a balloon-based wireless communications platform that’s been under X’s wing since 2011. Loon took the spotlight in the wake of Hurricane Maria, which knocked out power and communications for nearly all of Puerto Rico’s 3.4 million residents.

Before the storm, Project Loon’s team had been working on an AI-based navigation system that can keep high-altitude balloons over a given area for weeks or months at a time to provide aerial internet connections. Peru was the primary testing ground, and Puerto Rico was one of the launch sites. After the hurricane hit, the focus shifted to filling the gap in Puerto Rico. The team quickly worked out arrangements with Puerto Rico’s government and federal authorities as well as AT&T and T-Mobile to boost connectivity.

“The Puerto Rico thing hasn’t been easy, because we didn’t expect for Loon to work that way,” Project Loon engineer Sal Candido said. “We weren’t working on navigation for Puerto Rico, we weren’t working with any of the partners, we didn’t expect to bring up service that fast. But that’s the way this project works, and the way X works. We thought we’d give it a try. Hopefully, we’ve been able to help some people.”

Since turning on service, #ProjectLoon has delivered basic internet connectivity to more than 100K people in Puerto Rico. https://t.co/s0zmFB9dRy

“We’re very bullish about Loon, and they have significant work still to do — call it two or three minor miracles that they still need in order to be a thriving business,” Teller said. “But unlike some projects, they have about 10 different levers that they can pull, so they can spread that need for two or three small miracles across a lot of different things. … We have great confidence that they’re going to do it.”

Teller voiced great confidence in X’s future as well. More than a year ago, there were rumblings that the moonshot factory was getting bogged down in organizational inertia, but the emergence of Waymo and other graduates seems to have turned the tide.

Idea factories are turning into a growth industry — thanks in part to new entrants in the Seattle area such as BlueDot, Intellectual Ventures’ ISF Incubator and the Allen Institute for Artificial Intelligence’s startup incubator. The way Teller sees it, all that interest validates the approach that he’s been pioneering for years.

So does that mean Teller’s satisfied with X’s formula? No way.

“We’re never happy with the model that we have. We’re constantly trying to learn and improve it,” he said. “We have a joke internally: ‘We’re the worst moonshot factory in the world … except for all the other ones.’ ”

The X factory tour was organized in conjunction with the World Conference of Science Journalists in late October. GeekWire’s Alan Boyle is the president of the Council for the Advancement of Science Writing, which was one of the organizers of WCSJ2017. For another perspective on X, check out the Student Newsroom report on the WCSJ2017 website.