Sonos, the high-tech connected speaker maker that opened a Seattle office about two years ago, is turning up the volume on its local presence.

Sonos established its Seattle presence at the Bullitt Center, a six-story, 50,000-square-foot structure on Capitol Hill that bills itself as the “greenest commercial building in the world,” in 2015 and started with just 10 people. Today, the company is up to 70 people in the office, with another 35 or so open positions locally, and it has outgrown its initial space. Sonos recently picked up another half floor, giving it two full floors in the building, totaling about 13,000 square feet with room for about 100 people.

GeekWire got a tour of the space earlier this month. Music blares in every nook and cranny of the office, naturally, and walls are lined with various Sonos speaker models signed by musicians. Strewn throughout are guitars hooked up to speakers and amps, what looked to be a karaoke station, and a central living room area, complete with a fully stocked bar.

The office is led on the engineering side by Antoine Leblond, who spent 25 years at Microsoft and rose as high as vice president of Windows, and on the commercial side Brad Duea, former Napster president and senior vice president of marketing for T-Mobile. 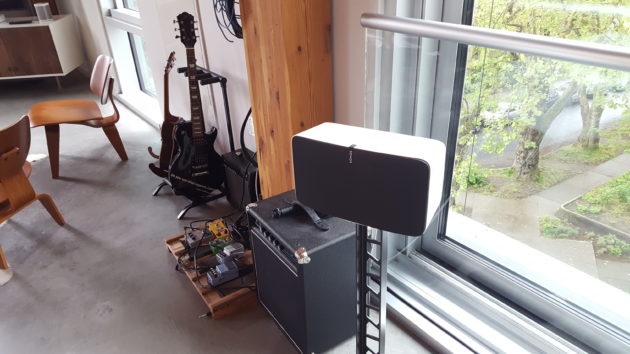 Sonos is one of those companies that tries not to have one headquarters office and wants to give employees choices in where they work. As a result, the Seattle office is lined with video conferencing rooms to communicate with teams in other offices in Santa Barbara, Calif., Boston, Australia, the Netherlands, France, Germany, the United Kingdom, Denmark and China.

Seattle is a perfect fit for Sonos, Leblond and Duea say, because of its musical history and status as a global tech hub. Though the office is mostly home to software developers, a variety of people in different roles work out of Seattle, including Sonos’ Director of Latin America, Felipe Sanchez Romero, another former Microsoft manager.

“We are going to keep hiring people for a while here,” Leblond said. “We really look to Seattle as one of the most important parts of our software hiring strategy, because it’s just such an amazing software town and there’s so many great software folks around here.”

Being in Seattle helps Sonos work closely with one of its most important partners, Amazon. Sonos and Amazon compete in the at-home speaker arena, but the two companies decided to team up last year to work on ways for users to control their sound systems via an Alexa-powered device such as the Echo, Echo Dot or Tap. The new integrations will be available later this year as part of a free software update to existing Sonos devices.

Leblond explained that Sonos is working on a deeper integration with Alexa than people are used to seeing. Teams from both companies are making sure that the experience is seamless, and that starts, oddly enough, with grammar and syntax. Rather than building a clunky command like, “Alexa, ask Sonos to play” Song X, by Artist Y, Sonos wants something a little easier to use.

And it’s not just Alexa where Sonos and Amazon cross paths. Sonos builds on Amazon Web Services, Sonos supports Amazon’s music service, and of course, Sonos’ speakers are available for purchase on Amazon.

In addition to its Alexa integration, Sonos last year announced third-party app support, meaning users can control their Sonos speakers with apps like Spotify via Spotify Connect. Previously, Sonos users could only control their music from Spotify via the Sonos app.

Leblond and Duea explain that for a long time the prevailing theory about the Internet of Things and home automation markets was that people would choose one central way to control everything: lights, cameras, music and more. But that hasn’t been the case, and those markets are “blowing apart,” Leblond said, with people using everything from a smartphone app, to a kitchen tablet, to a voice-activated device to control their music and other home tech functions. Sonos has shifted away from an experience where people “lived in the Sonos app” to a more open system.

“What we’ve been working on a lot is building out a platform that lets us support this huge variety of control mechanisms,” Leblond said. “It breaks wide open the controlled experiences and the ways to make your Sonos system do things.” 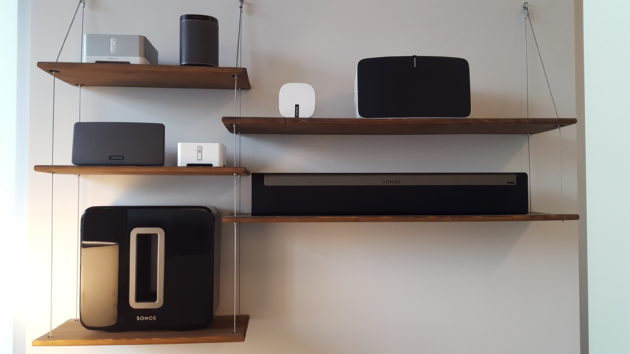 Sonos chose the Capitol Hill neighborhood for the Seattle office due to its reputation as the musical hub of the city. The Bullitt Center, which actually produces more energy than it uses and requires tenants to stick to energy budgets, made for a great landing spot because it represents strong values of conservation, something the company cares about.

Any company that does manufacturing, like Sonos does, is going to have significant environmental impact. Sonos is aware of its impact, and one way to reduce it is by building a limited number of products and making sure they last. Sonos is also putting a lot of work into reducing the amount of power its devices consume when they aren’t being used.

Sonos’ Seattle team has found creative ways to stay within the building’s energy budgets, such as putting timers on testing units so that they aren’t eating power all the time.

As we sat in the office, we got a peak at the building’s capabilities. As the sunlight ebbed and flowed throughout the cloudy afternoon, exterior blinds adjusted to let in just the right amount of light. To get to the space, I climbed what is called the “irresistible staircase,” a wooden set of stairs on the north side of the building, with a view back to the Seattle skyline.

“It’s neat to see people kind of obsess over how efficient they can make even the way they work around here,” Leblond said. “I think it’s really interesting for the Bullitt Foundation as well, as almost an experiment for them, as the tech world isn’t necessarily known for being particularly power efficient, but can you have a tech company work in an environment like this that is consistent and supportive of what they are trying to achieve.”