Stack Overflow CEO Joel Spolsky is adamant in his belief that the open office is no good for developers. They want quiet, private space that allows them to focus on the task at hand.

“Facebook’s campus in Silicon Valley is an 8-acre open room, and Facebook was very pleased with itself for building what it thought was this amazing place for developers,” Spolsky said during the 2016 GeekWire Summit. “But developers don’t want to overhear conversations. That’s ideal for a trading floor, but developers need to concentrate, to go to a chatroom and ask questions and get the answers later. Facebook is paying 40-50 percent more than other places, which is usually a sign developers don’t want to work there.”

The popular Q&A site for programmers released its annual Developer Survey this week and delved into topics of concentration, demographics, salaries, education and more. According to the survey, which garnered responses from about 64,000 developers, more than half of respondents liked some music while coding and could even tolerate a loud keyboard in a shared office.

But another 46 percent chafed at the prospect of a noisy coder, and 24 percent wanted absolute silence when they are heads down on a project.

“This is perhaps another good reason to give developers offices,” the report says.

The survey notes that it has become easier over the years to quickly learn to code even as an adult in a second career, and land a good job in technology. The presence of coding schools should make the industry more diverse, but the data shows that hasn’t happened yet.

It’s clear that the industry is not totally happy with these figures as 89 percent of respondents agreed to some degree that diversity in the workplace is important. Last year that figure was only 73 percent.

Tech has become a dominant industry in the Seattle area, and a driver of commerce nationwide. Many of the most valuable companies in the world today come from the tech sector. These companies are fighting tooth and nail for top talent, especially in the U.S., and that can be seen in salaries. 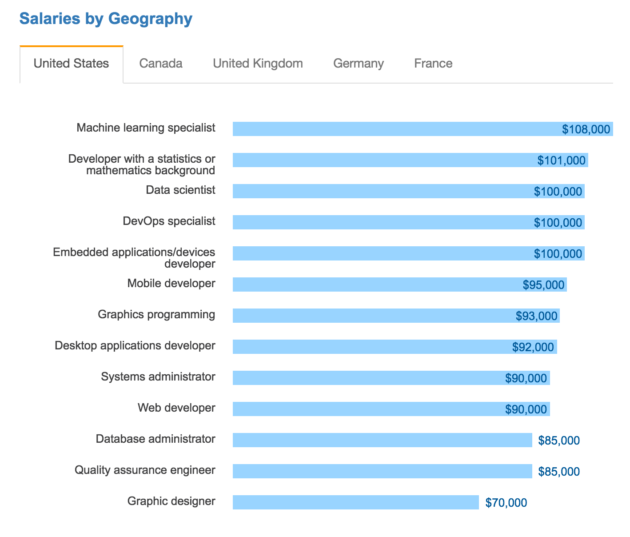 A comparison of salaries among developers in the U.S. and Canada. 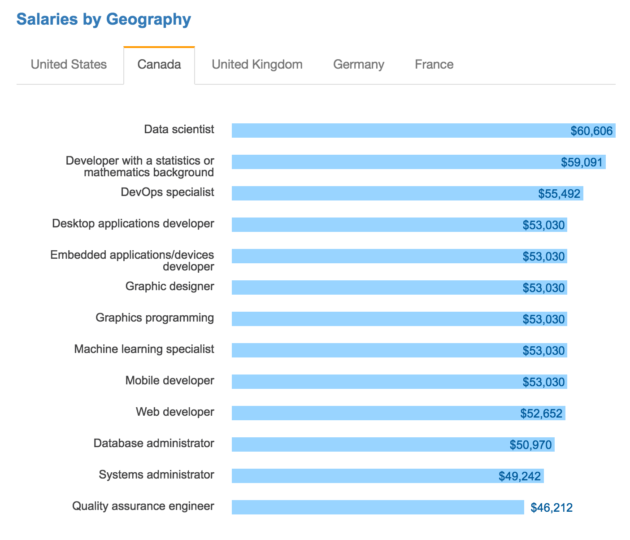 About 57 percent of developers say they are either greatly or somewhat underpaid, and another 36 percent think they are properly compensated.

Pay is important, but great benefits could mean the difference between poaching talent from competitors and missing out. The most important benefits among respondents all correlated to health and work life balance. The top three favored benefits were more vacation days, options for working remotely and good health insurance.

Working from home can make up for the privacy issues working in an open office environment. About 53 percent named the ability to work remotely as a top priority in a job, and 64 percent of developers said they work remotely at least once a month.

Javascript is the favored coding language of developers for the fifth year in a row, according to the survey, with SQL coming in second. Developers tend to work on multiple platforms, and Windows was the most popular this year, with a 41 percentage usage rate, followed by Linux at 33 percent, and Android and Amazon Web Services, each with about 28 percent usage. 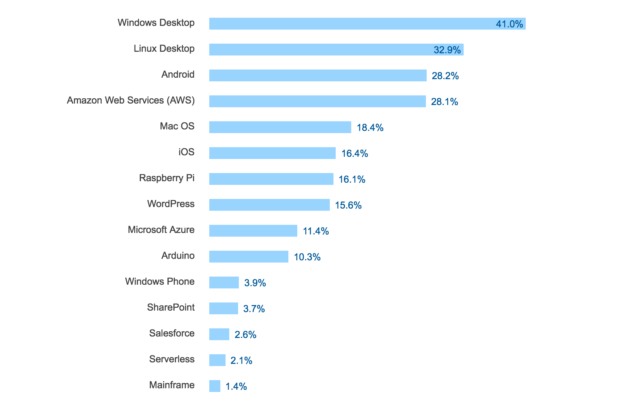 Android is the preferred mobile platform, beating out iOS 65 percent to 58 percent. Obviously many developers work on both platforms. A disproportionate number of developers favor iOS in the U.S. and U.K. relative to the rest of the world.

Even as mobile apps become more prevalent, Web design is still the main focus for most developers. About three quarters of respondents self-identified as web developers, though many said they also work on mobile and desktop apps.