Beijing-based Ofo just launched its bike-sharing service in the Emerald City, joining other companies like Spin and LimeBike that have placed thousands of bicycles around town in recent weeks as part of a six-month pilot program that has made Seattle a key market for these services to prove themselves before rolling out nationally.

So how does Ofo stack up? After testing out Spin and LimeBike for a previous review, we did the same with Ofo this weekend, finding this latest bike-sharing service to be a worthy competitor despite some problems of its own.

Ofo offers high-quality bikes that are sturdy and well-maintained. Their taller frames will be welcomed by larger riders, and will be too large for smaller riders. In terms of size, you could think of LimeBike as small, Spin as medium, and Ofo as large.

The smooth ride of the Ofo bikes make this the first of the three services that could realistically be used for an everyday bike commute. Ofo says they’re lighter than Spin or LimeBike. However, like Spin, there are only three gears, versus the eight gears on the LimeBike, and we encountered an annoying glitch with the gear shifter on one Ofo bike that we tested.

The Ofo smartphone app is the most advanced of the three services we’ve tested so far — with a built-in feature for reporting specific problems, for example — but we also encountered some isolated glitches with the app in our usage.

Ofo launched in Seattle with a few hundred bright yellow bikes on Thursday, and will gradually roll out the full 1,000 that is permitted — Spin and LimeBike both plan to do the same. That limit goes up to 2,000 next month and will be lifted after that — Spin says it will ultimately have 10,000 bikes spread across Seattle.

Ofo is the most mature of the three services that have launched so far. (A fourth service, Dallas-based VBikes, is set to launch in Seattle soon.) Ofo originally started in China, where bike-sharing has taken off. It has a fleet of 8 million yellow-laden bicycles in more than 170 cities worldwide. Seattle is Ofo’s first expansion into the U.S., and the company recently raised a $700 million investment round.

For those who have tried Spin’s orange bikes or LimeBike’s green bicycles, Ofo’s service will feel familiar. You find the bikes with a smartphone app and unlock them using a QR barcode or 6-digit code. There’s no need to return the bicycles to dedicated docking stations, unlike Seattle’s ill-fated Pronto program, as you can leave them in an appropriate spot at your destination, similar to how car2go and ReachNow operate their car-sharing services.

There is, however, a difference in price — Spin and LimeBike charge $1 per half hour, while Ofo charges $1 per hour.

Like the other services, there is also no helmet offered, which results in breaking the law unless you bring your own.

Read on for more observations of Ofo and how it fits into the existing bike-sharing market.

The app: Ofo’s app is slick, which is expected given that the company already operates a fleet of 8 million bicycles. It’s intuitive, fast, and easy to access payment options, past trips, and the user guide; Ofo also makes it easy to report broken or illegally-parked bikes.

One downside with the iOS app is that there’s no option to use Apple Pay. You have to enter your credit card manually to register for an account, and pulling out your wallet isn’t always a great idea when you’re picking up one of these on a busy street for the first time. So far, Spin is the only one of the three services to offer Apple Pay integration on iOS.

GeekWire editor Todd Bishop also encountered a couple glitches when trying to report a problem with the gear shift on his bike. At one point, the app showed prompts in Chinese, and an “invalid parameter” message repeatedly stopped the report from being submitted. 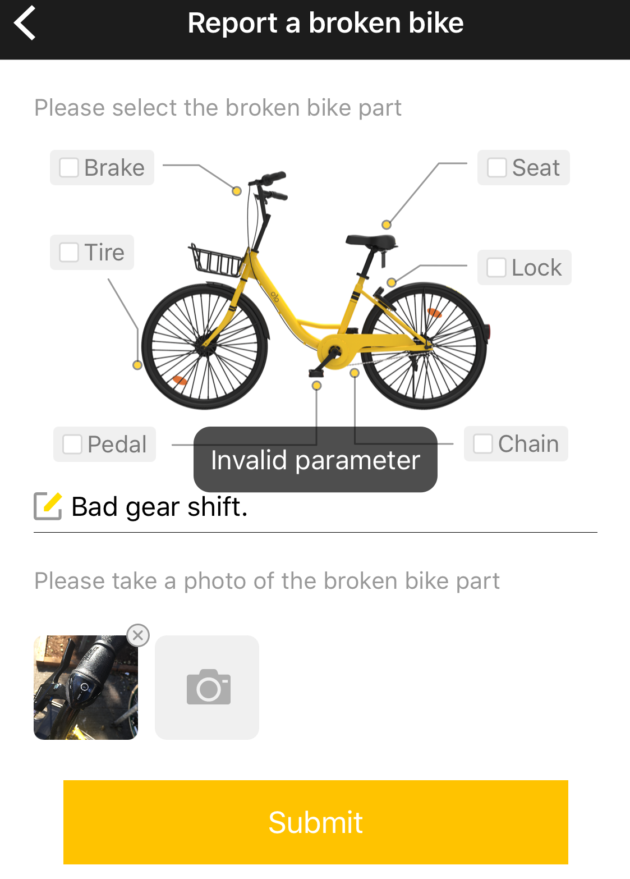 The app’s built-in maps show your precise route with your trip history, not merely your stopping and ending point, but the GPS appeared to go haywire in some cases, showing Todd traveling to the Phinney Ridge and Magnolia neighborhoods when in fact he stayed in Ballard.

We both wished there were more than just three gears. In addition, on one bike, the gear shifter was misaligned, putting the bike into second gear when it was supposed to be in first, and not staying in first gear unless it was forcibly held there. 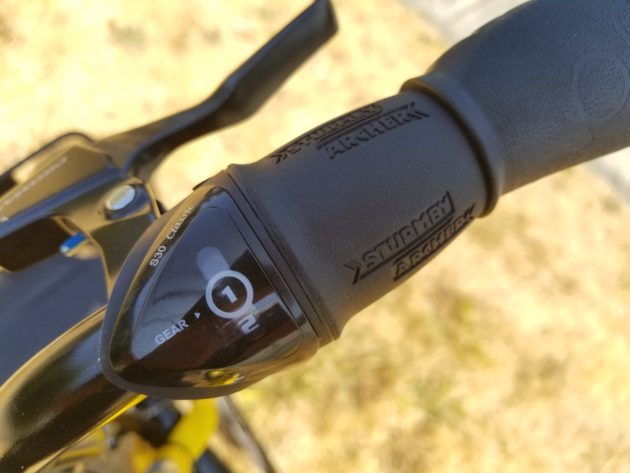 As with Spin and LimeBike, the Ofo bikes come with a built-in headlamp, powered by the front wheel in this case. We haven’t had a chance to test the brightness of the Ofo bikes at night yet. 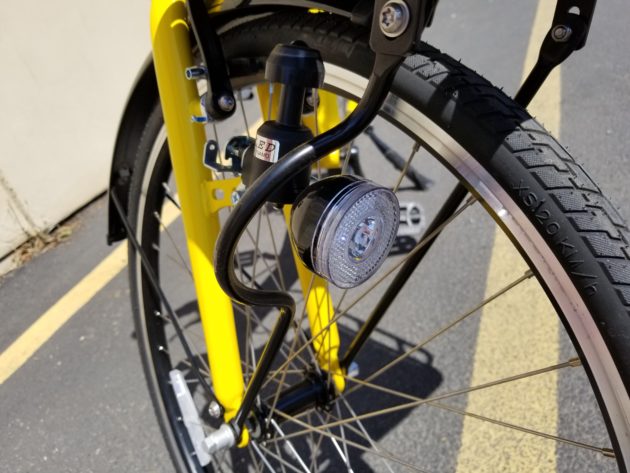 Ofo’s basket is underwhelming. It’s shorter than what Spin and LimeBike offer, and the cupholder doesn’t do a good job of keeping your water bottle in place. Definitely don’t try putting a coffee in this. 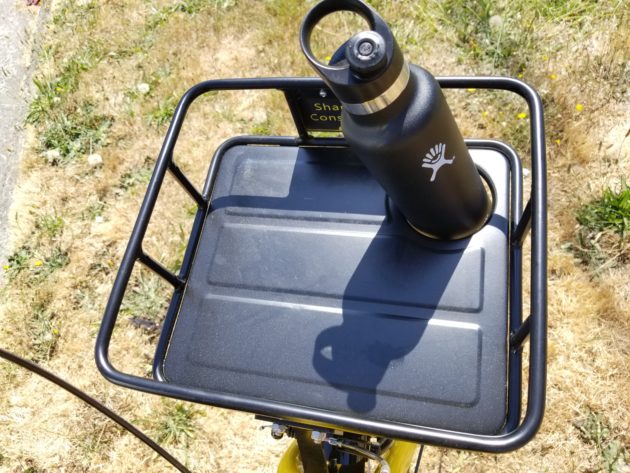 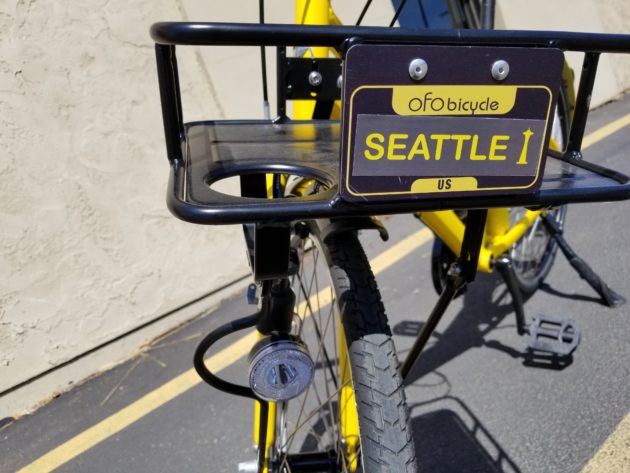 The locking and unlocking mechanism on Ofo is very similar to Spin and LimeBike. The bar under the rear wheel unlocks quickly when you scan the QR code, and you end the ride by snapping the lock back in place. It doesn’t play a little ditty when you lock and unlock, like the LimeBike does. 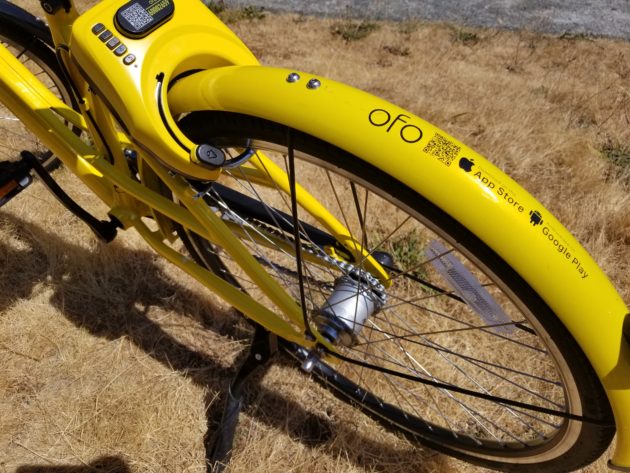 Final verdict: For me, nothing really stood out that separated Ofo from Spin or LimeBike. For extended trips, the $1 per hour rate — versus $2 for Spin or LimeBike — is attractive, but from an overall riding perspective, I prefer LimeBike’s bicycles. For a quick ride, all three are interchangeable, similar to my view on renting a car2go vs. ReachNow.

For Todd, the larger and lighter frame of the Ofo bike would make him choose it over Spin and LimeBike. Hopefully the company will smooth out the technical glitches in the app and the mechanical issues with the gear shift. Todd also likes the clever “ofo” logo, which looks like someone riding a bike.

We’re already seeing people use these services all over town — but of course, it’s summer. What will happen in the winter, when the roads get slick? And will the companies be able to keep up with maintenance? Stay tuned.

Next up in our testing: VBikes.

Previously: Testing the new breed of bike sharing: We pitted Spin vs. LimeBike on the streets of Seattle