Whole Foods shoppers were treated to a grocery celebrity sighting on Tuesday morning when John Mackey strolled through his company’s store in Seattle.

The Whole Foods co-founder and CEO dropped by the grocer’s South Lake Union location in Seattle nearby Amazon’s campus, just one day after the tech giant completed its $13.7 billion acquisition of Whole Foods.

Mackey, who co-founded the organic grocer nearly four decades ago and will remain CEO, was hanging around the store’s coffee bar with a few others when GeekWire approached him and asked about the merger that quickly lowered both prices of Whole Foods items and shares of grocery competitors.

He declined to comment on the record, but based on GeekWire’s conversation with the 64-year-old whose appearance (khaki shorts and trail shoes on Tuesday) doesn’t fit the typical CEO mold, it certainly seems like the man once referred to as the “Bill Gates of organic foods” is happy about the transition and his company’s new owner.

It’s the same feeling Mackey expressed at a Whole Foods town hall meeting in June, when he told employees that his first discussion with Amazon executives was “truly love at first sight.”

“And — when we huddled together, it was like we just had — we just had these big grins on our faces, like, ‘These guys are amazing,'” Mackey said of meeting Amazon execs. “They’re so smart. They’re so authentic. They say what’s on their mind. They’re not playin’ a bunch of BS games. And it was like, ‘This is gonna be so incredible.’ ‘Cause we were talkin’ about the things we can do together, things that I cannot talk about today and won’t be able to talk about until this deal closes.”

With the deal now closed, Amazon wasted no time making some initial changes. On Monday it lowered the prices of commonly-purchased items like apples, eggs, tomatoes, salmon, and beef — some products, like avocados, had prices slashed by up to 50 percent. 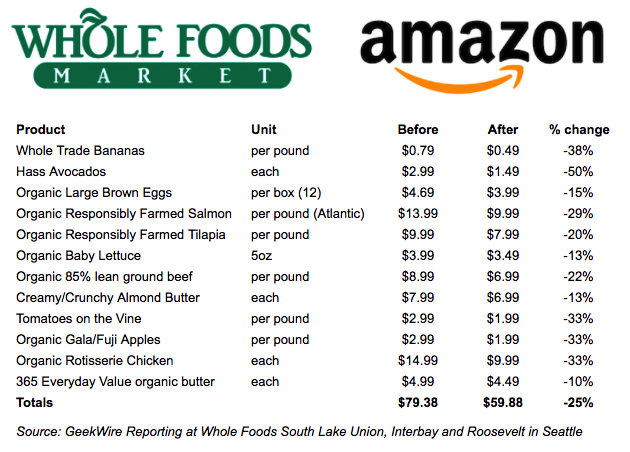 Other changes on the way include integration of Amazon’s Prime membership program at checkout; Amazon Lockers at Whole Foods locations; and “more to come,” as noted by new branding visible in the stores this week. 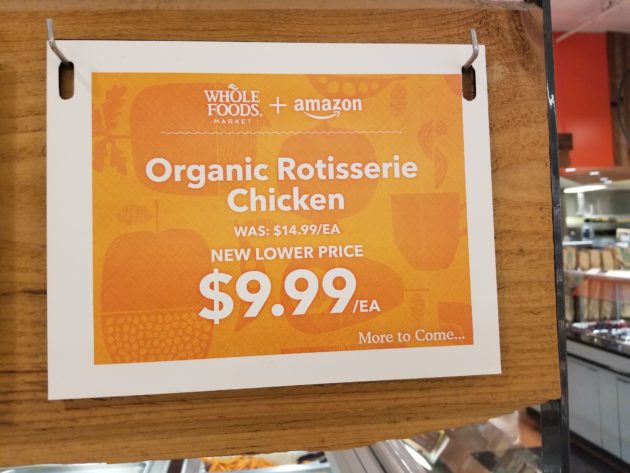 At the town hall meeting in June, Mackey noted that having Amazon as an owner would help Whole Foods reduce cost “while improving our service to our customers.” He also made it clear that technology will play a big part in Whole Foods’ evolution, citing Amazon’s reputation for innovation.

Later, he addressed one of Amazon’s core values: “One of the things they do better than us, they are more customer-centric than we are. They really are,” he said, according to the transcript. “And one of my takeaways is that, by God, we’re gonna become as customer-centric as Amazon. … We’re gonna import their passion about that.”

He added, “Because I think, sometimes, our company’s gone a little bit too much team member focus at the expense of our customers. And that’s one definite evolution that’s gonna happen. I love the passion these guys have around the customer. They put the customer first in everything they do and think backwards. And we’re gonna be the same way.”