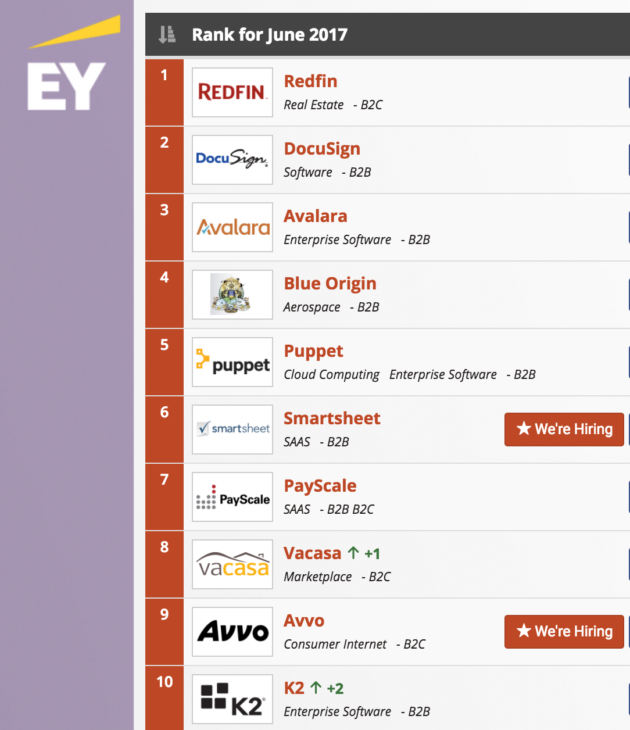 The summer can be a slow time in the business world, but that doesn’t appear to be the case in the Pacific Northwest startup community.

Numerous startups in Seattle and Portland are putting to work investment dollars they have landed over the last few months, shooting them up the GeekWire 200 list of privately held Pacific Northwest startups, presented by EY. This means plenty of new products, as well as even more tech jobs in a region already teeming with tech activity.

Real estate company Redfin, which took over the top spot on the GeekWire 200 from DocuSign for the first time last month, hung on to number one in June. Rounding out the top five are Avalara, Blue Origin and Puppet. Other movers at the top include Vacasa, up a single spot to number eight, and K2, the enterprise technology company, which jumped back into the top 10 this month.

It may not be long before Rover.com graduates from the GeekWire 200 via an IPO, but for now it continues to climb up the list, cracking the top 20 after moving six spots to number 19. In March, Rover acquired DogVacay, its biggest competitor in the online dog-sitting marketplace. Since then it has been moving up our charts.

Rover started as a fun project born at a Startup Weekend event but has turned into a potential billion-dollar company. Last year it raised a $40 million in a Series E round, bringing the company to total funding to date for Rover to $91.5 million. Today its employee count, according to LinkedIn, sits at 230, up from 170 at the time of the big funding round last October. 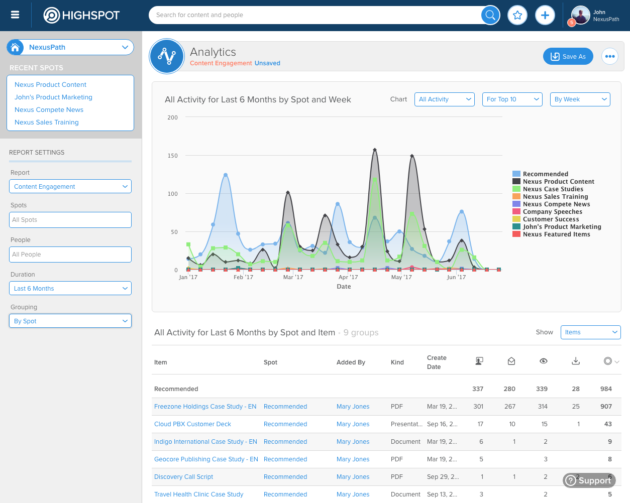 Seattle startup Highspot just completed a $15 million fundraising round this month, and it is up 10 spots to number 126 on the GeekWire 200.

The company is working on artificial intelligence models to predict which pieces of content will be most effective for pitching customers on products or services, and also help managers understand which content strategies aren’t paying off. With this new funding round, Highspot plans to scale up these AI products and strengthen its engineering, marketing, and sales departments.

School may be out for summer but that hasn’t slowed down Portland-based Lumen Learning, which rose 10 spots on the list to number 165. In April, the company announced a $3.75 million Series A investment round and a new partnership with Follett to expand the distribution of its open digital education course materials.

Founded in 2012 by Kim Thanos and David Wiley, Lumen Learning helps students at more than 100 institutions save on traditional textbook costs by offering open education resources (OER) for popular college courses. OER are available under public domain or have been released under a copyright license and include full courses, course materials, videos, tests, and more.

Nine startups made their debut on the GeekWire 200 or returned to the list in June. They are: Outdoor Project, Resin.io, VIAR, Code Fellows, FanWide, Rival IQ, Amplero, DefenseStorm and Human.