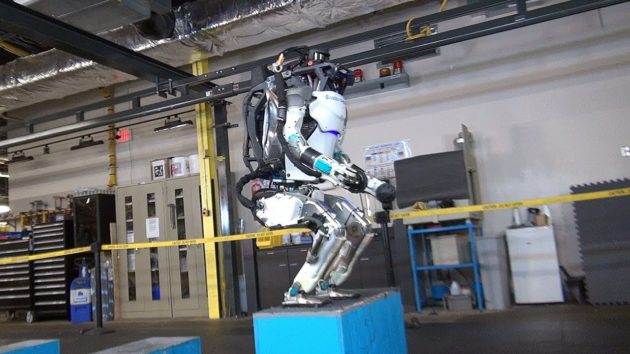 Boston Dynamics’ video of a humanoid robot executing a perfect backflip sparked a lot of dark humor, and now billionaire Elon Musk has responded with dark seriousness about the risks posed by super-intelligent, super-agile bots.

Musk suggested that future robots could move so fast they could match the fictional Flash, who eludes his comic-book foes by moving too fast for the eye to see. Compared to that superpower, doing human-level backflips is “nothing,” Musk said in a tweet:

This is nothing. In a few years, that bot will move so fast you’ll need a strobe light to see it. Sweet dreams… https://t.co/0MYNixQXMw

Then Musk added a bit of explanation for those who didn’t see where he was going:

How would a strobe light help see anything?

Otherwise you’d only see a blur

The agility of Boston Dynamics’ Atlas robot gave Musk another opportunity to touch on a theme he’s been emphasizing for months: that the potential risks posed by the rapid rise of artificial intelligence are so great that a regulatory regime is needed:

Got to regulate AI/robotics like we do food, drugs, aircraft & cars. Public risks require public oversight. Getting rid of the FAA wdn’t make flying safer. They’re there for good reason.https://t.co/6OXZC3UdMW

Time and place to regulate. A little too early today but will eventually be needed. Today I worry far more about state actors and criminals using AI for cyber attacks

Musk himself is heavily involved on the frontiers of artificial intelligence, not only through commercial ventures such as Tesla (which enlists machine learning for its self-driving Autopilot platform) and Neuralink (which is working on brain-computer interfaces), but also through his backing for efforts such as OpenAI and the Future of Life Institute.

This summer he traded zingers with Facebook founder Mark Zuckerberg over AI’s risks vs. benefits. Will this latest Twitter exchange raise the issue’s profile, or will it continue to be an issue primarily of concern to geeks rather than policymakers? Maybe someone should form an AI political action committee … before the robots beat us to it.