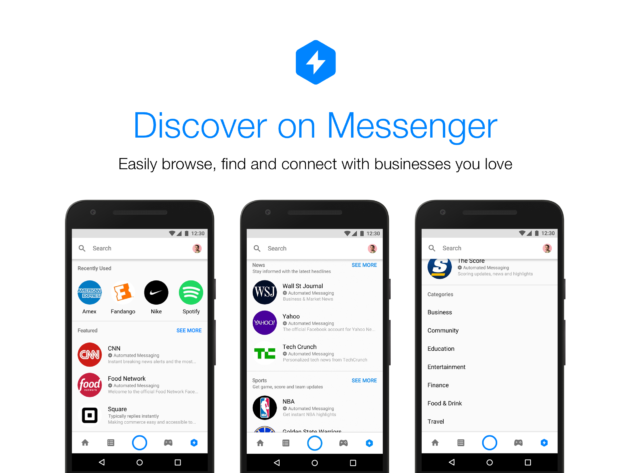 Facebook has been heavily promoting ways to bring companies into Messenger conversations, with groups like Subway and the Golden State Warriors already on board, and now the social media giant is launching a new section for users to connect with their favorite bots.

Previously announced at Facebook’s F8 conference in April, the Messenger Discover tab is live for all U.S. users as of today. Discover lets people search for their favorite businesses, or look through categories and see which bots are popular at the moment. The Messenger home screen also now contains a section dedicated to bots, including previously used bots, search tools and popular experiences.

At F8, Facebook’s Vice President of Messenger David Marcus said the ability to browse bots gives Messenger a chance to become “the yellow pages of messaging.” There are more than 100,000 monthly active Facebook Messenger bots out there right now hoping to reach the more than 1.2 billion monthly active users on the messaging platform.

As Messenger continues to grow as a platform of its own, Facebook has been adding more features beyond chats. Another new feature announced at F8 called Chat Extensions lets users create shopping lists, order food, split payments and share music, among other things, all within a conversation on Messenger. Marcus showed off an example by dropping a song into a conversation using Spotify’s chat extension.