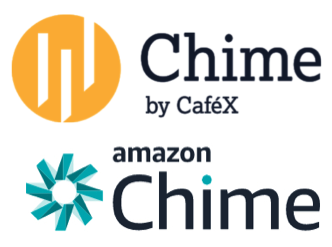 A New York-based tech company has filed a federal trademark suit against Amazon Web Services over the name of the cloud giant’s newly launched Chime online conferencing and collaboration technology.

CafeX Communications launched its online conferencing and collaboration system, called Chime, a year ago. Using the application, businesses can collaborate via document sharing, chat, video and voice calls directly from their chosen browser. The company won best in show for the technology at the Enterprise Connect 2016 conference in March, nearly a year before Amazon launched its own Chime online conferencing technology.

In the lawsuit, CafeX alleges Amazon was aware of its Chime product when it launched Amazon Chime last week. The company asserts that an Amazon Web Services product manager visited CafeX’s booth promoting Chime at the Enterprise Connect conference, where the CafeX Chime product was heavily promoted throughout the venue.

GeekWire has contacted Amazon for comment on the suit and will update this post with any response from the company.

CafeX says in the suit that its trademark application for CafeX Chime “has been published and formally allowed and is expected to issue shortly.” The company initially posted this on Twitter after Amazon made the announcement.

In addition to sharing a name, both products offer similar features, as web-based collaboration and interactive meeting services for businesses.

Both are marketed with similar language, as well. Here’s how CafeX describes its product: “Chime provides a simpler way for people to collaborate via web, voice and video conferencing. Join meetings securely with one click from any web browser.”

Here’s Amazon Web Services’ language: “Use one application to conduct online meetings, video conferencing, chat, screen sharing, and file sharing, both inside and outside your organization. You don’t need to switch between applications to collaborate. Instantly go from a chat to a call, share your screen, and even invite more people, with a simple click or tap, all in the same application.”

The suit also says that CafeX sometimes uses a blue version of its Chime logo, similar to the color of Amazon’s Chime logo.

CafeX said in the lawsuit that its company has already suffered in wake of Amazon’s Chime announcement last week: “CafeX has received numerous communications from confused third parties, including queries regarding whether Amazon’s product uses CafeX’s CHIME technology and annoyed business partners confused into believing incorrectly that CafeX chose to partner with AWS rather than with them to market and sell CafeX’s CHIME product and service,” the lawsuit reads.

Both companies are signed up to exhibit at the 2017 Enterprise Connect show, where they will be touting their respective Chime products, the suit says. Their displays, according to CafeX, will be two booths away from each other.

“Thus, in a matter of weeks, at the industry’s most significant trade show of the year, the same trade show where one year ago CafeX won Best of Enterprise Connect for its CHIME-branded technology and where thousands of potential customers and business partners will be in attendance, AWS will be promoting its competing and infringing CHIME-branded technology just 30 feet away.”

CafeX is seeking unspecified financial damages in the suit, in addition to asking the court to prohibit Amazon’s use of the Chime trademark.