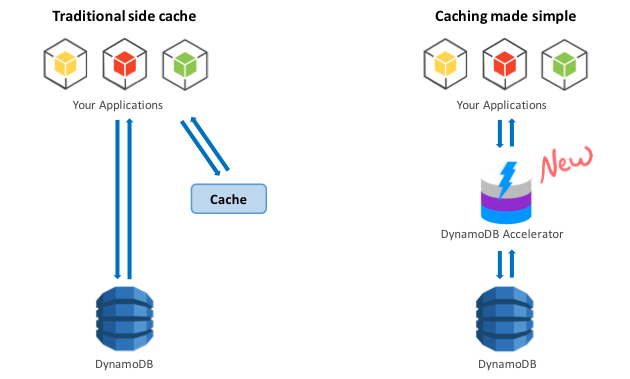 DynamoDB Accelerator, or what the company is calling DAX, allows customers of AWS’ flagship DynamoDB database to sharply improve performance on certain kinds of database queries, especially ones in which an application needs to read a lot of data right now, not milliseconds later. Customers like Tinder and Expedia have been using the preview version, according to AWS, and Vogels identified ad-tech companies as another group that could use this level of performance.

DAX speeds up performance by adding a cache of specific data that an application can access without having to go all the way to the database itself, and it can handle millions of simultaneous queries while delivering answers in microseconds, Vogels wrote in a blog post. Caching is a pretty basic step for improving database performance, but a lot of companies don’t need that level of performance when they first build their applications, only to realize much later they’ll need to rewrite their application to implement a cache, he said.

DAX is another service from AWS that users can turn on from their AWS dashboards, and it requires a mere tweak to an application to understand the DAX cache is present as opposed to a wholesale rewrite of the way your application writes and reads to its database.

“Caches reduce latencies to microseconds, increases throughput, and in many cases, help customers save money by reducing the amount of resources they have to overprovision for their databases,” Vogels wrote.

Database competition between the big cloud providers has heated up in 2017, as they court larger and larger enterprise companies with more complex requirements than the startups that turned AWS into a household name, in techie households anyway.

Last month Microsoft introduced a new database called Cosmos DB that is focused on speed and reliability, and Google Cloud Spanner went from a preview to a generally available product in a short amount of time earlier this year. Meanwhile, all cloud vendors are eyeing Oracle’s database customers as potential users of their improved cloud database services while Oracle tries to fight back with its own cloud services.