Part of Amazon’s strategy to get Alexa everywhere in the world is to encourage entrepreneurs to test the boundaries of what’s possible with its voice technology platform.

That’s exactly what happened over the past 13 weeks in Seattle, where Amazon teamed up with Techstars to operate the first-ever Alexa Accelerator.

On Tuesday the program culminated with a Demo Night at the Museum of History and Industry in Seattle’s South Lake Union neighborhood.

Rohit Prasad, vice president and head scientist for the Amazon Alexa team — which has grown to 5,000 employees — gave an opening keynote before each startup pitched their ideas to a crowd of investors, entrepreneurs, and others from the community.

We will see many different kinds of technologies emerge and many different use cases of conversational AI. But as we say at Amazon, it is still Day 1.
Prasad talked about the complexity of Alexa’s technology — “while it seems simple, it is incredibly hard to make it work,” he noted — but also showed how there are seemingly-infinite opportunities for engineers and entrepreneurs to tackle on this nascent platform.

“When I walk through the floor here and see what you all are doing, it’s incredibly exciting,” Prasad told the crowd. “We will see many different kinds of technologies emerge and many different use cases of conversational AI. But as we say at Amazon, it is still Day 1.”

Alexa powers Amazon’s Echo smart devices, and can be integrated into other third-party devices. Both the Alexa virtual assistant and Echo devices are two of the company’s most successful products. Amazon is battling other tech giants like Google, Microsoft, and Apple in the competitive voice assistant market, though it has a big lead as the first mover. A recent forecast from eMarketer estimates that Amazon will have a 71 percent market share of all voice-enabled speakers in the U.S. this year.

The accelerator is part of Amazon’s $100 million Alexa Fund, which launched in 2015 and is used by Amazon to invest in companies that will push the boundaries of voice-based interaction. The tech giant has already invested in more than 30 startups as part of the fund.

Amazon and Techstars, which also runs a separate Seattle accelerator program, invested an initial $20,000 in each participating company for 6 percent common stock, with potential for an additional $100,000 convertible note.

The nine companies worked closely with Amazon over the past 13 weeks and had access to the technology behind services like Alexa Skills Kit, Alexa Voice Services, Amazon Web Services and Amazon Launchpad. Here are the startups:

Aviel Ginzburg, managing director of the accelerator, told GeekWire that the companies are pushing boundaries for what’s possible with voice technology and ambient user interaction.

“The space is incredibly new and unquestionably in its infancy, but every company in our program sees the opportunity and is pulling the future back in time to the present,” he noted.

Ginzburg, who co-founded Seattle startup Simply Measured, added that “voice has been the missing ingredient to delivering products and experiences that let humans and machines interact in the most natural and convenient ways.”

“When you type or tap, the burden of translation is on you — when you talk, it’s on the machine,” he explained. “Shedding that cognitive burden is a foundational shift in the way we leverage technology. We certainly have a long way to go toward making those experiences as delightful and profound as they need to be, but we’re well on our way and Amazon is leading the charge.”

You may notice below that all nine CEOs in the cohort who pitched on Tuesday are male. That’s noteworthy in regard to Techstars Seattle — which runs separately from the Alexa Accelerator — and its commitment to gender equity.

Here’s a rundown of our three favorite pitches from Tuesday night, along with more info about all the startups below.

Voice technology could play a big role in encouraging more kids to read and Novel Effect is going after the opportunity to make it happen.

The Seattle startup has built voice recognition technology that adds music, sound effects, and other audio features to the book reading experience.

Hammersley’s pitch was sharp and explained how Novel Effect’s products can be used by both parents in the house and teachers in the classroom. He showed how Alexa can work with Novel Effect, queuing music and sound effects after hearing words read from a given book.

I liked how Hammersley outlined the addressable market — 26 million U.S. households — and noted that the company already has contracts with large publishers. And his final slide, which teased Novel Effect’s appearance on Shark Tank later this month, was icing on the cake.

New apps, games, and devices don’t typically encourage people to get active — especially kids who are often glued to their smartphones and tablets.

Play Impossible is looking to change that with its connected ball that bridges “the very best in digital with the very best in physical,” as CEO Brian Monnin explained during his pitch.

The company’s inflatable ball, which sells for $99 at Target and Amazon.com, links to a smartphone app and lets people play different physical games. The ball also connects to Amazon’s Fire TV — “we turn your favorite rooms into activity centers all winter long,” Monnin noted.

Monnin, who talked about his company at the GeekWire Summit earlier this month, gave a convincing pitch that focused on using technology and video games to help kids stay healthy.

“These games are designed to get you moving,” Monnin said.

There certainly seems to be a lot of opportunity to combine voice and games — another startup in the Alexa Accelerator, Sensible Object, is doing something similar.

I wasn’t sure if Jamie Brew was doing a comedy show or a startup pitch, but I loved it regardless.

Brew is the co-founder of Botnik Studios, a new startup that combines machine learning with human intellect to create written content for jokes, scripts, music, and more. Its software suggests words based on specific styles of vocabulary and prose; the idea is to help writers quickly generate creative ideas.

This summer the startup built its first prototype and used the technology to write an parody episode of Seinfeld; the script went viral on Twitter.

Botnik worked with writers from Amazon to bring its content to Alexa, but it’s a little unclear how that will work, and how Botnik will build a business with this idea.

Regardless, Brew had the most memorable pitch of the night, which is worth something. It was a good reminder that making people laugh can go a long way, and that CEOs shouldn’t take themselves so seriously.

Brew ended the pitch with a quote from Amazon CEO Jeff Bezos created in Botnik using recent shareholder letters written by Bezos. “When I read that quote, it changed my life,” Brew said as the crowd chuckled. “And at Botnik we hope can change a few lives, too.” 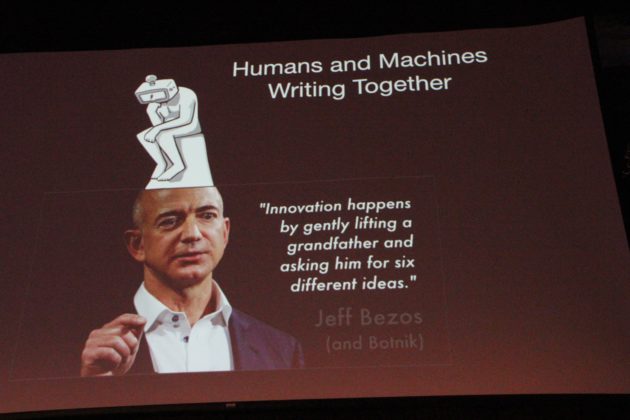 Learn more about the other companies below.

Comet is building a GitHub-like management system for machine learning