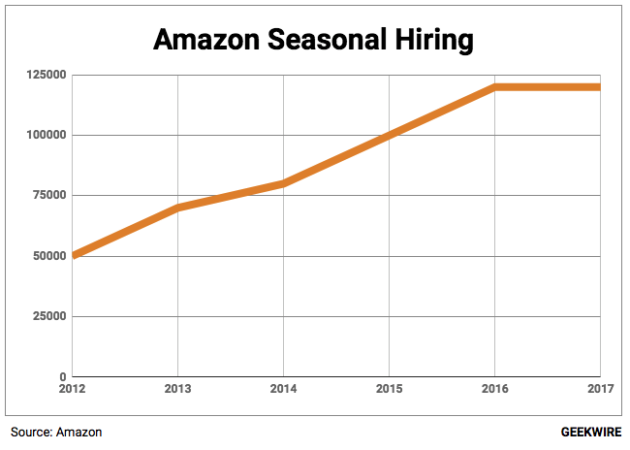 Amazon says it plans to hire more than 120,000 seasonal workers at its U.S. fulfillment centers, sortation centers and customer service sites this holiday season, supplementing the workforce of full-time employees at the company’s facilities across the country.

The number is the same as the prior year for the first time since Amazon started reporting its holiday hiring plans publicly five years ago. We’ve asked the company about the reason for the hiring plateau, and we’ll update this post with any information we receive from the company.

The annual announcement is has become a traditional prelude to the holiday shopping season, closely watched as a barometer of Amazon’s most important quarter. The holiday season is Amazon’s “Super Bowl,” as Greg Zielinski, head of Amazon’s fulfillment center in Dupont, Wash., told GeekWire last year in this video, which also provides a peek into the facility and its advanced robotics.

The company says 90 percent of people working in its U.S. fulfillment centers are regular, full-time employees, when calculated as an average for the entire year. That is the same ratio of regular employees to seasonal workers as the company reported in past years.

“We prepare year round for the holidays and we’re excited to hire for over 120,000 positions this season to help delight our customers,” said Dave Clark, senior vice president of Amazon’s global customer fulfillment. “We look forward to welcoming back holiday employees who return year-after-year to Amazon and welcome new faces to the team, many of whom will continue on with regular, full-time roles with the company after the holidays.”

The company’s overall global employment is more than 380,000 people, which also includes its Seattle headquarters, worldwide operations and other employees in addition to its fulfillment network. The company is seeking a second U.S. headquarters where it plans to hire up to 50,000 people.

Amazon lists 33 states where it’s hiring seasonal workers, up from 27 a year ago.