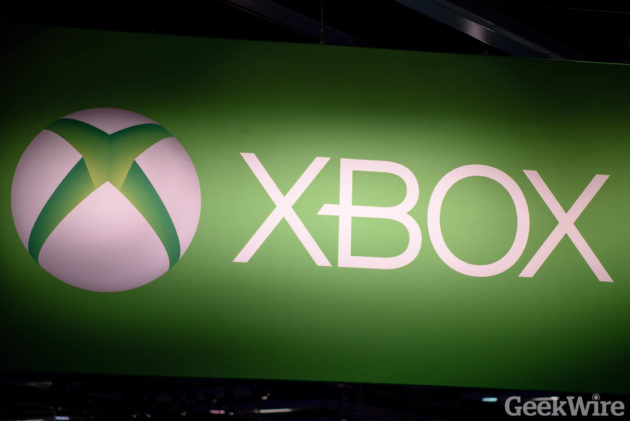 That’s true, when comparing the result to the previous year. But a closer look at the numbers shows that Xbox Live usage actually declined by 2 million users sequentially — from 49 million users in the June quarter of this year to 47 million in the September quarter. That contrasts with an increase of 2 million Xbox Live active users, from 37 million to 39 million, between the June and September quarters of 2015. 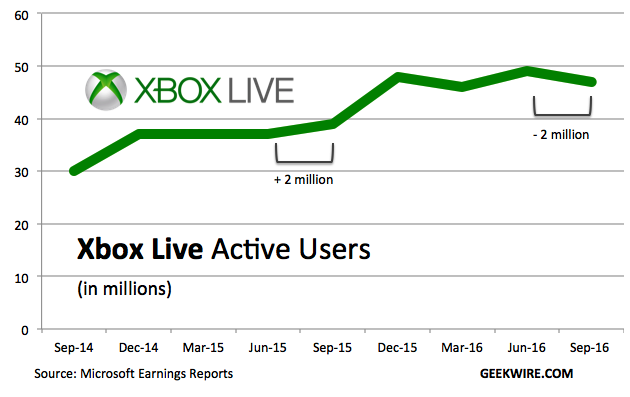 So what’s going on? First of all, Xbox Live usage varies throughout the year based on factors including new console sales and the release of blockbuster games that leverage the Xbox Live multiplayer system.

Given the inherent seasonality of the games business, Microsoft says year-over-year comparisons are a more accurate way to measure results, rather than month-over-month or quarter-over-quarter. (Microsoft defines Xbox Live monthly active users as users, paying or non-paying, who have signed on to Xbox Live in the past month across any device.)

Michael Pachter, a video game analyst with Wedbush Securities, said it’s too early to draw conclusions based on the available data. “It’s just a seasonal thing, they haven’t reported this consistently nor long enough to figure out seasonality,” he said via email. “There were more big games last year than this year in the summer months.”

But the real test is about to begin. The holidays are the critical season for the video game industry. Microsoft set a high bar last year, reporting a year-over-year increase of 28 percent in Xbox Live active users for the December quarter of 2015 — up 9 million users from the same period a year earlier.

That resulted in part from the release of “Halo 5: Guardians” in October 2015, the latest installment in Microsoft’s blockbuster game franchise. This quarter, Xbox Live should benefit from big games such as “Gears of War 4 and “Titanfall 2,” but without a big new Halo game for the holidays, it could be challenging for Microsoft to match last year’s big gain.

Another factor will be holiday sales of new Xbox One consoles, as users unwrap their gifts and log on to Xbox Live. On that front, the Xbox One ousted Sony’s Playstation 4 to lead U.S. console sales over the past three months — a battle that Sony has typically won over the past two years.

Big thanks for making @xbox best selling US console 3rd month in a row from @npdgroup. 1st time this gen we have won 3 consecutive months! ?

Microsoft’s U.S. console sales spike is due in part the Xbox One S, which went on sale in August, helping Microsoft recover from its early Xbox One struggles.

However, as part of its latest earnings report, Microsoft said overall gaming revenue dropped by 5 percent to $2.1 billion, compared to the prior year, citing lower console prices and fewer units sold. Microsoft CFO Amy Hood said the company expects gaming revenue to drop again this quarter, for the same reasons. But she added that Microsoft expects “continued active engagement growth on our gaming platform given the holiday season.”

Sony, meanwhile, reported 60 million active PlayStation users as of June, with around one third paying for a PlayStation Plus subscription.

Xbox is a big business for Microsoft from a financial perspective. Gaming revenue made up around 10 percent of the company’s $22.3 billion in total revenue in the recent quarter.

But Nadella points out that Xbox contributes to the company in other ways, as well. The Microsoft CEO talked about Xbox when asked about Microsoft’s brand image this week. He described a photo that Microsoft employees use internally for motivation: Someone walking out of a store with an Xbox console, hugging it. “To me, that’s a fan of Xbox,” Nadella said.

Asked if it bothers him that Microsoft’s brand isn’t as well-known to younger consumers as Apple, Facebook, Google, or Amazon might be, Nadella pointed to two platforms within Microsoft.

“They’ll know Minecraft; they’ll know Xbox,” he said. “To me, having a set of brands and set of products for that demographic and especially kids and college students — it’s super important to us.”