Microsoft today unveiled new game streaming technology that puts it in direct competition with Amazon and shows the fruits of an acquisition the company made earlier this year.

At a Windows Creator event today in New York City, the Redmond tech giant debuted new capabilities for Windows 10 and Xbox One that incorporate technology from Beam, the startup Microsoft acquired in August.

Beam, previously a member of Techstars Seattle, lets gamers easily stream their gameplay to viewers. Microsoft’s new streaming product is also called Beam, and lets players stream games from within Windows 10 and Xbox One with just a click of a button on the new “Game Bar.” Microsoft is focusing on creating a seamless experience for interactions between gamers and viewers. 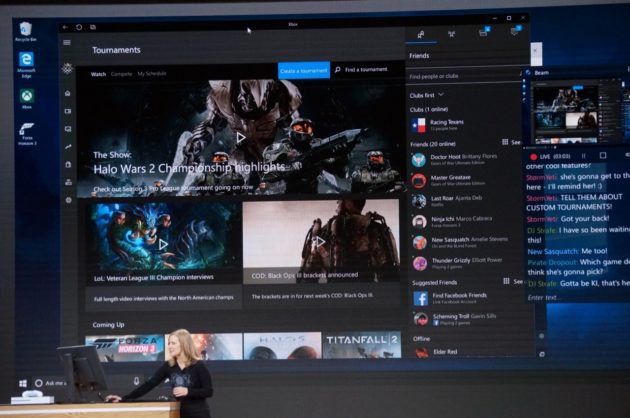 Beam is very much like Twitch, the game-streaming giant that Amazon acquired for $1 billion in 2014. Microsoft is certainly an underdog in the game-streaming space, but this is an interesting move given that it is building streaming capabilities directly within the company’s robust Xbox and Windows platforms.

Amazon, meanwhile, is starting to utilize its Twitch acquisition. The company last month unveiled its own new games that feature deep integration with Twitch, signaling Amazon’s continued investment in the gaming industry, as well as its ambitions for new verticals like eSports and live-streaming.

Microsoft also on Wednesday announced custom tournament capabilities on Xbox Live via the Arena platform for gamers using both consoles and PC.