SAN FRANCISCO — Microsoft will marry its newly acquired mobile development technology from Xamarin with its Visual Studio software development tools, expanding its offerings for developers who make apps for Android and iOS, in addition to Windows.

Microsoft says it will make Xamarin available at no extra charge for Visual Studio Enterprise and Professional users, and include Xamarin’s capabilities in Visual Studio Community. The company will also make Xamarin Studio for OS X available free. In addition, Microsoft said it plans to open-source the Xamarin SDK, including its runtime, libraries and command line tools, through the .NET Foundation “in the coming months.”

The news got big whoops and cheers from the developer audience at Build, illustrating the growing significance of cross-platform development for traditional Windows developers, particularly those focused on mobile platforms. Premium versions of Xamarin would normally cost as much as $2,000 a year.

“I like all this applause!” said Scott Guthrie, the company’s cloud computing chief, as he announced the news.

It’s the latest move by Microsoft to expand the reach of its developer tools even in cases where developers aren’t making apps for its own Windows operating system. The company’s ultimate goal is to get more companies and developers using its Azure cloud computing platform, where Microsoft is competing with strong rivals such as Google and Amazon Web Services. 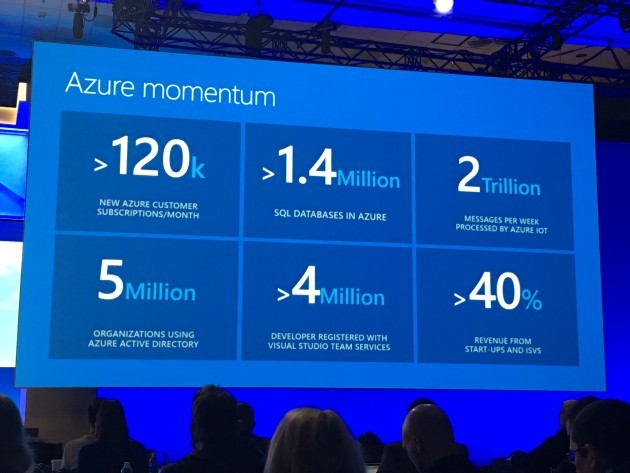 Guthrie called Xamarin “the perfect complement to a back-end cloud.”

Miguel de Icaza, the Xamarin co-founder and chief technology officer, gave a demonstration of Xamarin on stage, showing the ability to create and preview non-Windows apps on a Windows PC using Xamarin, without having to use another machine.

“This is great because you no longer have to invest in a chair that spins,” he joked.

De Icaza was also the creator of the Mono project, an open source implementation of Microsoft’s NET Framework, for building cross-platform software. In the past, when Microsoft was run by co-founder Bill Gates and former CEO Steve Ballmer, de Icaza struggled to get the software giant to acknowledge his work. At the company’s Professional Developers Conference in Los Angeles in 2005, for example, de Icaza was forced to hold sessions apart from the main Microsoft conference, at a nearby hotel.

Today it’s a different world, and a different approach under Microsoft CEO Satya Nadella. On stage at Build today, de Icaza said he was happy to be finally joining the team responsible for .NET, concluding what he described as the “longest job interview of my career.”