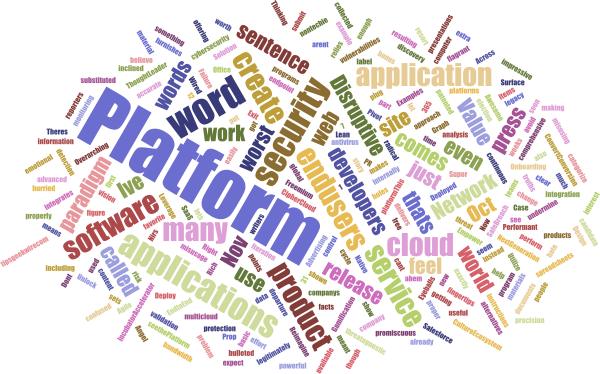 What it means: There is a clear and appropriate use for this word. A platform is a software-based product meant to help developers create applications. (Applications, also called programs, are the sets of instructions that let a computer perform useful work for end-users.)

The problem comes in the promiscuous and flagrant application (ahem) of this word to just about any software product.  For example, Salesforce can legitimately be called a platform, because it furnishes the materials for developers (and even trained non-techie end-users) to create applications. Despite Microsoft’s assertions to the contrary, by a properly narrow definition Office 365 is not a platform — it’s an application that lets end-users create work products including spreadsheets, documents, presentations and more, but not other applications.

In each of the bulleted items above, I believe “application,” “program” or “web site” could have been substituted for “platform,” resulting in a more accurate sentence. Many writers seem to feel those words aren’t powerful or impressive enough. Only “platform” will do.

Why it’s the worst: “Platform” is the word of first resort for too many PR people and even hurried, confused reporters when they can’t figure out how to categorize something. So many alternatives are available to avoid misusing this word: service, software, offering, product, web site. It’s worth the extra effort to label a product properly in the interest of precision.

I’ve got the emotional bandwidth to hate other words, so feel free to submit your favorite candidate to tips@geekwire.com. Don’t expect to see it here any time soon, though. There’s too much material I’ve already collected that’s making me seethe.