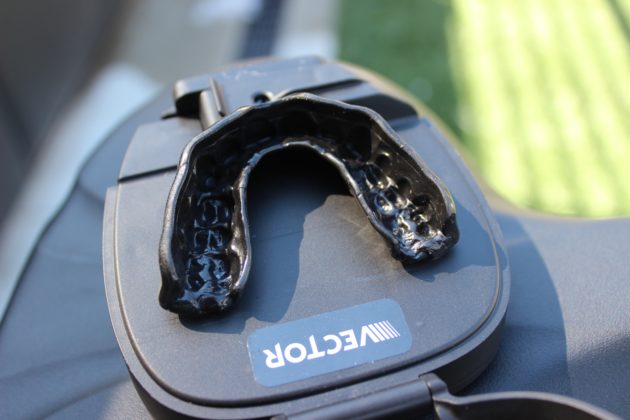 Can a mouthguard keep football players safe and reduce the amount of impact to their heads? The University of Washington is about to find out, with a little help from a nearby tech startup.

i1 Biometrics is a 20-person company headquartered in Kirkland, Wash., that has developed a sensor-infused mouthguard that can monitor linear and rotational impacts to the head in real-time.

The Huskies are testing the device this season during practice with 10 players from a variety of positions. GeekWire spent some time at Husky Stadium this week in Seattle and met with Rob Scheidegger, UW’s head football athletic trainer, to learn why the team is using the mouthguards.

“These sensors give us data on about what the actual skull is experiencing inside the helmet,” he said. “Research has shown it’s a little more accurate than a helmet sensor.”

Since the mouthguard is connected to a player’s upper teeth, it provides a more accurate assessment of head impacts, explained i1 Biometrics sales manager Andrew Golden. 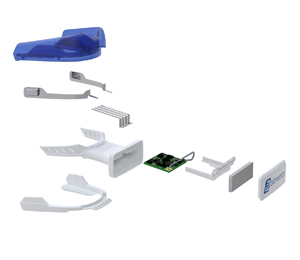 “We are inside the athlete’s head,” he said. “Other sensors outside the mouth are moving independently of the skull.”

The device looks similar to the traditional mouthguard, but the inside is packed with microprocessors, capacitive sensors, gyroscopes, accelerometers, memory storage, and a battery.

“Think of it like a smartphone for your mouth,” explained Golden.

The mouthguard, which can store up to 1,000 impacts on one charge, relays data wirelessly in real-time via an antenna on a secure frequency to i1’s software platform, the “Impact Intelligence System.” Trainers use this information to see exactly when and where an impact to the head occurred, and perhaps more importantly, how much g-force the player experienced. They can set specific thresholds and get notified if a player takes a hit that crosses a certain g-force limit. 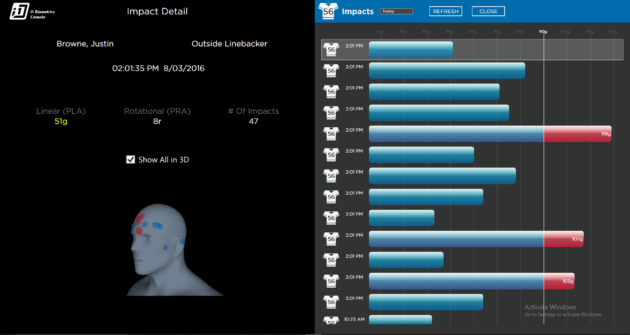 Scheidegger said the team is still very much in experimental mode and figuring out how exactly to use the mouthguard data most effectively. One benefit is being able to monitor head impacts of each player, without watching every second of action during practice.

“It’s like an extra set of eyes on the field that can give us real-time information about what’s going on,” he said.

Lots of teams are trying to reduce the amount of head impact players take during practice — for example, the NFL’s Pittsburgh Steelers are using robotic dummies to reduce injury.

Another potential benefit of the mouthguard data is figuring out which drills are causing the most impact. Trainers can sift through the data and match it to recorded video of a given practice. Coaches could then potentially tweak their practice regime to help reduce those collisions.

“We can identify high-risk drills, or different sections of practice that might be harder on our guys as far as taking hits to the head,” Scheidegger said.

The Huskies also promote rugby-style tackling, which takes the head out of tackling as much as possible. The mouthguard data can be used to help create teachable moments about this technique, Scheidegger noted.

“We can give an athlete real data that shows one impact where he used his head to tackle, and another where he used proper technique,” he said. “That’s opposed to just telling them and taking our word for it. Now we can say, ‘look at the data.'”

Golden made it clear that the mouthguard is not a diagnostic tool — it can’t tell you if a player has a concussion or not. But it can give teams more reasons to perform a concussion evaluation, for example.

“We can give you objective information that you wouldn’t normally see,” he noted.

Scheidegger explained that there isn’t much research linking specific hits to incidents of injury, or that shows how several small impacts lead to head trauma. The UW is using i1’s technology as a way to collect as much data as it can, and then match it to what happened. The idea is to not only assess impacts that may signal a potential concussion in real time, but to try and decipher the cause-and-effect of each impact, and make any necessary changes thereafter. 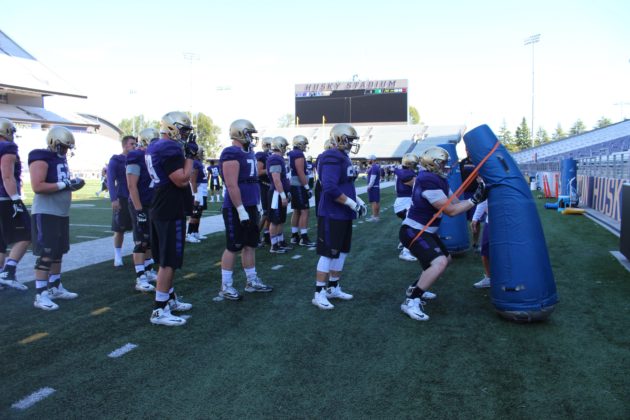 The UW, one of 25 teams that have tried the i1 Biometrics mouthguard, is testing other innovative solutions to help protect players, too. Another local startup, Vicis, is equipping the team with high-tech helmets that it says provides more protection against skull fracture, traumatic brain injury, and concussion than the traditional helmet used by athletes today.

However, Vicis on Wednesday pulled its helmets from the UW, citing the need to improve comfort and fit for players. That speaks to the balance of introducing new products and technology, while also making sure it doesn’t get in the way of player performance. i1 Biometrics said it lets players go through the exact same fitting process — boil and bite — as a traditional mouthguard.

“We try to find guys willing to experiment with new things, but we also don’t want to force our guys to do stuff that will take them out of their game or interrupt their practice and preparation for the season,” Scheidegger said.

Scheidegger noted that the Huskies are fortunate not only to be surrounded by one of the nation’s top research universities with plenty of experts in the athletic training field, but also in Seattle, where startups like i1 Biometrics and Vicis are a stone’s throw away. The proximity makes it easier for the UW to test new solutions and help improve player safety.

“We’re in a city that is always at the forefront of technology,” he said. “We are lucky to be in this area with really smart people working on solutions to these problems.”

i1 Biometrics: A brief history

The initial technology behind i1 Biometrics was actually first developed by a company called Bite Tech, which creates mouthguards for Under Armour. Bite Tech spun out i1 Biometrics in 2012 to create a mouthguard equipped with impact sensors, and in 2014, Seattle-area angel investor and entrepreneur Gary Rubens acquired the company.

“I wanted to invest in wearable technology that could provide insights into athletes performance and safety,” Rubens told GeekWire. “I had heard about i1 Biometrics through a friend who had worked on the product and I quickly learned that this Vector Mouthguard and i1 Data Analytics platform could be the most accurate product on the market, provide coaches with valuable information for decision making, and possibly save lives as well.”

Rubens is chairman and advises the startup, while veteran medical technology executive Jesse Harper handles much of the day-to-day work at i1 Biometrics as CEO and president. Harper, who joined i1 Biometrics in 2014, told GeekWire that while the company started with mouthguards, it has a vision much larger than that.

The startup made a key acquisition last year, swooping up Shockbox, a competitor that developed a helmet sensor which measures impact to the head. This expanded i1’s portfolio to include athletes competing in sports that don’t use mouthguards, like BMX, skiing, and others.

Harper said that the larger vision is to create a full back-end software platform that pulls in data from a variety of sensors — even those that track nutrition and sleep habits — to ultimately provide coaches, trainers, and athletes with real insight to help improve performance and safety.

“We are now poised for another point of evolution,” he said of the company.

Harper said that the idea of using sensors to measure athletic performance and health is still relatively new to most teams and athletes, even though the technology has been around for decades. He said one key strategic move from i1 Biometrics was to create “coachable moments” to help coaches better understand why tracking player movement and impact can help teams, at the end of the day, win more games.

“We showed them that they can identify players who are dropping their heads too much in the fourth quarter because they are fatigued, or a practice drill that enables greater head impact exposure,” Harper explained. “It’s an opportunity to let coaches do what they do best: train athletes and get them doing things the proper way to mitigate risk.”

He added that “no team wants to be first” to try out new technology, and i1 Biometrics spends a lot of time getting people to understand the value of its product. Harper said the key is to provide actionable data that coaches can use to make effective changes.