Hundreds of employees, VIPs and would-be spacefliers gathered for the craft’s official rollout at the Final Assembly, Integration and Test Hangar, or FAITH, here at the Mojave Air and Space Port. And although British theoretical physicist Stephen Hawking couldn’t attend the ceremony in person, he read out the rocket plane’s new name in an audio clip.

Space exploration has already been a great unifier.

“We are entering a new space age, and I hope this will help to create a new unity,” said Hawking, who has been guaranteed a free spaceflight if he’s up to it when VSS Unity enters service. “Space exploration has already been a great unifier. We seem able to cooperate between nations in space, in a way we can only envy on Earth.”

Then Virgin Galactic’s founder, British billionaire Richard Branson, arranged for the official christening to be done by his granddaughter, Eva Deia, who was born exactly one year ago today.

“I’m pretty sure a 1-year-old has never christened a spaceship before, so we really are in virgin territory,” Branson quipped. “Today seems to the right time to change that, as we after all are celebrating the birth of two gorgeous ladies.”

Branson said it was more appropriate for an infant to christen the craft with a milk bottle than with a Champagne bottle, even though Champagne wine “never did me any harm.” With an assist from her mom and dad, Eva Deia broke the bottle over Unity’s nose.

Far from crying over spilt milk, Branson topped off the celebration by bringing soprano and would-be Virgin Galactic spaceflier Sarah Brightman up to the dais to lead the crowd in a chorus of “Happy Birthday” for Eva Deia.

Virgin Galactic and its manufacturing operation, The Spaceship Company, have been working on VSS Unity since well before the first SpaceShipTwo, known as VSS Enterprise, was lost during a rocket-powered test flight in October 2014. Co-pilot Michael Alsbury was killed in the breakup. Pilot Pete Siebold was injured as he was thrown clear of the disintegrating craft for a parachute descent.

Investigators determined that the plane broke up due to aerodynamic stresses when Alsbury unlocked a wing-pivoting brake system prematurely. The National Transportation Safety Board also pointed out shortcomings in SpaceShipTwo’s safety systems and training procedures.

Virgin Galactic says those shortcomings have been addressed for the new rocket plane. For example, a mechanical pin assembly has been added to the controls to keep the wings from being unlocked at the wrong time. Some of the cockpit instruments have been redesigned, and pilot procedures have been changed to reduce the risk of making a wrong move.

Doug Shane, the president of The Spaceship Company, paid tribute to Alsbury during today’s ceremony. “Hardly a day goes by that I don’t think of Mike and his family,” he said. “I know he believed in this mission, and this technology, and this vehicle design. We’ve made this a better and safer system, because making a better and safer system was what Mike was all about.”

Other changes were made to improve SpaceShipTwo’s aerodynamics and streamline production, but for the most part, the second plane is a carbon copy of the first. “If you looked at Serial No. 1 and Serial No. 2 under the hood, you couldn’t tell the difference,” Shane told reporters before the rollout. 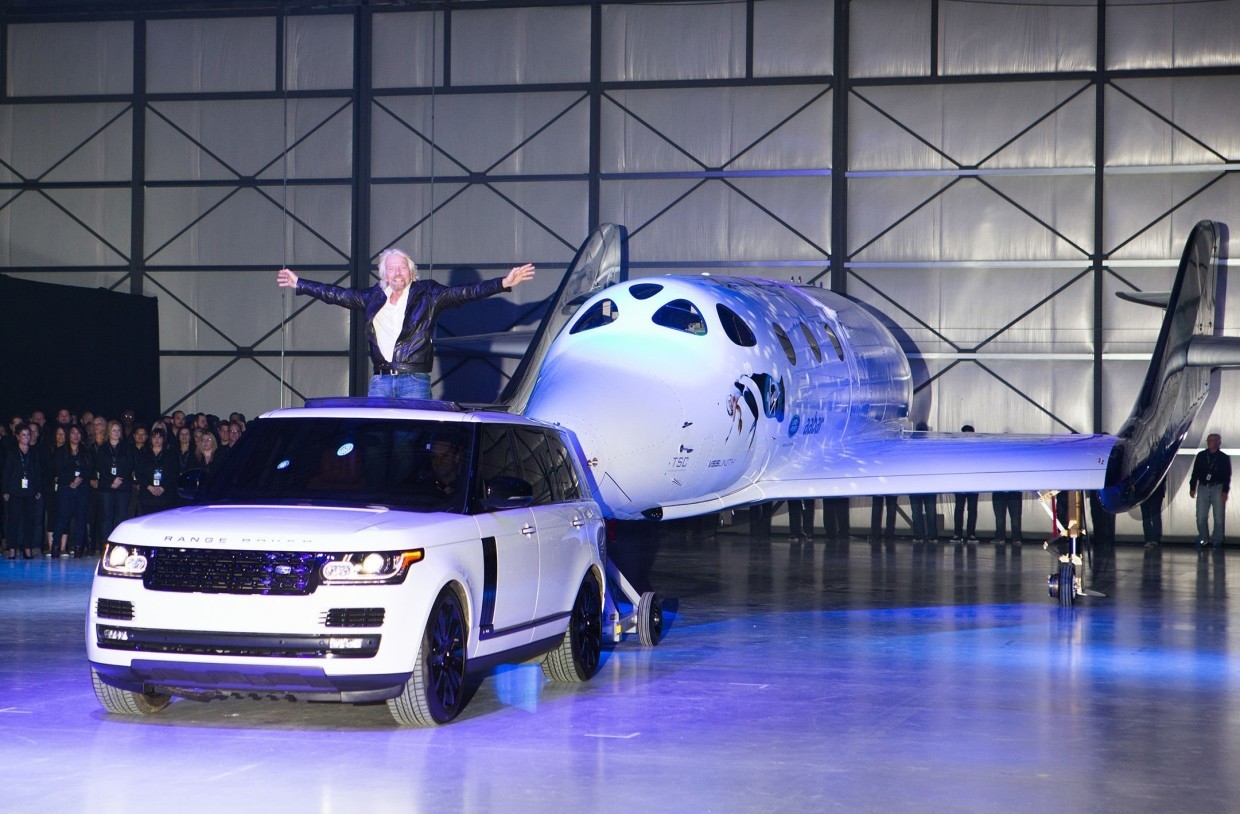 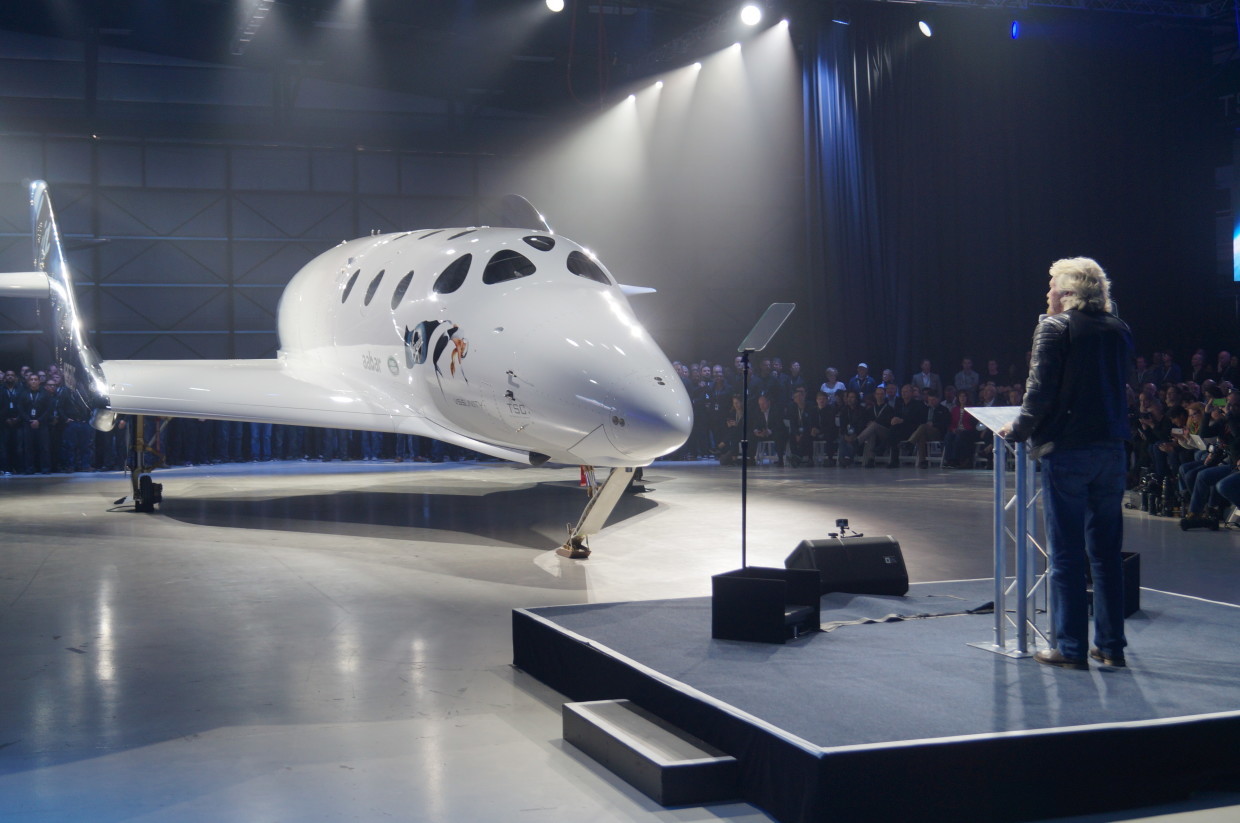 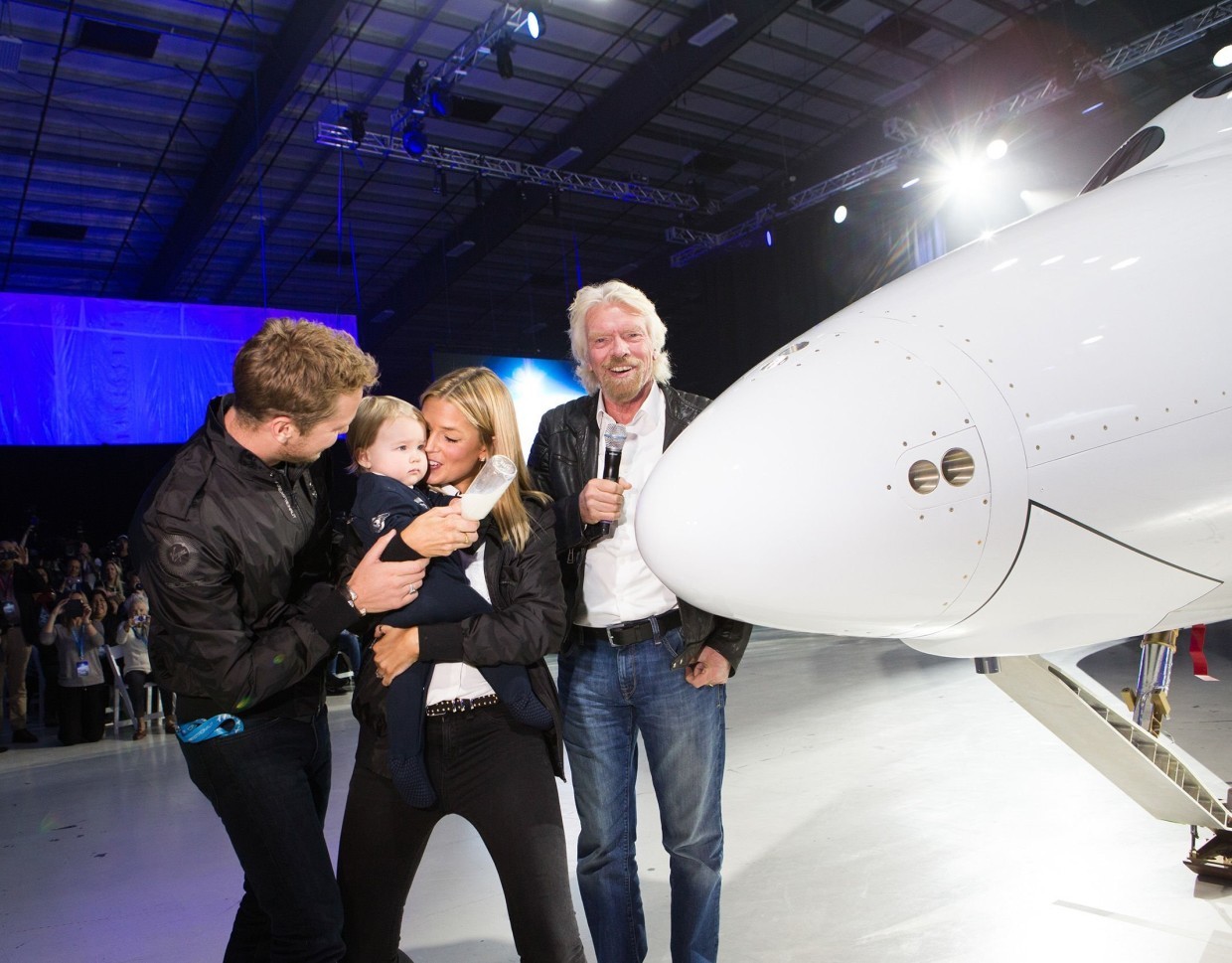 Richard Branson, his son Sam, his daughter-in-law Isabella and his granddaughter Eva Deia get ready to break a milk bottle over VSS Unity’s nose during its christening. (Virgin Galactic photo) 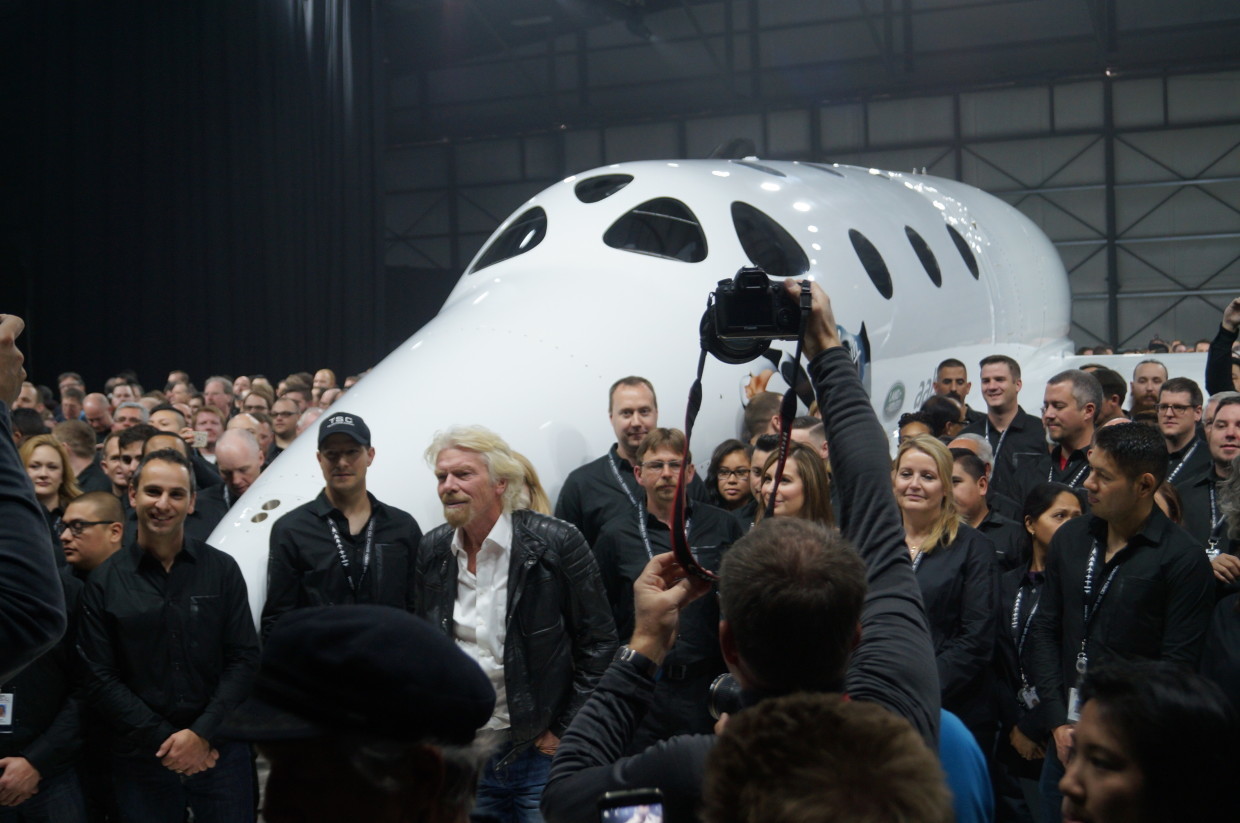 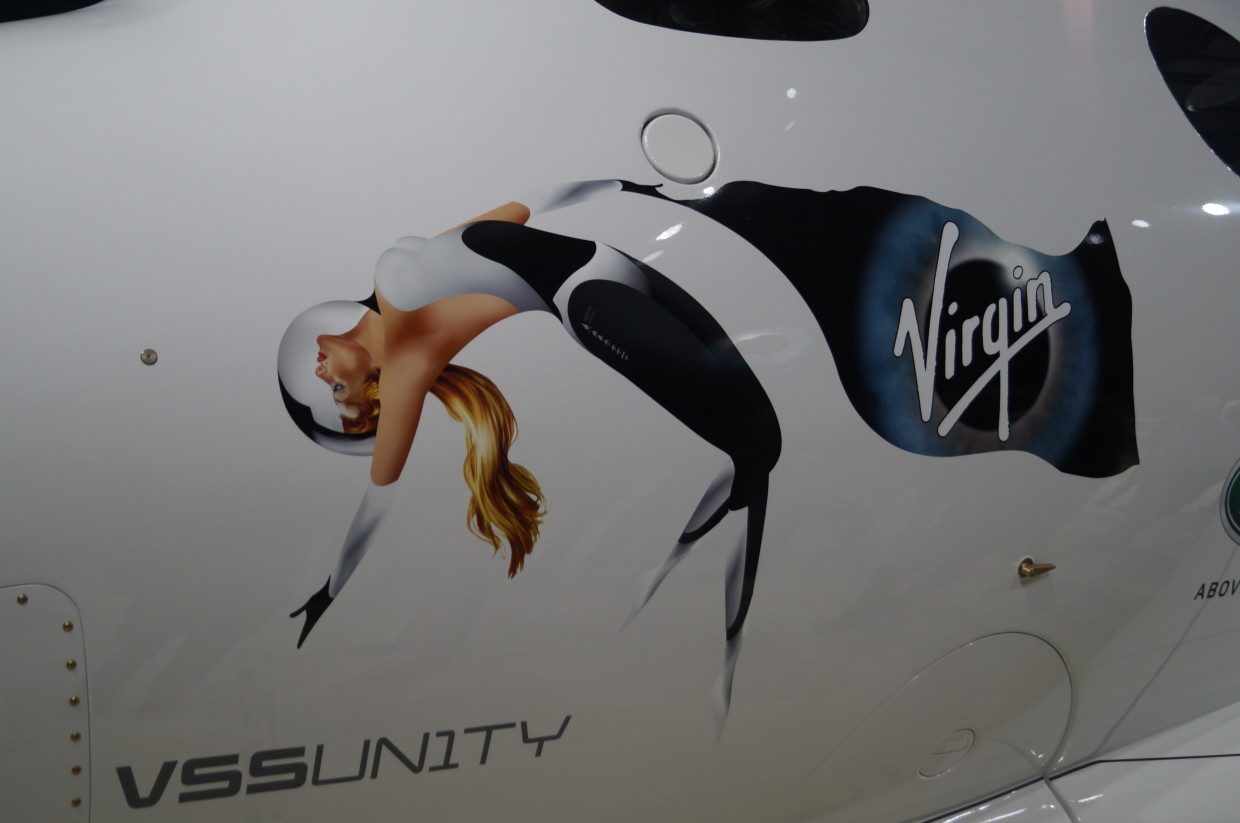 The zero-G mascot painted on the side of VSS Unity is modeled after Richard Branson’s mother, Eve. (GeekWire photo by Alan Boyle) 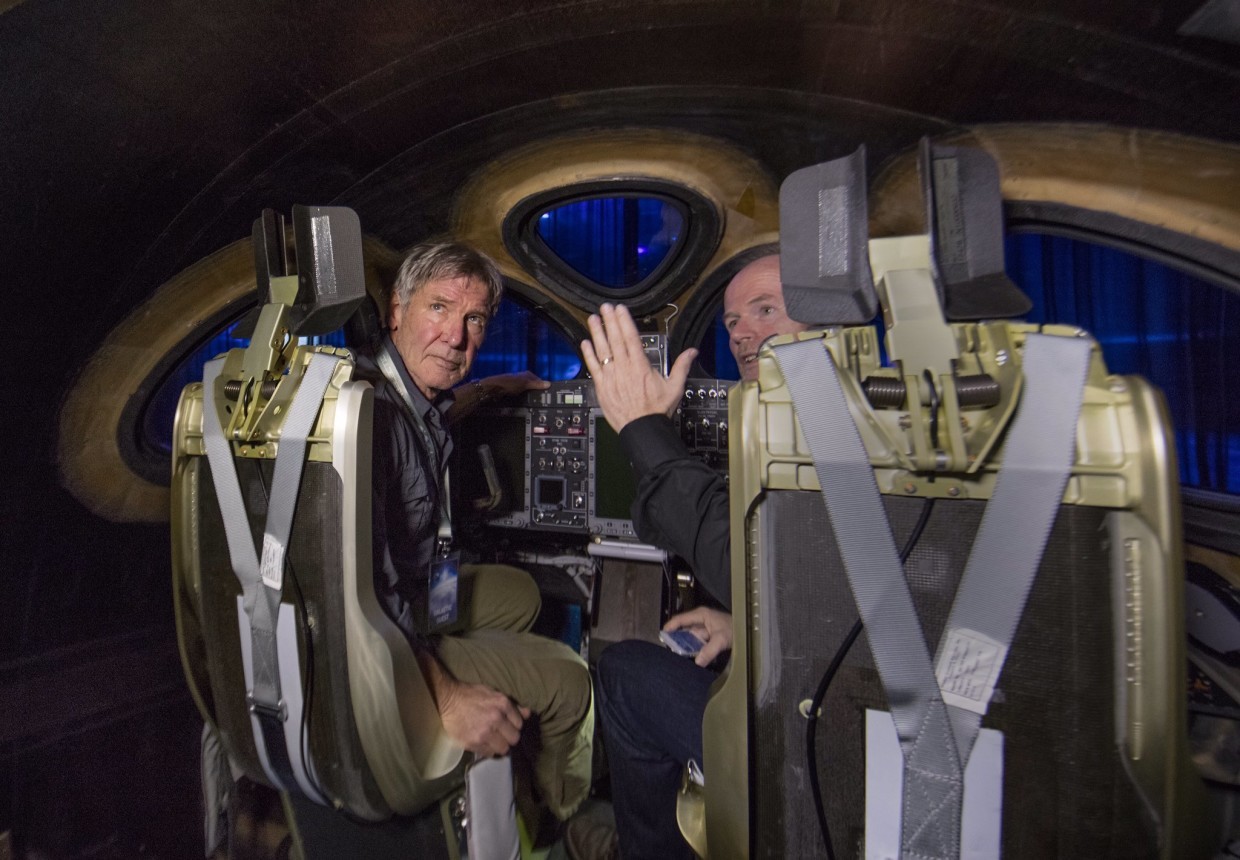 SpaceShipTwo is designed to fly up to an altitude of 45,000 feet, cradled beneath its WhiteKnightTwo carrier airplane, then break free and fire its hybrid rocket engine to carry two pilots and up to six passengers past the edge of outer space. The flight will feature a few minutes of weightlessness, a view of the curving earth beneath a black sky, and bursts of acceleration stronger than any roller-coaster ride. At the end of the trip, the plane glides back down to a runway landing.

Virgin Galactic is selling seats for $250,000, and so far about 700 would-be passengers have signed up – including some who want to fly scientific payloads. The company says about two dozen customers asked for refunds after the accident, primarily due to concerns about delays in the development schedule.

Today’s rollout marks a milestone in that schedule, but it’s just one step in a long series of tests planned in Mojave.

On-the-ground testing will be followed by captive-carry tests, during which VSS Unity will be securely attached to its WhiteKnightTwo mothership. Once Virgin Galactic’s engineers are assured that the aerodynamics are right, they’ll give the go-ahead for unpowered glide tests, and eventually rocket-powered flights.

It took more than three years for the VSS Enterprise to go from rollout to its first powered flight. But George T. Whitesides, CEO of Virgin Galactic and The Spaceship Company, said the time frame is expected to be shorter this time around, due to the experience gained during tests of the Enterprise. “In the first program, we might have done eight glide flights to approach a particular condition … we may be able to do that, instead of eight flights, in two flights or one flight,” he said.

The test schedule will reach its climax when the pilots reach outer-space altitudes – first by going above the 50-mile mark that’s used by NASA and the U.S. Air Force for astronaut status, and then by rising above the 62-mile (100-kilometer) boundary that’s internationally recognized as the start of space.

Before the loss of the first SpaceShipTwo, Branson had hoped to kick off passenger spaceflights at Spaceport America in New Mexico in early 2015. Since the accident, Virgin Galactic has been more circumspect about the timetable, saying only that commercial operations will begin when the company is confident about the spacecraft’s safety.

Meanwhile, other companies are also working on suborbital space vehicles for tourism and research. Blue Origin, which was founded by Amazon billionaire Jeff Bezos, is testing a rocket that takes off and lands vertically. It plans to start carrying unaccompanied payloads this year, and passenger trips could begin as early as 2018. Another company with facilities in Mojave, XCOR Aerospace, is working on a rocket plane that’s expected to go into testing soon.

In an overview of the test schedule ahead, Virgin Galactic said “no one is more eager than us” to send paying passengers into space.

“But this isn’t a race,” the company said. “We have shown we are committed to being thorough in our testing: It is the right thing to do and it is essential to our ultimate success. As a thousand-year-old saying goes, there is no easy way from the Earth to the stars. But finally, there is a way, and through steady testing, we will find it.”