With capital markets under pressure, many venture capital firms are slowing down their investments — but that isn’t necessarily stopping them from fundraising.

There were also just five new VC-backed companies that earned “unicorn” status (valued at more than $1 billion) last quarter globally, which is less than half of any quarterly total from 2015.

“With high-profile companies failing to live up to their private valuations, existing and potential Unicorns are coming under more scrutiny than ever before,” the report noted. “Especially in the U.S., investors are coming to believe that the high valuations in the market may not be warranted and are stepping back from making any significant mega-deals.”

However, despite the decline in VC activity and firms being more cautious in 2016, CBInsights reported that the long-term outlook is positive, noting that VC returns for the 10-year period ending Sept. 2015 were 11 percent, compared to S&P’s 6.8 percent.

“As long interest rates remain relatively low, the VC market will likely remain a good place to deploy capital,” the report noted. “The current slump compared to earlier in 2015 appears to be a result of short-term market uncertainties and some investor caution following a series of high-profile write-downs. Looking forward, VC investors are likely to focus more on finding quality companies in which to invest rather than investing in a broad spectrum of potential startups.”

But while deal flow is down, firms continue to fundraise. Thomson Reuters and the National Venture Capital Association (NVCA) reported Monday that U.S. venture capital firms raised $12.0 billion for 57 funds during the first quarter of 2016 — up 59 percent from Q1 2015, and the highest since Q2 2006.

“As witnessed over the last year, the fundraising environment for venture capital continues to improve,” Bobby Franklin, president and CEO of NVCA, said in a statement. “That’s welcome news for venture capital as an industry but even better for American entrepreneurs who will put that capital to work growing their businesses, hiring workers and driving innovation.” 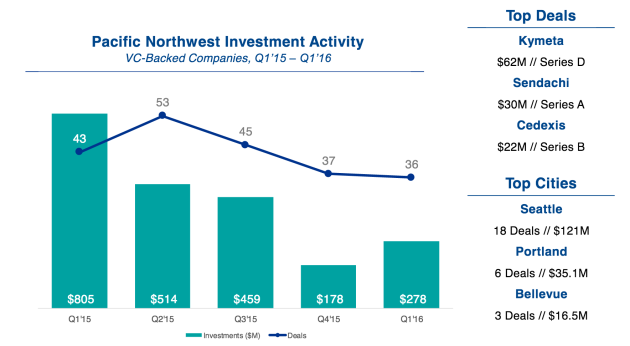