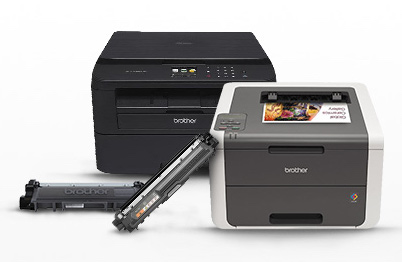 It might sound like Jeff Bezos’ fantasy— science fiction meets e-commerce — but it’s officially a reality as of today: Compatible printers from Brother can now automatically order their own ink or toner from Amazon when they’re running low.

The printers are the first devices to work with Amazon’s Dash Replenishment Service, which will leverage sensors in a wide range of devices to detect when new supplies need to be ordered, triggering an automatic purchase and order, based on the user’s settings.

The company says more than 45 existing models of Brother printers are compatible with the new service as of today. Users can activate the service via the Brother site.

Other consumer brands working to incorporate the Dash Replenishment Service include Samsung, Brita, Thync, Sealed Air, Obe, Petnet, August and Oster. Amazon today announced that Whirlpool will be integrating the technology with its Smart Dishwasher, in addition to previously announced plans for integration with a Whirlpool washing machine. Purell is also planning to link a hand-sanitzer dispensing device to the Amazon service.

The Dash Replenishment Service is a companion project to the Amazon Dash button, which lets consumers press the button to trigger a new order for whichever product (laundry detergent, Mac & Cheese, etc.) is associated with that button.