“Crazy that a kid from Nacogdoches, Texas made the cover of FIFA 15 #StartedFromTheBottom.”

That was a caption Clint Dempsey penned on an Instagram post after the Sounders striker shared the cover of FIFA 15 with fellow soccer star Lionel Messi.

Fast forward one year later, and Dempsey found himself in the FIFA video game world again. This time, the 32-year-old was in Seattle at a FIFA Interactive World Cup 2016 Host Country Qualifier, where eight of the top FIFA players from around the nation battled it out for a spot at the Grand Final in New York this March with 32 grand finalists from 17 countries.

Dempsey dropped by the event, hosted by the Sounders on Saturday as The NINETY building near CenturyLink Field, to meet the gamers and even play a bit of FIFA 16 on the Xbox One with Brian Jaldin, a 21-year-old from Arlington, Va. who ultimately won the tournament. 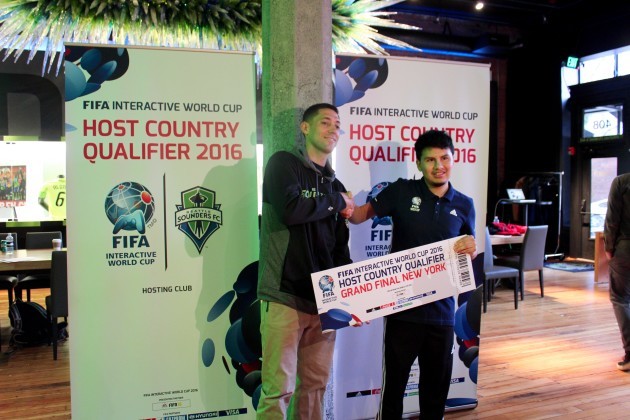 After watching Dempsey play as the virtual Sounders — it is a bit bizarre watching a real-life athlete play the video-game version of himself — it was clear he knew the basic controls but not quite at the level of the tournament players. Dempsey is actually a veteran gamer, but now that the former U.S. soccer captain has four kids, he doesn’t have much time to hit the sticks.

“I grew up and went from Nintendo to Super Nintendo to N64 to GameCube to Nintendo Wii to Xbox — I’ve always enjoyed playing games,” Dempsey told GeekWire on Saturday. “I loved playing with friends and talking trash over FIFA and Mario Kart. Then in the early stages of my professional career I got into Assassin’s Creed and The Legend of Zelda: Twilight Princess.”

His teammates certainly play, though. Dempsey said some guys even bring their consoles on the road so they can play in the hotel rooms. He pointed out Stefan Frei, Chad Marshall, Dylan Remick, and Aaron Kovar as the team’s top gamers.

Being on the cover of FIFA 15 is certainly a notable milestone for any soccer player — especially one who grew up in a Texas trailer park. But for Dempsey, who also raps under the stage name Duece, just having his own player in FIFA was an accomplishment in and of itself.

“The defining moment for any player is being able to be in the game and not having to create yourself,” he explained. “When I was lucky enough to go professional with the New England Revolution, just being in your first game, even though your ratings are down because you haven’t proven yourself, it’s still pretty exciting. It’s what you dream about, that one day you’ll be one of the players that the other kids are using in the game.”

Aside from gaming, Dempsey said he’s not much of a techie and that he’s “not really big into apps,” but does dabble with Instagram and Twitter.

He does, however, appreciate all the technology and analytics that the Sounders sports science team utilizes to help its players improve on the field and prevent injury — the latter of which is becoming more and more crucial for the 32-year-old Dempsey.

“I understand how important it is,” he said.

Still, Dempsey said it’s sometimes “annoying” to wear bra-straps with GPS trackers while on the field.

“The more they can create a way where you can wear it and not know that you’re wearing it — that would be awesome,” he said.

The Sounders kick off their season tonight against Club América — check out our report today that details how the team is shifting toward mobile ticketing.

At tonight’s season opener, Dempsey just did something straight out of FIFA, but in real life — watch and enjoy: