T. Rowe Price sunk gobs of money into companies such as Cloudera, Dropbox, Apptio and Evernote in recent years, oftentimes at lofty valuations.

Now, the giant mutual fund manager is resetting some of those bets. According to a report in The Information (subscription required), T. Rowe Price has marked down its stakes in a number of companies.

Dropbox raised its last round at a $10 billion valuation.

Bellevue-based Apptio — a rising star in the Seattle startup ranks which raised a $50 million round in 2012 that was led by T. Rowe Price — also took a big hit.  The Sunny Gupta-led company makes software to help CIOs better manage their IT departments, and it has been discussed as a possible IPO candidate.

Last summer, The Wall Street Journal reported that Apptio had hired Goldman Sachs, J.P. Morgan Chase and Bank of America for a possible public offering, with a valuation goal of more than $1 billion.

In the 2012 venture round, Apptio commanded a valuation of $600 million. It has raised a total of $136 million in venture financing.

The Information also reports on T. Rowe Price’s reset valuations on companies such as MongoDB, Upwork, SurveyMonkey and Plex Systems, and you can see the interactive graphic here.

The markdowns provide yet another example of a cooling finance market for privately-held tech companies, a cooling that was felt in the fourth quarter as venture deals and dollars slowed.

In the fourth quarter of 2015, U.S.  investors pumped $11.3 billion into 962 deals, a decline of 32 percent in dollars and a drop of 16 percent in deals when compared to the same period in 2014. High-profile companies such as Foursquare and Jawbone also reportedly raised recent rounds with valuations that were lower than previous rounds, so-called “down rounds.”

Now, things appear to be resetting, especially around the so-called “unicorn” companies that are valued at $1 billion or more. 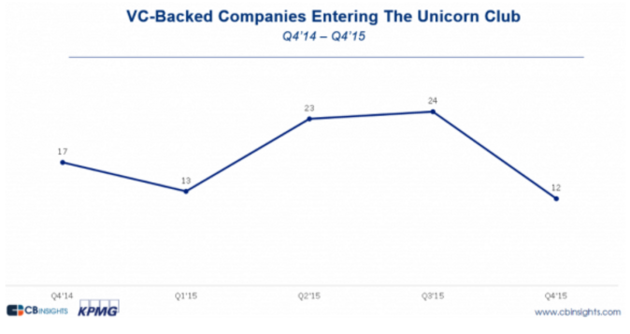 In a report earlier this month, CB Insights asked if the one-time “unicorn stampede” was turning into “wounded unicorns.” It found that there were just 12 new “unicorn births” in the fourth quarter, down from 24 companies that commanded paper valuations of $1 billion or more during the third quarter.

A number of venture capitalists also have warned that the investing climate is resetting.