Fans at Super Bowl 50 should have no problem sharing selfies and posting video from their smartphones.

RootMetrics, a Seattle-area company that provides information about the performance of cellular networks, just published a study that ranks 31 NFL stadiums based on overall mobile network data performance during the second half of this season.

Levi’s Stadium, the new high-tech venue in Santa Clara that will host the Super Bowl on Feb. 7, earned the top composite score for overall data performance when testing connections for the four major U.S. carriers. 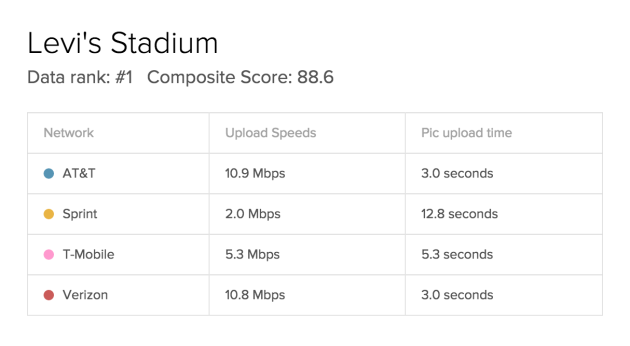 For data reliability at Levi’s Stadium, which tests how well a network stays connected for a given task, Verizon (99.5 percent), T-Mobile (99.3 percent), and AT&T (97.8 percent) scored well, while Sprint (81.9 percent) experienced minor difficulties.

“It’s important to note, however, that these numbers are subject to change based on the equipment and extra measures the venue will put in place for the game,” RootMetrics noted. “While the results from our earlier testing aren’t a guarantee, they suggest that Levi’s Stadium does offer a strong baseline of performance.”

After Levi’s Stadium, Carolina’s Bank of America Stadium ranked No. 2 for overall data performance, with Arrowhead Stadium in Kansas City coming in at No. 3. CenturyLink Field in Seattle finished ninth.

Overall, Verizon was the top-performing network across all NFL stadiums, with AT&T, T-Mobile, and Sprint following, respectively.

Here’s more about how RootMetrics conducts its in-stadium connectivity testing:

To evaluate how well each network handles typical consumer data demands, we use off-the-shelf smartphones to test network data performance under typical conditions at densely populated event venues across the US, with each venue tested at least once per year. Testing is conducted during the entirety of each event; samples are collected both while seated and while walking along concourses, near concession areas, and other publicly available areas. In addition to capturing download and upload speed, we test each network’s data performance during consumer-based activities such as checking email or during web/app usage. The top-performing data network(s) at each venue earns our RootScore Award as a mark of excellence in our consumer-focused testing.

As more and more people use their smartphones while attending live games, networks are working to improve connectivity at the stadium, while teams are beefing up their own infrastructure and adding WiFi networks.

At a Seahawks Mobility Summit earlier this month in Seattle, Extreme Networks Executive VP of Marketing and Corporate Development Norman Rice III said that two years ago, there was about 1 terabyte of data used by fans on its WiFi networks at an average NFL game. That number spiked to 4 terabytes this season.

“That’s a ridiculous exponential growth of data and just a microcosm of what’s happening in the marketplace and the world,” Rice said.