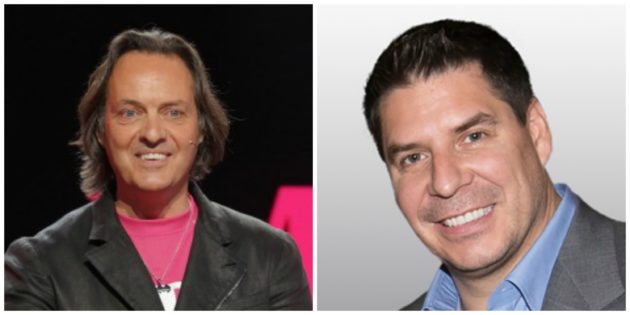 Sprint CEO Marcelo Claure and T-Mobile CEO John Legere don’t seem to like each other.

Shortly after T-Mobile’s announcement, Claure responded to a tweet describing details of the plan:

sounds like a crappy plan to me….real one is out in 5 minutes

Sprint, the nation’s fourth-largest carrier behind third-place T-Mobile, then announced its own unlimited data plan called “Unlimited Freedom,” offering one line of unlimited talk, text and data for $60 per month, an additional $40 per month for a second line, and $30 a month each for lines 3-to-10.

The beef between the CEOs continued Thursday morning, with Legere accusing Sprint of “copy-paste,” and Claure calling Legere a “con artist”:

It takes 5 mins to copy-paste… and a lot longer to build the right network.

you truly are a con artist. No doubt. Good luck.

Claure then accused Legere of copying Sprint’s idea after seeing the company’s marketing trials for the unlimited plans.

5/9 @tmobile & @JohnLegere, so nice of you to follow us after our successful #unlimited marketing trials.

“Somebody who basically steals an idea because we are running tests — and he knows exactly that we are launching this tomorrow — and goes for an emergency press release, because it was the fastest press conference ever, and basically copycats what we were doing — sorry, to me that’s a con artist. … If we were copying his idea, how in world could we be ready to launch this tomorrow, while he cannot launch until September 6? He got ahold of an idea, he called an emergency press conference, and now he has to get his systems and everything ready. We are launching this tomorrow. We are ready to launch and ready to go. Somebody who does that, and who basically has the audacity to say that we are copying and pasting, is a con artist.”

During the same interview with CNBC, Claure was asked about a potential merger between Sprint and T-Mobile, which nearly happened in 2014 but never came to fruition after U.S. regulators expressed concerns. Claure said “we always believe a combination of the two smaller carriers will make a formidable competitor, nothing has changed.” Then he added this:

“It might be sad for [Legere], because if that were to happen, he would probably get booted out.”

Later in the interview, Claure was asked about Legere’s marketing tactics — the T-Mobile CEO is well-known for his presence on Twitter, where he has nearly three million followers compared to Claure’s 129,000.

“When you are fighting someone like Legere, you need to go down his level and fight at the same level,” Claure said. “That’s only way he will understand.”

Claure continued to go after Legere on Twitter on Thursday. This is not the first time the CEOs have battled on the social network.

However, Claure did say on CNBC that “this is not about Legere.”

“This is about us pretty much having the best competitive rate plan in the industry and this is about offering unlimited to the American consumers,” he said. “This is about something that neither AT&T or Verizon can get to. And if there’s one thing that John is right about, with 73 percent of the customers on the other two networks … the beautiful thing is now we are catching customers from all three networks.”

“Isn’t that the guy whose owner woke up yesterday and panted that he loves T-Mobile?” Legere told CNBC. “I mean, the Verizon guy may have switched to Sprint, but I think the Sprint owner might have switched to T-Mobile.”

It’s just small noise from an amateur Twitter guy that should stay in the shallow end of the pool. He shouldn’t play with the big boys.

Legere continued and said T-Mobile’s announcement today was not about Sprint.

“This is about us going directly after Verizon and AT&T, whose networks cannot handle this,” he said.

Asked about the potential merger and possibly “sitting at the same Thanksgiving table” as Claure, Legere said “I would throw potatoes in his face.”

CNBC also asked Legere if the beef between him and Claure was just for show, or if the CEOs actually dislike each other.

“Listen, everything I do leading the Uncarrier is for my customers and for employees,” Legere said. “It’s just small noise from an amateur Twitter guy that should stay in the shallow end of the pool. He shouldn’t play with the big boys. But I take nothing personally and I move from no fight, so bring it on.”