Tech brings in big, young money. That’s according to a new report from Zillow, which ranks the top U.S. cities for wealthy millennials, based on U.S. census data. The study revealed that cities with thriving industries, like technology, had the highest concentration of young people (under 34) with a household income of more than $350,000 per year.

Zillow’s hometown of Seattle tied with Silicon Valley’s Sunnyvale for number five. In both cities, moneyed millennials make up 3.9 percent of the population. San Francisco, often criticized for becoming a playground for rich, young techies, came in second with a whopping 7.8 percent. 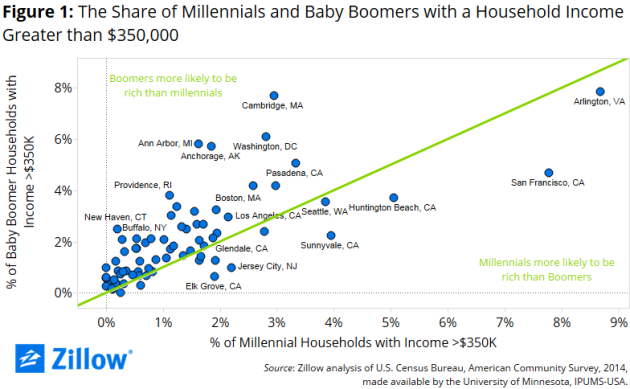 It’s no coincidence that three out of the five cities most likely to have wealthier millennials than baby boomers are tech hubs. Tech brings in more money and allows young people to climb the ranks much faster than many traditional industries. But young people with deep pockets can create unique challenges in these regions. Seattle and the Bay Area are grappling with housing affordability crises, as huge numbers of well-paid young tech workers look to rent and buy.

“Inventory is pretty tight given how many people are looking for homes, especially first-time home buyers. If you think about a lot of the millennials that are active in tech, buying their first home, they’re having an especially hard time breaking into those markets and affordability is becoming a real issue,” Svenja Gudell, chief economist at Zillow, told GeekWire. “You have millennials that would like to buy but they can’t because there are not a lot of homes for them to buy, so you just have a lot more renters now and there aren’t enough rental units out there. So, over the last two or so years, we’ve seen very rapid rental appreciation.”

Wealthy millennials, who tend to have fewer financial burdens, often have more to spend in these tight markets, putting a squeeze on lower-income residents. This phenomenon is even more extreme in the Bay Area, causing many tech workers to the south to consider migrating to Seattle, where their dollar goes further.

Arlington, Va., the sleepy military town where many hang their hats because of its proximity to Washington, D.C., ranked first on the list. It’s important to note, however, that Arlington is a wealthy city overall. The city also has the highest concentration of rich Baby Boomers. The region is a magnet for lobbyists and lawyers serving the Capital, says Zillow, so perhaps its ranking isn’t so surprising after all.

Here are cities with the most wealthy millennials: