Terry Myerson, executive vice president of Microsoft’s Windows and Devices Group, made a surprise appearance at the Samsung keynote address at CES this morning, talking about the “renewed partnership” between the companies and their “commitment to joint innovation.”

That includes a collaboration on Internet of Things technologies. During the keynote, Microsoft showed Windows 10 communicating with Samsung appliances — asking Microsoft’s Cortana virtual assistant whether the washer was done, for example, and using Windows to analyze washer usage trends by specific family members. The system used Microsoft’s Power BI data visualization tools to show the data.

“With Samsung, we’re excited to have this shared vision of millions and millions of devices and things communicating using open protocols and open standards, creating opportunity for software developers, device manufacturers and rising-star makers around the world,” Myerson said during the Samsung keynote.

He noted that universal apps written for Windows 10 will be able to work across everything from desktop computers to small Internet of Things devices. Microsoft is also banking on this universal app strategy to bolster the catalog of apps for Windows-powered smartphones, sparking controversy among some high-profile shareholders.

Samsung and Microsoft have worked together for decades on Samsung computers running Windows. In recent years, Samsung has been using Android for its devices, a high-profile example of the challenge facing Microsoft’s Windows business. However, Microsoft and Samsung have had a warmer relationship since settling a patent suit a year ago. For example, Samsung’s Android-based Galaxy S6 comes with Microsoft apps pre-installed. 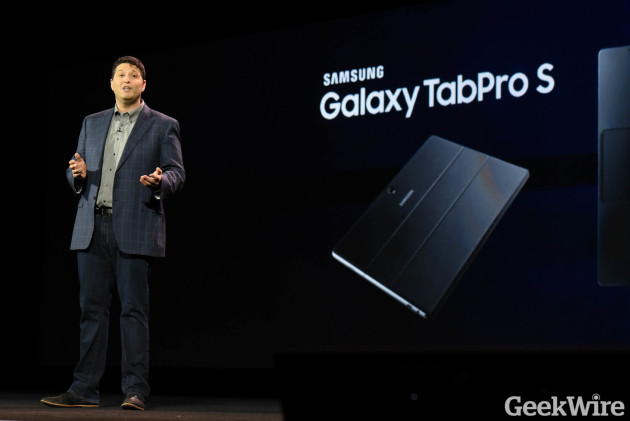 The Windows 10-powered Galaxy TabPro S, announced this week, is scheduled for release in February. Pricing hasn’t yet been announced. It was part of an array of third-party Windows devices showcased by Microsoft at a private event on Wednesday night at CES.

“To have a renewed partnership with Samsung is very exciting for us,” said Myerson in an interview with GeekWire at the Wednesday event. “It was a big decision — they branded it Galaxy, put the S on it. We’re honored. It’s a great device. We’re excited for Windows 10 users that choose it.”