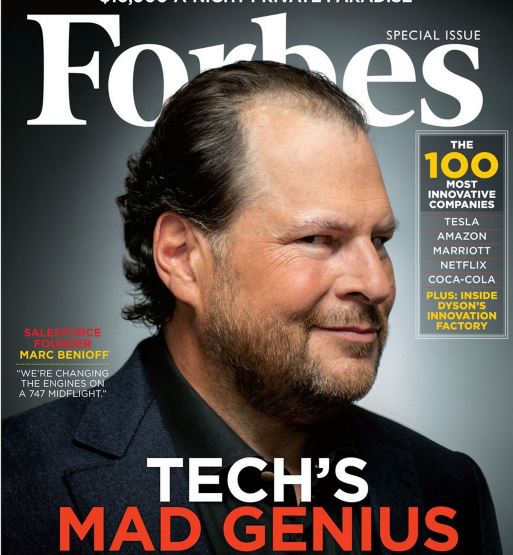 Salesforce is at work on an artificial intelligence-related product called Einstein, according to a lengthy profile of CEO Marc Benioff that’s online today and is set to appear in the Sept. 13 issue of Forbes.

According to the piece, the Einstein project explains why Benioff spent $390 million two years ago buy responsive-email company Relate IQ and to hire its CEO, Steve Loughlin. It also explains why Salesforce has bought at least six AI startups since then and why the CEO of one of those acquisitions, MetaMind’s Richard Socher, a Stanford AI academic, will build Salesforce’s first research lab.

“If this is not the next big thing, I don’t know what is,” Forbes quotes Benioff as saying.

The product is set to launch at Salesforce’s Dreamforce conference Oct. 4-7 in San Francisco, according to the report. Salesforce declined to comment. The Forbes profile portrays Benioff as a hyper-energetic co-founder/CEO with a strong social conscience who has built an innovative 17-year-old company that has grown fast but now needs new innovation to continue to flourish.

The company is one of several tech giants using acquisitions to move further into artificial intelligence. In another recent example, Apple acquired Seattle-based machine learning startup Turi for about $200 million.

Salesforce, which competed unsuccessfully against Microsoft to acquire LinkedIn, is the world’s fourth-largest enterprise software company, with a $54 billion market cap. Research firm Gartner ranks it first in customer service and sales software, third among marketing-software makers and fourth in commerce. Its biggest rivals are Adobe, Digital River, Microsoft and SAP, depending on the segment.