Startups and venture capitalists are feeling a bit “down.”

The number of so-called “down rounds” — where a venture capital investment is valued lower than the previous financing round — increased during the second quarter.

The trend signals a cooling in the venture capital market, indicating that entrepreneurs no longer command the lofty valuations they once did and investors who back private companies are resetting expectations.

According to Cooley’s Q2 2016 Venture Financing Report — which analyzed 154 deals from the law firm —the dreaded “down round” made up a whopping 21 percent of all deals in the second quarter. That was nearly triple the number when compared to previous quarters.

The law firm of Wilson Sonsini Goodrich & Rosati, which works with a number of startup companies, also identified the trend in the second quarter. According to its Entrepreneurs Report, down rounds increased by four percent over the previous quarter.

One reason for the increase in down rounds is that the shine has come off the horn of the so-called unicorns — those private companies with historic valuations of $1 billion or more. Venture capitalists heaped massive dollars and valuations on a number of these companies in recent years, but now those valuations are falling.

You can see this sharp decline in the valuations of later-stage companies by tracking the series D financing valuations (see chart below), which peaked at more than $400 million in the third quarter of 2015, but since have plummeted to below $200 million.

Bill Bryant, a Seattle venture capitalist with DFJ, offered a gloomy take, saying that “the true day of reckoning lies ahead” for overvalued startup companies and “will hit home in the next several quarters.”

Bryant noted that valuations peaked last year in the first and second quarters, with companies trying to raise about 18 months worth of cash.

“As the market multiples compressed through the back half of 2015 and early 2016, these companies would have extended their runway by reducing expenses and perhaps circling the wagon with existing investors by raising a bridge that postponed the inevitable hard discussions with new investors,” said Bryant. “At some point soon, the companies that raised in peak times will have to convince new investors of their worth. That is going to be a long and difficult conversation.”

Boris Wertz, a venture capitalist at VersionOne Ventures, whose portfolio includes startups such as Outreach and Indiegogo, said his portfolio companies have not been hit by down rounds in recent months.

But Wertz said they are prevalent in the market, both in the late and early stage financing rounds.

“A lot of people try to be creative to avoid a down round, e.g. by keeping the price of the previous round, but awarding warrants to sweeten the deal — so from the outside you can communicate that you didn’t do a down round, but technically it is,” said Wertz, adding that the trend will likely continue for at least another 12 to 18 months.

The true day of reckoning lies ahead and will hit home in the next several quarters.

Craig Sherman, a Seattle attorney with WSGR who works on a number of startup financings, said he saw a small increase in down rounds during the second quarter. But he said the statistics do not fully reflect the change in the market.

“Many companies are either doing unpriced convertible note financings or delaying raising money in the hope that the market will improve later this year or early next year,” said Sherman. “Both nationally and locally, we’re seeing healthy levels of activity in the venture market, but meaningfully lower activity than a year ago.” 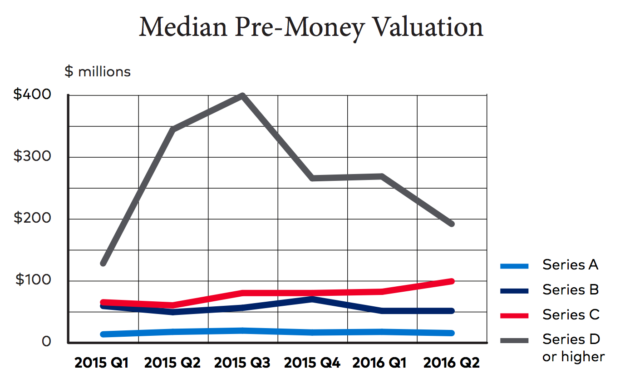