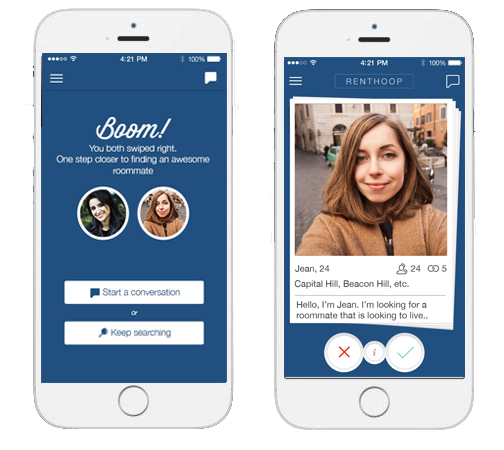 Fresh out of college, Paul Burke went to hear Zillow and Expedia co-founder Rich Barton speak at a Startup Week event in Seattle. His mother, who also attended, expressed concern to Barton about her son’s entrepreneurial ambitions.

“Go for it,” Barton said, later adding that “he is the most risk-loving and capable of taking risk on in his career at this point … than at any point in the future.”

“Our goal is to help people have amazing roommate experiences and the best way to do that is to be the most popular way for people to find roommates across the country,” Burke said.

The app, which launched in May, uses the swipe-to-sort model popularized by Tinder. It integrates with Facebook so users can connect with people in their network.

We caught up with Burke for this Startup Spotlight, a regular GeekWire feature.

Explain what you do so our parents can understand it: “Mom, you know that app where people swipe right to find a date? RentHoop is like that, but instead of finding a date, you get connected with potential roommates.”

Inspiration hit us when: “I’m a 24-year-old recent college graduate. After school, I moved home with my Mom. I got a job, saved some money — a pretty typical story for most people who are in my position. After a few months I looked to move from my Mom’s house and tried the typical places one might look for a roommate, like Craigslist, and it was a super frustrating experience. I thought there had to be a safer and more fun way to connect people my age who need roommates.”

VC, Angel or Bootstrap: “Bootstrap, for now. We’ll be raising in the next couple of months. Not having any outside money besides what I’ve saved while living at home has been a beautiful constraint actually. It’s forced us to be more creative in our marketing efforts and allowed us to just do one thing really well instead of stretching ourselves too thin.”

Our ‘secret sauce’ is: “We relate to our audience better than any other company in this space. I think that matters a lot when you have a product aimed at helping college students, postgrads, and millennials. Social media has been instrumental in our growth and will continue to.

Our product is also extremely easy to use and takes what is normally a mundane process and makes it a lot fun.”

The smartest move we’ve made so far: “Simplify the product. It’s not about reinventing the wheel, it’s about tweaking an outdated process for people of this generation.”

It’s not about reinventing the wheel, it’s about tweaking an outdated process for people of this generation.

The biggest mistake we’ve made so far: “Too many to list, honestly. From a product standpoint, there is definitely an order of operations when building an app and I’ve learned from messing up that we could have gotten our product out a lot faster had we been more aware of those.

I also wish that I was more clear early on with the direction of RentHoop and the responsibilities that come with working for a startup with no funding.”

Would you rather have Gates, Zuckerberg or Bezos in your corner: “Bezos. Amazon is such a large company yet they operate like a startup in many ways. That’s been a huge advantage for them because they continue to swing for the fences and innovate despite some failures in product (like the Amazon Phone).”

Our favorite team-building activity is: “We got a pedicure to celebrate our successful launch. It was definitely not my idea, but I can’t deny that my feet feel incredible and our team had an awesome brainstorming session.”

The biggest thing we look for when hiring is: “Will you work for free? Because we don’t have a budget to pay you. That sounds crazy to most people, but if you’re willing to make as many sacrifices as our team has made, you are definitely ‘down with the cause’ and invested into making RentHoop the best it can be.”

What’s the one piece of advice you’d give to other entrepreneurs just starting out: “You don’t have to go ‘all-in’ right away. Our team has made sacrifices in our personal lives to get RentHoop off the ground while we worked jobs. As long as you have a team committed to going through the obstacles that your startup will surely face, you have a chance to make it.