Redfin has a message for homebuyers in its hometown of Seattle: Don’t give up yet.

The real estate site’s July market report shows new housing inventory in the region is up 7.6 percent from July 2015.

“This is the second straight month with a significant year-over-year increase in new inventory and Redfin real estate agents are encouraging homebuyers to come back to the market,” said a Redfin spokesperson.

Many Seattle homebuyers are giving up, frustrated by bidding wars, cash offers, and homes selling well over asking price. Competition for properties on the market has exploded in recent years, due to a tech-driven population boom.

But Redfin, a tech and real estate company uniquely positioned to comment on Seattle’s housing crunch, says buying now may yield better results. New inventory is coming on the market and competition among house hunters tends to slow in the summer.

That’s not to say it’s a great time to buy. Seattle is still tied with Denver for the lowest supply of housing inventory in the nation, and homes for sale in the region only stay on the market for an average of eight days. Seattle’s median home sale price in July was $450,000 —a 9.8 percent increase over this time last year — and the number of homes sold is down 4.7 percent, year-over-year.

“There is still going to be competition, but it will be more along the lines of two to three offers instead of the 10 to 20 we saw during the spring,” said Redfin’s Kyle Moss in a statement.

Nationally, home sales fell 10.9 percent and the median sale price increased 5.3 percent in July. But Redfin cautions not to make too much of that dramatic drop. The company’s director of analytics says the decrease is mostly due to last month’s lack of business days (when home sales usually close).

Redfin’s national market summary for July is below and the full report is available here. 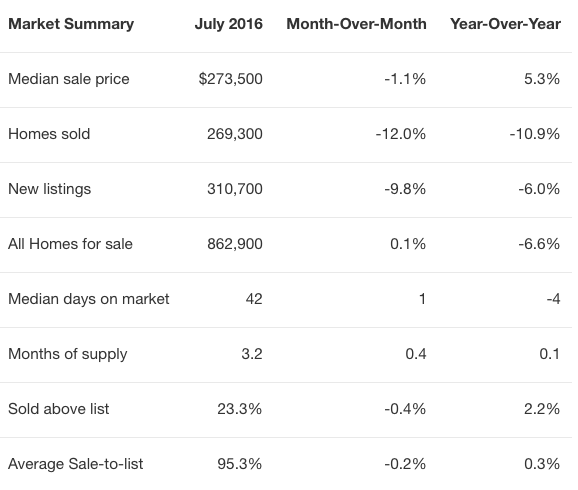