Think of the fabled “Tron” light racers from the movies and games of the same name and you’ll have an idea of what an unusual new power system for electric bikes look like. But this real-live “Tron” electric bike wheel differs significantly from the sci-fi version.

“We call it the GeoOrbital wheel because we put the stationary [motor] assembly inside of an orbital wheel which contains the electronics and the battery,” said Dakota Decker, the CTO for Cambridge, Mass.-based GeoOrbital. “That’s what we’ve patented.”

We spoke recently on his trip to Seattle with a pre-production model of the company’s new bike wheel.

It provides speeds up to 20mph with roughly a 20-mile range on flat surfaces, and gets you up to full speed in about six seconds. Depending on how much you pedal, whether the surface is flat or hilly, your weight and the size rim you choose, you could get your distance up to as much as 50 miles.

The unit is also novel. It’s a front-wheel assembly and fits on virtually any bike, with two different rim sizes available to accommodate 26-, 28-, and 29-inch bikes as well as 700C bikes. Adding it to any bike — or removing it for security reasons — takes about two minutes including the wheel, the throttle that fits on the handlebar, and a rear-wheel control wire. The throttle is thumb-operated and contains a light sensor telling you your battery condition. 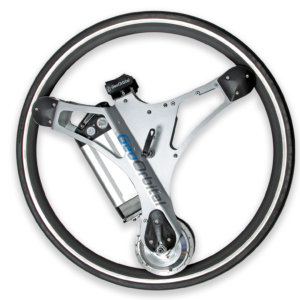 The wheel runs on a standard electric bike/scooter two-hub 500W brushless DC motor. The motor itself rotates. But because of GeoOrbital’s unusual design, the company created a customized rubber strip for the motor to rotate the rim. A flatproof solid foam tire completes the assembly.

“It’s an off-the-shelf rim,” said Decker. “We just had it made without spoke holes because, obviously, we don’t need that anymore.”

The motor sits within a triangle-shaped structure supporting the rim. The motor is both the third strut and the power source. A lithium ion battery powers the wheel with a current four-hour recharge time. Decker acknowledged that a fast-charging Li-Io battery could be a future feature but would probably add to the price.

The GeoOrbital unit debuted Monday as a crowdfunded project on Kickstarter. Early bird buyers got it for as little as $600; the full retail price (MSRP) will be about $850.

The concept behind the GeoOrbital wheel came from CEO Michael Burtov, who built the prototype from junkyard and toy parts. Their offices are located near MIT, which makes for a steady pool of talented interns, he added.

So how does it feel when riding it? I tested the bike wheel on the grounds of the Seattle Center. Because its power source is on the front, the bike initially felt slightly heavier and less flexible than a standard bike. Once I thumb-activated the throttle the bike felt both easy to navigate and powerful. It took less than two minutes to become accustomed to the bike powering me instead of me pedaling. In my final (but short test), I drove it up the short hill to the west of Key Arena and was pleasantly surprised at how easily it powered me up hill. I am not precisely a featherweight.

This project is only the first for the company. It could be used for off-road bikes, but with a far more powerful motor. They are also looking at the wheelchair market. “Electric wheel chairs are absurdly bulky and heavy,” Decker said. “It’s a decent market but it’s harder to get into. The massive bike market is ripe for the picking,” he said with a laugh.